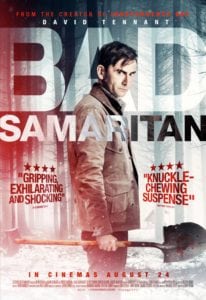 Two valet attendants have developed a clever scam – as wealthy patrons enjoy their meals, one of them drives to the patron’s home to burgle their property while the other one is on guard duty. This has worked for them for so far until they cross the wrong customer. 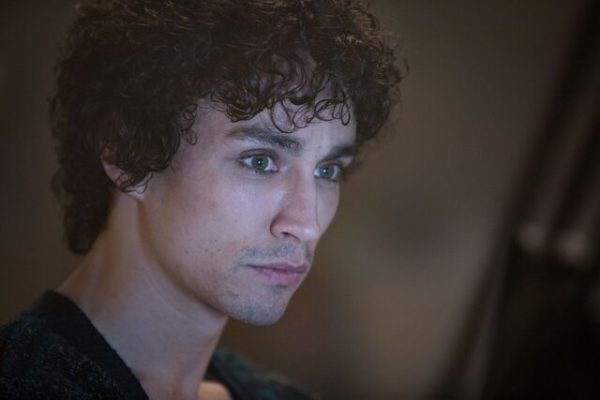 Sean (Robert Sheehan) is a lazy faux-photographer working part-time as a valet attendant with his partner-in-crime Derek (Carlito Olivero). They are looking for that big score. An arrogant, vitriolic trust-fund douchebag called Cale (brilliantly portrayed by David Tennant) looks to be the perfect target. Sean takes Cale’s car and drives to his expensive real estate. It’s perfect until he discovers a beaten woman bound to a chair. Sean is faced with a dilemma: does he report the woman to the police and risk jail time, or does he walk away? What then unravels is a tense, if contrived, game of cat and mouse.

Make no mistake about this, Bad Samaritan is a smart, yet trashy, horror-thriller. It’s a wholly disposable and utterly flawed story. Sean’s moral choices lack character conviction, becoming the good-anti-hero in a too short a period of time.

More head-scratchingly implausible factors derive from Cale’s God-like planning, and his quasi-sci-fi technology to aid him. As Cale grows to know that Sean knows about the woman, and about Cale’s psychotic private life, Cale grows his seemingly telepathic powers as he slowly destroys Sean’s life. He appears to be able to do this flawlessly. 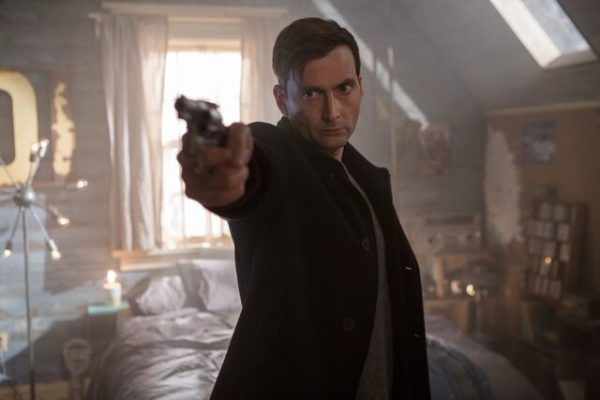 Yes, it’s a daft thriller. But what really sells it is David Tennant’s performance. It’s clear that Tennant is loving the character is portraying. The game of cat and mouse between the two is sold on Tennant’s performance. Tennant takes this motivation, and this character as the sociopathic smartest-gun-in-the-room syndrome, and runs with it! Smarmy, cold, arrogant, vulnerable – Tennant gives us a full-fledged character, all with a loud wink to the audience.

Sheehan plays his straight, with one wondering if he’s in on it as well? Fans of the British TV show Misfits will know that this actor oozes charm and has a great on-screen presence.

Where this film succeeds is the on-the-edge pacing, as every bad decision made by our guideless protagonist Sean escalates to death, destruction, and wreckage beyond belief. Cars are wrecked. Rooms are blown-up. Nude photos of Sean’s girlfriend are shared among her classmates. And that’s just for starters!

To pull this film apart would be a disservice to your viewing experience. Even with the flaws highlighted at the beginning of this review, you will overlook them and enjoy this trashy, pulpy thriller. Enjoy the ride!