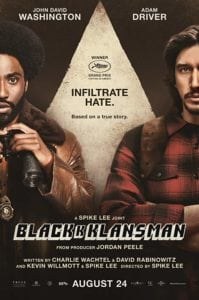 Ron Stallworth, an African-American police officer from Colorado, successfully manages to infiltrate the local Ku Klux Klan with the help of a white surrogate. 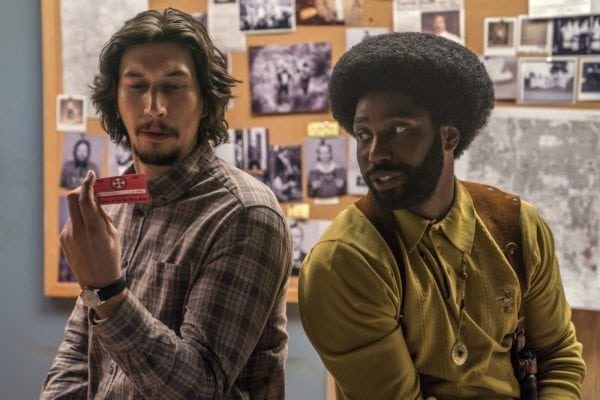 BlacKkKlansman tells the story of real-life police officer Ron Stallworth’s (John David Washington) undercover mission to infiltrate the KKK. However, Spike Lee is less interested in telling the story as it happened and more interested in using it as an allegory for the current political struggles occurring in Trump’s USA. And for the best.

The central focus of BlacKkKlansman is of course Ron’s infiltration of the KKK, which sees him pose as a white man over the phone while his white partner Flip Zimmerman (Adam Driver) fills in when he needs to meet with the KKK in person. Both Washington and Driver put on excellent performances, but it’s Washington who steals the show. His sense of timing is impeccable, and he exudes charisma from every pore.

The KKK themselves are made up of a ragtag bunch of degenerates, all of whom are despicable, but none more so that Felix (Jasper Pääkkönen) who constantly harasses Flip, suspecting him to be Jewish. Credit must be given to Jasper for making his character stand out as the most unlikeable in a group of vile racists, especially seeing as he isn’t even their leader.

Running parallel to the KKK arc is a romantic subplot involving Ron and the president of the Black Students’ Union, Patrice (Laura Harrier). This subplot gives Ron’s character space to breath, showing him to be rounded human being with complex desires and beliefs. He finds himself torn between his job and his love life and is constantly trying to reconcile his actions with Patrice’s philosophy, as she believes that even though his work for the police may be of some use, he is still supporting an institution that oppresses black people, and is therefore, in some sense, the enemy. This complex dynamic is BlacKkKlansman’s strongest feature, as it is something that is so rarely found in cinema. The KKK are clearly the antagonists, but there are different factions of protagonists, and all have their own specific ideologies and solutions for getting rid of racism. Ron believes that the best way is to tackle institutionalised racism from the inside and then use the institution to solve external racism. Patrice thinks that every solution must come from the outside, and that to even fraternise with the police is to become like them.

It seems to me that Spike himself favours the former, even saying in a post-screening interview that he wants the film to convince people to go out and vote (to change things from within the boundaries of the system). However, he does a good job of pointing out the problems both methods face, while still maintaining that even with their flaws (some of which are quite serious) none of the activists are as bad as the racist enemy they are trying to defeat. A far subtler and truer to life observation than a certain president’s “blame on both sides” statement – a statement that is actually cut into the film in its closing moments.

As mentioned at the beginning of the review, it is clear that Spike Lee wishes to use the story of Ron Stallworth to tell a cautionary tale for the present day. Though some figures (see Boots Riley) have pointed out that there are a number of anachronisms in the film – the most important being that the police are presented in too favourable a light – I do not believe that this is to the detriment of the film. The core message, as far as I can tell, is that people should unite against the common enemy, and that infighting is not helpful when a larger threat looms. Whether Lee sees the larger threat as Trump himself, or simply the radicals that have come out of the woodwork thanks to Trump’s presence, is unclear, though largely unimportant.

With such a heavy political overtone, you might wonder if BlacKkKlansman becomes lectures. It doesn’t. If you strip away the philosophy and the politics, you are still left with a very well made, entertaining film. Though the editing feels a little clumsy at times, the direction is generally solid and there are some incredibly powerful and moving shots. There are also occasional flashes of misdirection achieved by match cuts which are particularly effective, and Lee’s trademark dolly shot hasn’t been left out. The writing is excellent, giving the film a wonderful comedic edge without detracting from the serous subject matter, and elevates each performance.

In short, there’s not much bad I can say about BlacKkKlansman. Its political message is nuanced and well presented, the cast are brilliant, and the whole film has been put together with great care and a real sense of style. It’s possibly Spike Lee’s best film to date. Do not miss it.