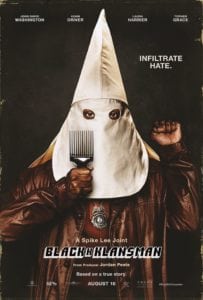 Ron Stallworth, an African-American police officer from Colorado, successfully manages to infiltrate the local Ku Klux Klan with the help of a white surrogate, who eventually becomes head of the local branch.

Opening with a disturbing and sickening racist tirade from Dr Kennebrew Beauregard (Alec Baldwin – who I think must have been chosen based on his Donald Trump skits for SNL), the tone for BlacKkKlansman is clear from the start. Based on the real life story of African American police officer Ron Stallworth (John David Washington) who infiltrated a local Ku Klux Klan group with the help of a white officer, BlacKkKlansman is an intense, horrifying and also funny drama.

The real life story does contain a lot of shocking elements that are included in the film, however, there have been some creative liberties included which may frustrate some viewers. But BlacKkKlansman isn’t a biopic, it is a blistering and relevant piece of cinema that shows how the African American experience is not all that different from the 1970s. As the film ends we see scenes from the Charlottesville riots of 2017 intercut with Donald Trump’s infamous speech about their being “very fine” people on both sides. Spike Lee has always been a provocative filmmaker and yet BlacKkKlansman feels like a statement of fact rather than an effort to provoke. He is addressing the fact that the issues faced by black people are still prevalent in today’s society and that hate is still rife.

What is handled extremely well is the tone throughout the film. There is a lot of humour throughout but it is also horrifying and uncomfortable to watch. In one standout sequence, a scene of the Ku Klux Klan going through their formal ceremony is edited alongside a black student community meeting where an ageing activist called Jerome Turner (played expertly by Harry Belafonte) describes a lynching he witnessed in horrific detail. This then moves on to the African American staff of the hotel where the clan meeting is taking place joking about how they shouldn’t have taken this gig. It’s not easy to balance material as upsetting as this but they’ve managed it. 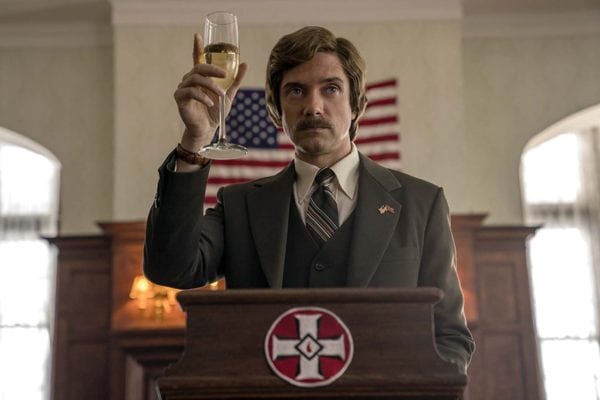 The central performances are fantastic and I’d be surprised if there weren’t some Oscar nominations or winners amongst them. In the lead is John David Washington (son of Denzel) as Ron Stallworth who is effortlessly charismatic and who emotes so much through a simple look. Adam Driver is on hand as Flip Zimmerman, the white cop who acts as his surrogate for face to face meetings with KKK. Driver adds to his list of exceptional performances with a quiet and understated performance. The clan members themselves are portrayed as unhinged, ignorant and abhorrent with an unsettling performance from Jasper Pääkkönen as the militant racist Felix.

Set in the 1970s, the look and feel of the film is exquisite. From a varied soundtrack to production design, cinematography and more, it’s a visual delight, despite the subject matter being so ugly. Lee ends the film with the image of Heather Heyer who died during the Charlottesville riots with the simple epitaph Rest in Power. It’s a bold statement that needs little explanation.