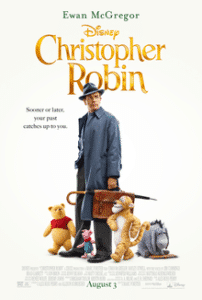 Christopher Robin is the feel good film and the warm welcome hug that you don’t realise you need until you’ve sat through it with big dumb grin on your face. It’s schmaltzy, cheesy, predictable and despite all of these things absolutely wonderful.

After an opening sequence which shows Christopher Robin playing with Winnie the Pooh et al, he grows up (into Ewan McGregor), meets his wife Evelyn (Atwell), battles through World War 2 and comes home only to become obsessed and downtrodden with his work. Rejecting his family and not having any sense of fun, Pooh (Cummings) takes him back to Hundred Acre Wood to find his friends. On the way they help him rediscover his sense of fun and adventure.

In terms of plot, Christopher Robin has the most in common with Steven Spielberg’s Hook which has the same premise but focuses on Peter Pan. The theme about leaving behind adulthood and finding out what’s truly important is central. As I’ve mentioned, the film is completely predictable from start to finish, but it somehow works and the cheese only adds to the enjoyment. Christopher Robin will in all likelihood be loved by those of us who grew up with the books and the cartoons and who are instantly transported back as soon as we hear Jim Cumming’s familiar voice.

It is in the voice work that Christopher Robin is strongest. Supporting Cummings is Brad Garrett as Eeyore, Nick Mohammed as Piglet, Toby Jones as Owl, Peter Capaldi as Rabbit and more. Each performance is on point and delivers the humour. The jokes aren’t complex and there are none that only adults will understand but in the context of the film it works.

As Christopher Robin, Ewan McGregor delivers a decent performance. As an actor he’s always had the ability to switch from playing uptight stoic characters to someone looking at the world with wonder and excitement. His interactions with the animatronic and CGI characters is believable and he cuts through the overly sincere dialogue and cringey moments easily. Atwell as his frustrated wife Evelyn is good but her character is under developed and doesn’t get much screen time.

Ultimately Christopher Robin is the type of film that’s needed in a time when we’re all concerned about Brexit, Donald Trump, terrorism and natural disasters. It’s a breath of fresh air and a piece of mindless escapism that taps into a simpler time when we could all use our imagination, have fun and not take anything too seriously.