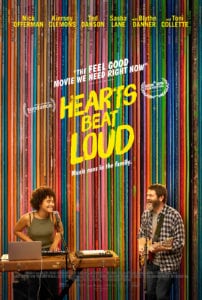 Frank has run the local record store for 17 years but it’s not making money, so he’s closing it down.  At the same time, his only daughter is preparing to go away to college.  Both share a deep love of music and become an unlikely song-writing duo at a time when they discover more about themselves, their relationship and life in general. 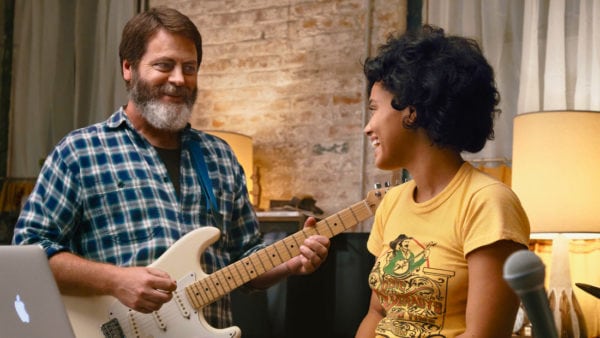 One of the surprise hits of this January’s Sundance is an unassuming little story, one laden with warmth and charm.  Frank Fisher (Nick Offerman) runs a record store which is something of a fixture in Red Hook.  But nostalgia, as they say, isn’t what it used to be and the place isn’t making any money, despite the upsurge in the popularity of vinyl.  He has no choice: the place has to close.

It coincides with another big change in his life, the departure of his only daughter Sam (Kiersey Clemons) for college.  They share a deep love of music, jam together regularly and, unexpectedly, start writing songs, one of which he puts on Spotify.  It becomes something of an indie hit and is the Hearts Beat Loud of the title.  The life changes don’t stop there.  Sam has a girlfriend so will she still go to college?  There’s Frank’s relationship with his landlady, Leslie (Toni Collette): will they, won’t they, should they, shouldn’t they? 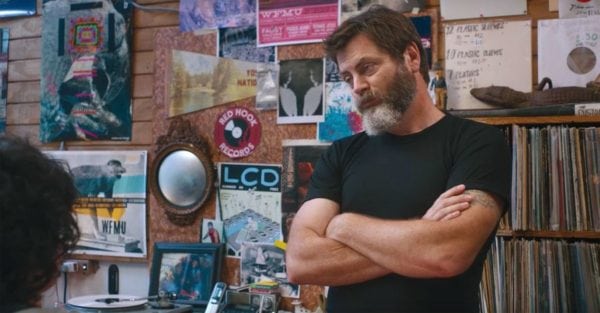 One of the film’s most endearing – sweet, even – features is its relationship with the song of the title and the way the two reflect each other. Or perhaps it’s the other way round.   The song is pleasant enough but, every time you hear it as it goes through several evolutions.  It’s only in its final version that it comes into its own, sounding complete, more mature and balanced.  The same can be said of the film.  It tries its best to avoid being sentimental, but there are times when it can’t resist being just a wee bit mawkish.  And it trades heavily on its cast, especially Nick Offerman and Kiersey Clemons, the father and daughter.

Nobody does a loveable curmudgeon quite like Offerman and he’s turned it into something of an art form.  The beard just adds to it, concealing his softer side even more than ever.  Yet we know he has a heart: he and Sam are still grieving the loss of his wife some years ago and there’s a touching moment when we see exactly how that came about.  Clemons is something of a find as his daughter, fresh, natural and often the more mature of the two: while he’s still dreaming of musical success, she’s the one who brings him down to earth and reminds him he still needs to earn money.  His best mate, Dave (Ted Danson) who runs the local bar (I kid you not!) is another man-child – an aging hippy with a smart hair cut who still loves the footloose life and more than the occasional puff of weed.

The film only really comes together towards the end, as the various threads of the story are tied up and the characters reach some kind of resolution.  Until then, it ambles along amiably, a gentle dramedy (not enough out and out laughs to be a comedy, but some definite smiles) about the father/daughter relationship.  It’s all about having dreams and is more grounded than some of the “follow your dreams” movies we get nowadays.  This is more “follow your dreams, but don’t forget you have to live as well.”  Admittedly, yet again we have a talented youngster who’s unlikely to fail, but the way she keeps her dad on the straight and narrow is refreshing and engaging.

So what was all the fuss about?  In truth, there’s nothing especially novel about Hearts Beat Loud.  It’s a film with its heart in the right place, warm, likeable, affectionate but somehow lacking that magic ingredient that would turn it into really something special.  It’s a pleasure to meet the characters, to hang out in Red Hook and listen to their music.  They don’t outstay their welcome, which is always a good thing, but it’s not the most memorable of visits.