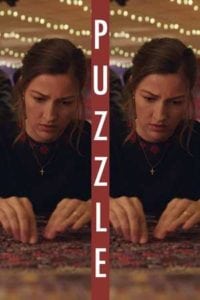 Agnes, taken for granted as a suburban mother, discovers a passion for solving jigsaw puzzles which unexpectedly draws her into a new world – where her life unfolds in ways she could never have imagined. 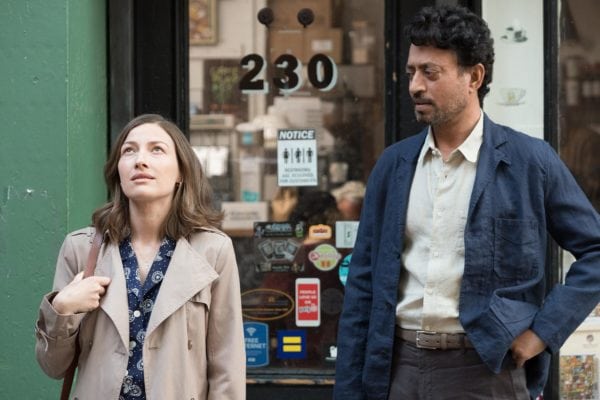 It’s plausible to assume that since Puzzle is based on Natalia Smirnoff’s Argentinian film Rompecabezas, it is a personal work and possibly somewhat autobiographical to director Marc Turtletaub (it’s also only the second film behind the camera for the well-known producer of many beloved classics). The indie drama stars Kelly Macdonald (who had a breakout debut role in Trainspotting decades ago but since then has never gotten to play a leading character) as Agnes, a middle-aged housewife that’s emotionally vulnerable and run down cleaning up the house and after her teenage children, and not much interested in her husband who now pays very little attention to her, instead treating her as a glorified maid more than anything. Agnes is also very much stuck in the past, refusing to learn how to use such simple but every day useful devices like an iPhone. Keeping in mind that the film is dedicated to the memory of Marc Turtletaub’s mother, it feels safe to say that this freeing journey to independence is crafted with heart from a similar experience.

At her own birthday party, a broken porcelain plate becomes the most fascinating object of the night (it’s certainly not the iPhone her sons have bought her), as Agnes unexpectedly finds great joy in piecing the broken parts back together.  The small act of fixer-upper sends herself down a rabbit hole of self-discovery as she journeys into a part of New York City she hasn’t gone to in ages just to purchase some puzzles, each of which fills her with satisfaction upon completing the 1000 piece bastards (far quicker than you and I could probably reach 1/4th of the way done). Also, while shopping around she notices an advertisement for a puzzle champion seeking a new partner for an upcoming tournament with a number attached to send a text to. Kids, your emergencies are of no concern, contacting puzzles champions is now the definitive reason to acclimatize one’s self to modern technology. 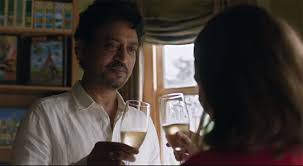 Here’s the thing about Puzzle that ultimately makes it more of a misfire from this writer’s perspective; Irrfan Khan is introduced as a magnetic presence living life without a care in the world as the typical bored rich guy living in a house so sizable that he has no idea what to do with all of the extra space. That part is fine and makes for an entertaining performance, but aside from convincing Agnes to fall in love with him (effectively having a one night stand cheating session betraying her car mechanic husband, who is not being financially truthful), he also gets to spout off a few cheesy monologues about how solving puzzles goes hand-in-hand with life. The metaphor is there and obvious; characters don’t need to overexplain the point of the movie. It’s also slightly poor writing (the film was scribed by Oren Moverman and Polly Mann) that this woman must fall in love again with another man in order to truly find herself and acquire independence along with a backbone to stop from being walked all over. Lessons can be learned from a friendship but the script leans too far into relationship territory.

There’s also the fact that the added dynamic of puzzles just isn’t very interesting to watch. A quick bit seeing the new team go over competition strategies is mildly engaging, but for the most part, we’re just watching people move a few pieces and then cutting forward to the finished project. To be fair, how do you make that entertaining? The family drama also isn’t enough to make these flaws easy to overlook, especially considering husband/father Louie (David Denman) is your typical regressive manly man that discourages his son from getting into culinary school because fixing up cars is more respectable for a guy. At times he feels more like a walking stereotype than someone with any real depth, but in a sense, the same applies for Irrfan Khan. And for as terrific an actress as Kelly Macdonald is, she’s not enough to save Puzzle even though her struggle is empathetic from beginning to end. 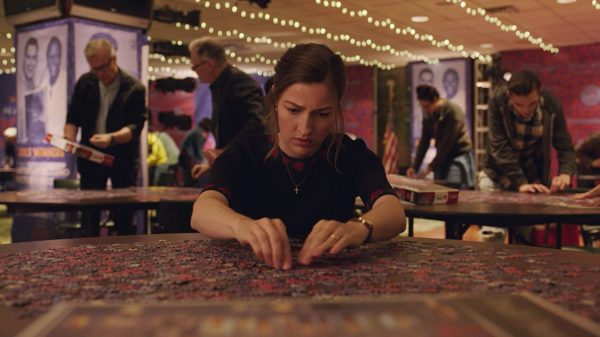 Stylistically, there are some appropriate directorial decisions such as presenting domestic life as dull containing a highly drab color palette representing the emotional suffocation Agnes is going through, while outdoor areas tend to boast visuals somewhat brighter. However, the core of the story simply falls flat and the actual puzzle solving somehow feels like a gimmick more than anything; a failed attempt to present a traditional drama in a unique light. I’d rather just go watch the same movie somewhere else and not have to watch people talk about solving puzzles as they deliver cringe-worthy philosophical speeches. It’s better that way.