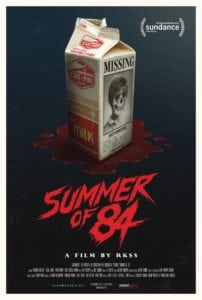 After suspecting that their police officer neighbor is a serial killer, a group of teenage friends spend their summer spying on him and gathering evidence, but as they get closer to discovering the truth, things get dangerous.

With Summer of 84, filmmaking collective RKSS (Turbo Kid) peek behind suburbia’s white picket fences and fake cul-de-sac smiles in hopes of finding something wicked. “Even serial killers live next door to someone.” It’s Stranger Things meets Gacy. An ode to lazy small-town summers and creative odysseys of the restless adolescent mind. RKSS venture into ever-popular nostalgia territories amidst familiarity and darkness, telling a kiddie-snatching tale intended at the least to manipulate “home before dark” innocence. It’s relatively predictable and scant on mystery, but when not obsessing over masturbation or boobz, Summer of 84 is a nasty true-crime thriller that could occur in anyone’s backyard. “Thou shalt love thy neighbour as thyself” don’t mean a thing.

Davey Armstrong (Graham Verchere) is your average 12-to-16-year-old boy obsessed with late-night conspiracies. His latest “inclination” suggests that local cop Wayne Mackey (Rich Sommer) is actually the Cape May Killer – a monster who preys on helpless boys in Davey’s age demographic. His crew – “Eats” (Judah Lewis), “Woody” (Caleb Emery) and Curtis (Cory Gruter-Andrew) – are skeptical at first, but begin to agree after joining Davey throughout his investigation. Could the upstanding gentleman who hands popsicles out to underage kiddos while he watches them play sports from a lawn chair in his front yard actually be a murderous maniac? Davey’s going to find out, whether he’s grounded or not.

Creators François Simard, Anouk Whissell, and Yoann-Karl Whissell evoke my Jersey-bubble childhood within the boundaries of Ipswich, Oregon. It’s the life many of us lived. No one wants to believe their middle-America town could fall victim to unspeakable dangers, and as children, we ruled the streets and yards like they were our personal playground. All-black manhunt games, unspoken codes between homeowners, “it can never happen here” pacification. RKSS return to the All-American dream and morph it into a red, white and blue nightmare. Both a commentary on how drastically times have changed (no cell phones, adolescent freedoms) and the unassuming scaliness of demons hiding in plain sight.

Enter Summer of 84’s growing cast, who sneak mischievously and play junior detectives with vivid imaginations. Banter is typical of pre-teen stereotypes – pornography commentaries, mom jokes, words like “jizz” or “spank” utter over and over – while each child carves their niche. Davey the “heroic leader” who steps into unlocked houses first, “Eats” the leather-jacket rebel suppressing conflict, Woody the nervous but loyal brickhouse, Curtis the non-believer. Dialogue feels a little lesser than Stranger Things given how the boys will always devolve into explicit obscenities when in doubt, but evidence collections against Mackey bring out their best chemistry. When on the case, characters scamper and shout walkie-talkie commands with amble shakiness – balance just isn’t always in place.

This brings us to babysitter-turned-love-interest Nikki (Tiera Skovbye), who – inexplicably – walks over to Davey’s house one day and fulfills his wettest fantasies. This is after she catches him peeping through window blinds to snag a glimpse of her topless. There’s zero explanation for romantic intent, as she begins luring Davey out to reminisce about goofy pictures they might have taken together (still with an age gap). Davey’s wildest dreams are coming true, but, we must beg “why.” It’s such an odd, unannounced arc that never finds place or meaning in Summer of 84. Written almost like self-fulfillment; shoe-horned because a movie needs “sexual tension,” right?

During cat-and-mouse scampering, Rich Sommer as Wayne Mackey leads audiences on just as much as unconvinced Davey. We want to believe Davey, except Wayne is the adult in the situation. He’s in control, but also sympathetic to Davey’s fears. A killer has been snatching children and Davey is trying to rationalize a way of ending such atrocities. Clues can either be damning or coincidental, which Summer of 84 plays close to vest. Sommer is the reason for every ounce of tension – a pillar of community who understands advantage, steps cautiously and is too goddamn nice for comfort. If, you know, he even IS the killer. 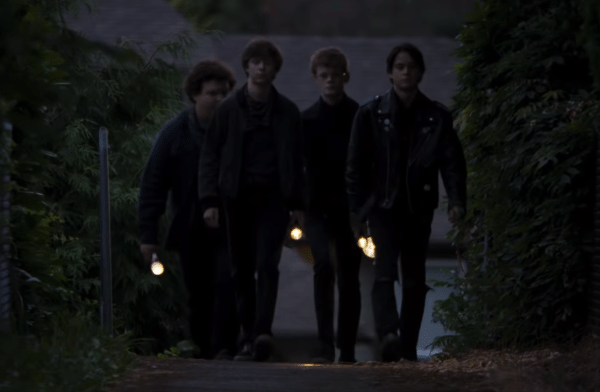 RKSS returns with an ode to childhood that’s a little more streamlined than Turbo Kid, and a little less creatively ambitious as well. Summer of 84 decks the halls with 80s pop-culture, endangers the helpless, but isn’t sneakily inclined to shock viewers once credits have rolled. Malicious, sick and specific to a bygone era? Absolutely. It’s just sometimes better as a time capsule than serial killer hunt when it comes to open-ended thriller chills. A very “fine” film that’ll kill any time you may have laying around – which, coming from the RKSS camp, leaves us wanting a bit more.