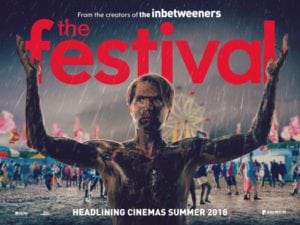 After Nick’s girlfriend dumps him, his best mate Shane has the perfect antidote to his break-up blues: three days at an epic music festival. 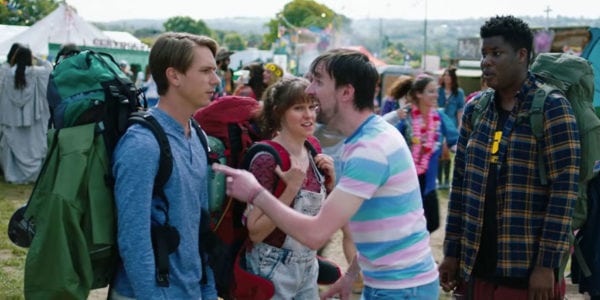 The Inbetweeners creator Iain Morris reunites with star Joe Thomas for this utterly unambitious yet breezily entertaining gross-out comedy, which should effortlessly please fans of Morris and Thomas’ prior collaborations.

Filmed on location at last year’s Bestival – though the festival’s name is oddly never dropped during the film – The Festival sees awkward sad-sack Nick (Thomas) heading to the unnamed fest with his pal Shane (Animashaun) in the hope of shaking his post-breakup blues. Of course, his recently-decoupled ex, Caitlin (Thomas’ real-life fiancée Hannah Tointon), is also there with her own gang of try-hard posho types, and all manner of chaos ensues.

Much like both of the Inbetweeners movies, this film’s strengths lie not in its by-the-numbers plotting or fairly predictable array of nauseating scenarios, but rather the charm offensive of its cast, its situational authenticity (to a point), and the gonzo enthusiasm of said stomach-churning gags.

Though the 34-year-old Thomas is getting a little long in the tooth to convincingly play a 21-year-old Uni graduate these days, it’s easy enough to forget once the setting shifts to the festival and the pacing picks up. Thomas may essentially just be channelling his Inbetweeners character here, but his achingly middle-class exasperation is consistently amusing, to say nothing of his willingness to routinely place himself in humiliating situations for our entertainment. 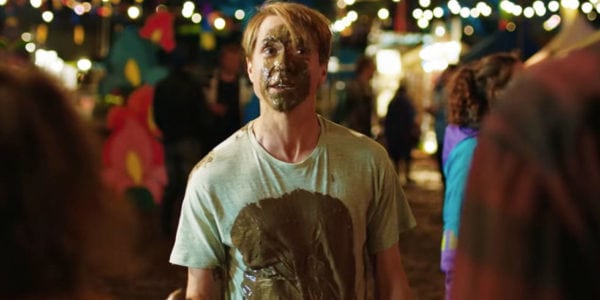 Elsewhere, the largely unknown Hammed Animashaun is a fun comrade, acting primarily as the voice of reason while cruising relaxedly through the weekend’s glut of increasingly cartoonish calamities. Claudia O’Doherty, best known for her terrific work on Netflix’s Love, neatly rounds out the central trio, though some may find her motor-mouth act a tad grating and they couldn’t be blamed for that.

There’s also plenty of added value in some small but memorable supporting roles; Jemaine Clement is an easy hoot as Shane’s overly emotional new stepdad, and Noel Fielding shows up later in a part tailor-made for his talents, albeit with an hilarious surprise attached.

Ultimately, however, what makes The Festival ever-so-slightly more than a garden variety sex comedy with a unique-ish setting is how accurately it recreates the music festival vibe and atmosphere.

From the boisterous dickheads to the awful porto-loos, abundance of mind-altering substances on offer and, eventually, the music, this film is clearly written by people with a love for – and undeniable exasperation of – going to music festivals. For those just returning from or heading to fests during mid-August, the release date couldn’t be more shrewd. 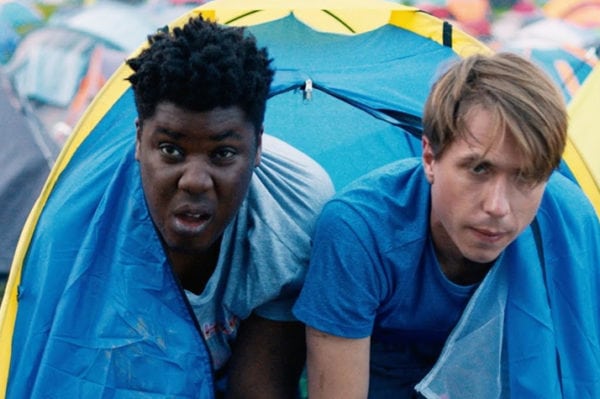 It naturally won’t sing quite so loudly with those who cringe at the mere thought of sleeping in a muddy field for three nights and pooing in a plastic hole in the floor, but the gags generally play broadly enough that the setting shouldn’t deter the non-believers much at all.

The character work may be routine, but the movie admirably doesn’t pad itself out with lazy, generic soap opera nonsense, nor does it try to force an overly sentimental gear-shift late in the day. It follows the through-line of The Inbetweeners‘ brand of cheeky bromantic bants to a tee, with a few divertingly bizarre detours along the way. An hysterically surreal third-act dream sequence that comes totally out of nowhere, in fact, might honestly be worth the price of admission alone.

It doesn’t train its sights high, but The Festival is nevertheless an amiable Brit comedy that balances its crude gags with an off-kilter weirdness and some spot-on observations of the music festival experience.