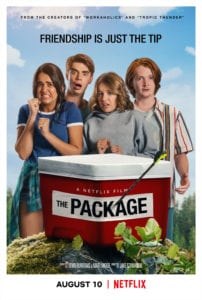 When a group of teenage friends go on a spring break camping trip, an unfortunate accident sets off a race against time to save their friend’s most prized possession. 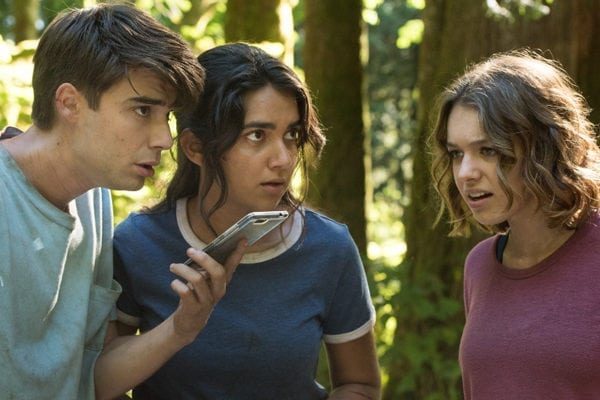 Though Netflix’s Originals line-up is often (correctly) derided for serving as a dumping ground for uninspired genre fare a conventional studio wouldn’t touch, The Package deserves at least some credit for being decidedly more demented than your typical R-rated teen comedy.

If you haven’t seen the trailer for The Package before watching the film – as I hadn’t – the central premise might prove a little surprising; five teenagers head into the wilderness for a spring break adventure, only for one of the gang (Eduardo Franco), to drunkenly slice his penis off while taking a whizz. Hi-jinks ensue as the kids desperately try to track down the severed appendage and reunite it with their hospitalised pal.

Much like previous Workaholics-produced Netflix comedy Game Over, Man!, the tone is all over the place here right from the jump. The instigating dick-cutting incident comes wildly out of nowhere if you’re not expecting it, setting a self-consciously edgy vibe for the remaining hour-plus, with occasional, unsuccessful divergences into Serious Drama territory. 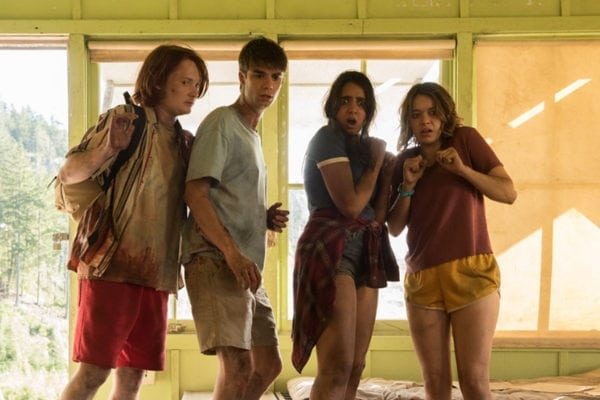 At times reminiscent of teen classic Superbad – for starters, a character presents an unconvincing fake ID just three minutes into the film – The Package sadly lacks the warm, gooey centre or endearing characters to successfully meld its gross and mean gags with the more “heartfelt” character work.

Too much of the movie is a mediocre melange of hit-and-miss one-liners and forced pop-culture references which desperately want to appeal to both newer millennials and their parents, to say nothing of some predictable gross-out gags (the age-old “suck the venom” joke is rehashed here once again).

What makes the movie work at all, then, is its cast. Geraldine Viswanathan came to the attention of many earlier this year with her charming performance in sex comedy Blockers, and she’s once again an extremely appealing presence opposite Daniel Doheny, a likeable young actor who starred in the recent gay Netflix rom-com Alex Strangelove.

A few bit-parts add some neat value, also; criminally underrated character actor Michael Eklund has a small but amusing role as an army veteran-turned-shopkeeper, Mary Holland is good fun as an exasperated triage nurse, and Blake Anderson himself appears briefly in the barmy role of, well, you’ll see. 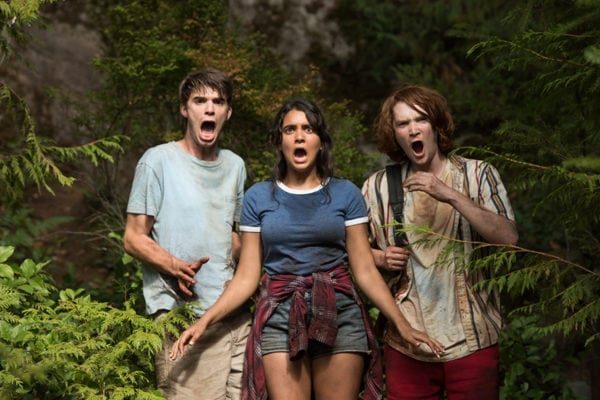 Meanwhile, whoever the production enlisted to sculpt the fake penis at the centre of the madcap scenario deserves major credit; it’s impressively detailed and gets almost as much screen time as our stars, even if the novelty factor of seeing the poor dick put through the wringer runs out long before the movie’s 95 minutes are up.

This is a movie just ridiculous enough you could just barely believe it was based (loosely) on a true story, but sadly, no dice. It’s a mildly entertaining effort that, like most adult-skewing Netflix comedies, lacks the courage of its convictions to fully push the envelope. Instead, it circles back around to tedious will-they-won’t-they romantic cliches in the vain hope of injecting some needless humanity into a movie about a guy having his schlong sliced off.

The sentimental slush doesn’t gel at all with the movie’s generally crude tenor, causing it to over-extend itself somewhat in the final stretch, outstaying its welcome by about 10 minutes. Still, it’s a generally well-produced movie with surprisingly solid cinematography that (mostly) moves fast, which might be sufficient for those looking for something dumb to watch after a hard day at the office.

If you’re looking for a streaming comedy that truly defines the “original” in Netflix Original, however, this isn’t quite it. Though well-cast and watchable enough, The Package doesn’t try quite hard enough to make the most of its grimly absurd premise.