AJ Styles and Samoa Joe always promise greatness when they step between the ropes together, and they didn’t disappoint at SummerSlam. The two men worked the match at an expert pace, working a slow start before building into a nice crescendo of their greatest hits.  Joe dominating a lot of proceedings, and his incredible athleticism is still not letting up despite his age. Styles is probably the most consistent performer in the company right now, and he put on arguably his best performance since his match with Brock Lesnar at Survivor Series last year.

The match was really on its way to being a classic when Joe decided to give a shout-out to AJ’s wife, leading to AJ losing it and taking out Joe with a chair. The two men left fans wanting more, and it felt like they still had a lot left to offer. Some fans might complain about the decision to end the match with a DQ, but for once, it actually feels like it adds something to a feud. I’ve not been a huge fan of the ‘Wendy Styles stuff’, but they utilised it well here, and things are looking very promising going forward.

The finish also sets up a potentially mouthwatering hell in a cell match for next month. These two men have always been dynamite together, so adding one of the company’s most iconic match gimmicks to the mix means that we could see them put on one of their best matches yet. Heading into the event, most fans knew this was going to be one of the night’s best matches and it didn’t disappoint. Bryan is one of the best in the business and The Miz looked great against him here. The two told an excellent story in the ring, and Bryan really added to that by selling his leg injury like a pro.

It must be said though, I’m not sure I brought into the supposed hatred that exists between the two men. Perhaps the feud needed a bit of a stronger build on SmackDown, instead of being overly reliant on video packages, as enjoyable as they were.  This match was supposed to have brewing for the last eight years, and in all honesty, I never really felt that in the ring.

The match had some really exciting moments though, and the near-falls were really nicely executed, especially when The Miz hit the skull crushing finale. The decision to have The Miz pick up the victory is the right one, the company can hold off for a rematch at a bigger event and give Bryan his big victory then. Well, this was a pleasant surprise. Having Balor come out as the demon was pretty sweet, and having him squash Corbin helps give him some momentum back.

In short, Balor looked awesome, Corbin got squashed, it was over quickly, and everyone was happy. While this was one of the night’s most predictable outings, Shinsuke Nakamura and Jeff Hardy put on a solid match in the time that they were given. The two men had plenty of fun mocking each other at the start and they kept a clearly tired crowd invested for the most part.

Hardy nearly killed himself with a Swanton bomb onto the apron in the craziest spot of the match, and as great as it looked, Hardy probably shouldn’t be pulling stuff like that these days. Nakamura picked up the victory following that with the Kinshasa. Orton then made his way to the ring only to walk away before he actually got in.  The whole thing was short and sweet and did exactly what it needed to. The whole idea of this match was to make Rousey look strong, and it succeeded. Rousey dominated the match from the opening bell to the last and mocked Bliss on several occasions. The ending saw Rousey force Bliss to tap to the armbar, and my only gripe is that it would have been pretty awesome to see Bliss pull her infamous arm spot after the match to sell the injury. Sure, Bliss looked weak here, but she is a strong enough character to recover from it fairly quickly.

The post-match nonsense with The Bellas felt kinda forced, and clearly existed to set up the rumoured match between Nikki and Ronda later down the line. 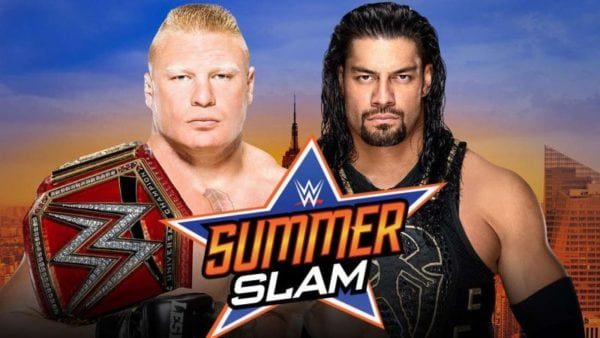 This one will no doubt prove divisive among fans. Me, personally though-  I loved it. Having Braun at ringside was a really novel twist on the Money in the Bank cash-in, and the in-ring action was suitably quick and hard-hitting.

Seeing Brock go crazy on Braun was one of the highlights of the night, and even though the finish was a bit flat, having Reigns win was the right decision. Don’t think we’ve seen the last of Brock though. With the WWE signing their new deal with Fox, there is no way Lesnar isn’t sticking around for that kind of money. He will likely disappear for a few months, but he will definitely back for Mania season.

This was edge of your seat stuff and it was really well executed. Lesnar’s reign has not been without its problems, but this was a thrilling way to bring it to an end.

Verdict: On the whole, this was one of the best PPVs of 2018. The majority of the big matches lived up to their promise, and while there was a bit of fat that could have been trimmed from the show, this was a really enjoyable way to spend six hours.