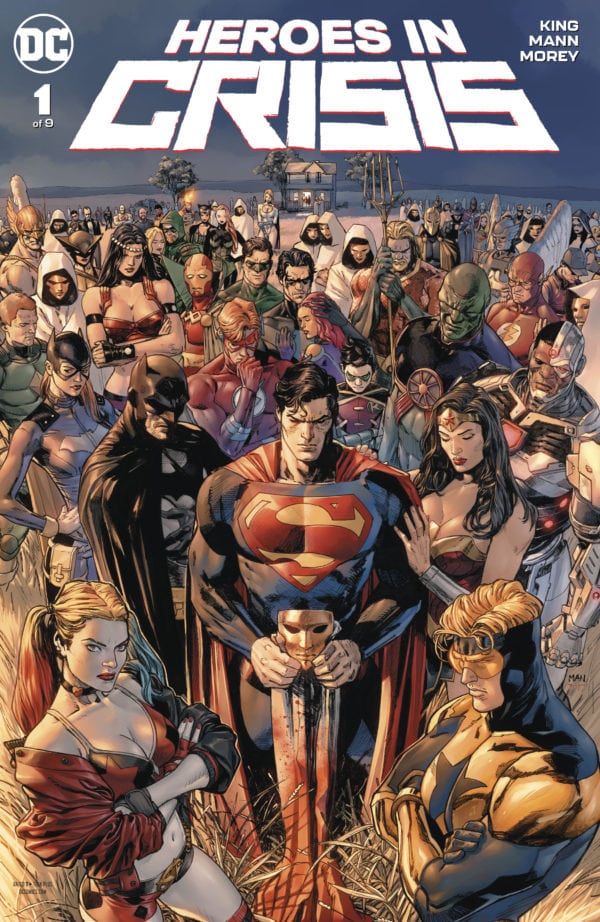 Superheroes go through a lot in their stories, whether its saving the world, facing off against a deadly enemy or mourning the death of a friend or partner. The idea behind DC’s Sanctuary is a place for superheroes to go and work through their trauma, helping them through it so they can be better heroes or put their lives back together. In Heroes in Crisis #1, Tom King introduces this place to readers, but doesn’t fully explore it before tearing it apart after a mass murder which claims the lives of dozens of superheroes with the murderer still out there. It’s an interesting premise, but unfortunately doesn’t live up to its potential in the first issue because of the story’s perspective and fast pace.

Rather than taking the time to learn about day-to-day life at the Sanctuary, King instead drops readers in media res after the massacre has already happened with Superman investigating and confirming the deaths. Though it is a heavy topic and Superman’s despair is quite clear, there isn’t much emotion involved because everything feels so rushed. Even the beginning fight between Booster Gold and Harley Quinn lacks a certain amount of interest as we have no idea why they’re fighting until closer to the end of the issue. King does employ his usual time jumps, using talking head videos of some heroes at the Santcuary to go a little bit into why they’re there or highlight the tragedy of their death, but King relies a bit too much on the mystery aspect with the amount of questions into the killings  instead of building the story up from a point of emotional interest and engagement.

Some of the deaths that are presented hit hard, particularly one which is sure to rile fans up a lot, but for the most part it seems more like its shock value for value’s sake. Again, because we didn’t learn what life at the Sanctuary was like or the progress certain heroes made in their treatment, there isn’t a whole lot of investment into their deaths beyond simply name recognition. At this point, it feels a bit cheap to jump to the end of the massacre rather than take the time to explore the Sanctuary, but that at least is part of the story’s purpose. King’s intention is to place readers in the same shoes as Superman, Batman and Wonder Woman as they take it all in and look over the bodies, feeling the same sense of loss, confusion and grief they feel. It doesn’t work quite as well as King hoped it would, but part of his intention still comes across.

Clay Mann is mostly the reason for that success. His artwork makes the pain on Superman’s face quite clear as he surveys the bodies. Mann’s body language in how the big three hold themselves throughout the issue is nicely done as he gives each hero a different physical response. Aside from Superman’s sadness, Mann’s depiction of Batman particularly stands out as he shows the anger slowly building inside of him that is just asking to be released. Tomeu Morey’s colours compliment Mann’s work, giving the issue a vibrant look when it is outdoors and a more subdued look when the heroes are overlooking the bodies inside or Harley and Booster take a break from fighting to quickly sit in their grief. The art is certainly the highlight of the issue.

Though it has an intriguing premise, Heroes in Crisis #1 lacks the emotion King strives for by placing the beginning in the aftermath of the massacre. The emotion doesn’t feel fully earned yet, even when the art clearly expresses Superman’s pain at seeing so many heroes dead. Hopefully the series picks up and heightens the emotional factor as it goes on, but for now this was a rather lacklustre opening to a potentially great idea.