A true believer in soul, spirit, and a higher power, filmmaker, actor, composer, philosopher, teacher, and physicist Douglas Burke has gifted the world with his labor of love, the coming of age faith-based surf movie Surfer: Teen Confronts Fear, a one in a lifetime motion picture so unique that it cannot be categorized like a traditional movie. Compared to Tommy Wiseau’s cult favorite The Room, Surfer has been sweeping across the United States in select theatrical screenings where Burke has made an effort to attend each event for candid Q & A sessions to meet the film’s fans. Thriving on the good will and curiosity of the film’s patrons, Burke has extended not just his art, but his hand and his heart to address the questions of anyone and everyone who has ventured out to experience his incredible and vastly unique work of art. The film stars his son Sage as the “Surfer” of the title, and the movie follows the boy’s journey through fear, faith, and self-discovery as he confronts his fear of surfing. In this exclusive interview, Burke discusses how he’s handling the criticisms of the film, but also how he’s enjoying the very hands-on process of exhibiting the movie around the country and meeting those who come out to watch it. 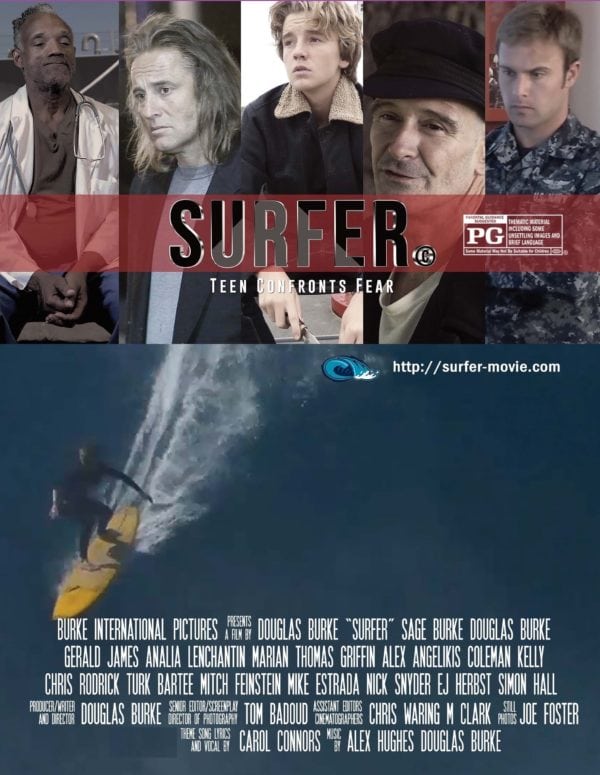 Surfer is an incredibly special film, unlike any in the current marketplace. I’d venture to say that there’s literally no other movie like it, period. Tell me, Doug: What is the genesis of this movie. How long had this movie been percolating in your conscious and subconscious before you actually starting shooting footage?

Surfer was originally just a sequence of surf videos of my son surfing from age 5 to 14. Along the way of filming him through those years I envisioned a silent film that just showed the struggle of the young boy as he fought against the power of the ocean.

Doug, our readers may not know anything about you personally. Tell me about yourself and give me a bit of a backstory, leading into filming Surfer.

I am a physicist who also held an interest in acting and filmmaking. Hard to do that when you work full time as a professor. Lecturing gave me a chance to act in front of an audience. That is great. However you can’t make films when you do that so filmmaking became a hobby. Also the study of memory led me into trying to understand the physics of the psyche and this has been a life long passion. I am grateful for having had the opportunity to study the Strasberg method of acting, as that has been a great inspiration for me.

Talk a little bit about your faith and how that shaped the process of formulating and making this movie.

I have a belief and faith in God. In life when you need help you get it through your spirit which is connected to God. God is everyone’s Father and when you need a Father he is your guy.

The faith-based marketplace is having an interesting period where they’ve become quite marketable to a wider demographic. Have you been watching any faith-based movies lately, and how would Surfer fit in with some of those? Who do you think Surfer is for? Who is this film’s audience?

I didn’t see the movie as a faith-based movie when I was making it. I experienced the character I was playing as having a deep and profound faith. I don’t understand why a general audience wouldn’t be interested in faith. Most people who I talk to who have no faith will admit that they wish they could believe in God. Some people who have faith will lose it at some point in their life and they wish that it would come back. So no matter where you are with respect to whether you believe in God or not the movie has something for you. As Rabbi Chaim said when he wrote his review “…. recommended for both believer and non-believer”

Surfing is a major theme of this movie, obviously. Tell me about your passion for surfing and how that affected the telling of the story of this film.

I love surfing because no matter what level you are at surfing you can always get the opportunity to grow and learn about how your spirit interacts with your body every time you go surfing. When my knee is really swollen, as it often is nowadays from a torn meniscus, and I can barely walk on it, if I go surfing and struggle through the pain it I always feel better and expanded afterwards. 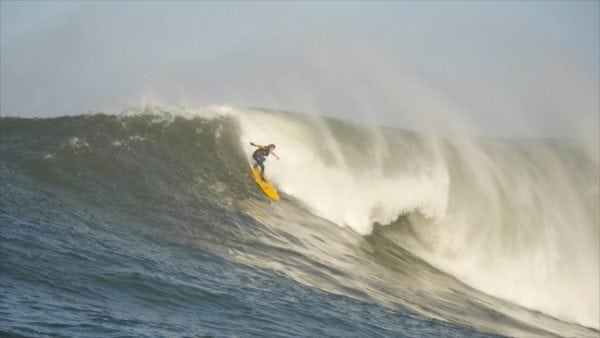 Your son Sage plays the lead for this film. Talk about Sage’s interest in surfing and how you were able to coach and direct him through this movie.

The method of turning fear into courage that I teach him in the movie is something that I taught him over a period of many years while making the movie. My coaching and directing was aimed at processing his fears whether those were fear of big waves or just fear in general. His interest in surfing was there ever since he was about two and a half when I first pushed him into a wave and he felt the thrill of it.

The movie tells its story in a very fascinating and nontraditional way. At what point in your life did you think to yourself that you wanted to be a filmmaker? Did you study at a film school? Surfer looks like it might have been filmed over a period of years.

I always was interested in how our psychospiritual-self interacted with our body. This led to an interest in physics and an interest in acting. This led me to study the Method as defined by Strasberg, which to me was a very magical exercise in investigating the mysteries of memory. Everyone should study the Strasberg method and discover the magic and mystery of memory. This is fascinating for all human beings whether they want to be an actor or not. All these things were always very exciting to me from an early age. I did not study to be a filmmaker but the desire to self-express as an actor drove me to want to make films. So the method of telling the story is driven by my needs as an actor.

Talk about the challenges of self-distributing the movie. Did you try to get an outside distributor to take a look at it, or did you just jump right in and do this all by yourself?

It is a difficult task filled with rejection and sorrow but the pain from that is a glorious fuel. I just jumped right in and started by myself. It is so fun to find small independent theaters all across America that have the freedom to play whatever movie they want because they are not controlled by anybody. They are the last great example of a free press.

Critics are wildly divided by this movie. Some are calling it the new The Room. Have you seen The Room? What are your feelings about being called the next “so bad, it’s great” movie? Do you think this might help bring an audience to your movie?

I love the critics and everything they say whether it is good or bad or so bad it is good. I applaud their freedom of speech in saying whatever they say. I hope that all the things people say will bring the audience. The movie going public in America is filled with very smart people. They know what they see when they see it. They also know that there must be something very unique about the movie Surfer or people would not be talking about it with perspectives that are so diverse.

I have not watched the entire movie The Room but from what I gather the main character in real life is like an interesting Don Quixote type of a personality whereas in Surfer my character when appearing as a ghost has some of the qualities of a Don Quixote. In real life I am not Don Quixote I am a teacher of Physics and Engineering. Still, Surfer is so different than anything people have seen that they get very uncomfortable when they can’t put a label on it so they look for anything they can to put a stamp on it. In truth when a movie is difficult to categorize it can be compared to many things. I think people like The Room because it is very different. In that regard Surfer also is very different from mainstream. “There must be things that are amazing about The Room since Wiseau was compared to Tennessee Williams by the New York Post. Williams was one of the best American Playwrights of all time. Therefore there is obviously something magical about THE ROOM. I do know that the fans of the room are very cool and happy people as I have watched some Q&A’s online after screenings of The Room. The fans are so filled of enthusiasm and joy and seem to bring such great energy into the theater. I would be happy and flattered if they embraced Surfer and I look forward to seeing them at the future screenings.

I don’t care about the negative reviews about me and they are not worthy of a response. However, when you attack the other actors in the movie I feel a need to stand up and respond to teach the other actors about this part of life. They need to know that as a member of the cast of a Burke International Picture, I am going to stand up and fight for them and protect them. Further any actors I may hire in the future need to know that if I hire them it is because they are a great actor and I will protect them against the kind of injustice that was attempted on the actors of Surfer in some of the reviews. So here is how I would want the actors to process the negative review. Keep in mind everything I say about the negative critics can be proven to be true.