Cult filmmaker Robert McGinley might be best known for his subversive low-fi apocalyptic skater punk film Shredder Orpheus (1989), which has enjoyed a devoted following in the ensuing decades. His decidedly unique take on a futuristic cyberpunk outlook continued with his following film Jimmy Zip (1999), and now with the neo-rock themed Danger Diva, which might well be construed as a big sister film to Shredder Orpheus. McGinley’s influences range from Phillip K. Dick to William Gibson, and fans of bleak, intriguing, and challenging futuristic, cinematic nihilism with a touch of the melodious will find his work to be a dark dream come true. In this exclusive interview, McGinley discusses at length his latest Danger Diva, which will be theatrically released soon, followed by a streaming and home video release later this year. 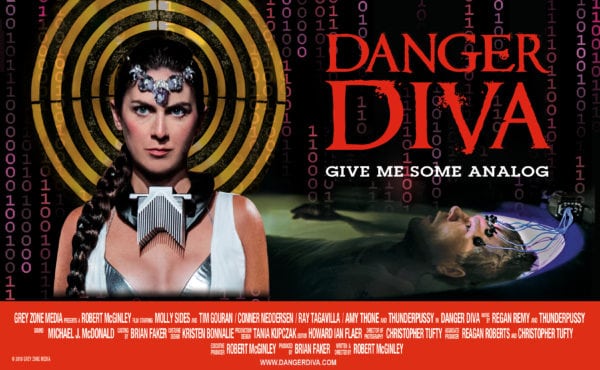 Danger Diva is your first movie in many years. You’ve been missed! How long was this film been percolating in your mind before you set out to finally make it?

The percolation started in 1993 after Shredder Orpheus had circulated and I wrote the first draft of Danger Diva. I shopped the screenplay for several years with out success. Out of frustration I wrote Jimmy Zip very quickly in 1996 and found a clear path to making it. After that, life circumstances kept me on the sidelines for many years but I stayed busy making short music video poems and landscape photography. Once or twice a year I would pull Danger Diva out of the drawer and play with the story and characters but didn’t have the energy to get it started until now.

Molly Sides is quite a find. Where did you hear about her? Were you familiar with her band Thunderpussy? What made you decide to go with her, and how did she respond to the idea of starring in a film at first?

Finding Molly Sides was a huge stroke of luck and the catalyst to make the film. When I realized that I wanted to develop Danger Diva in Seattle the first order of business was to find my diva. Subsequently, I had lunch with some of my theater colleagues and asked them, “Who in Seattle is the musical Le Femme Nikita?” In unison they said, “Thunderpussy: Molly Sides.” At the time, I had never heard of the band but knew that Molly was a highly regarded dancer and choreographer with zero acting experience on or off camera.

After seeing a few band videos I sent Molly the script, called her up and she was pretty enthusiastic from the get go. When she came in to read for Devi she was raw but very game to play the role and excited about the possible inclusion of the band both musically and as performers. I thought with adequate prep and enough experienced actors around her she would be fine. Thankfully, she exceeded my expectations and when you consider many famous pop singer/dancers struggle as actors in big movies it was gratifying to see her nail scenes one after the other. Her confidence grew everyday of the shoot and by the last week she was hitting emotional notes that only the most experienced actors are able to access. She deserves all the accolades she has received along with Tim Gouran (Stanley Arkoff , Devi’s nemesis) and the rest of the cast.

If anyone has seen your previous films Shredder Orpheus and Jimmy Zip, there’s a recurring theme of the art form transcending the characters into higher beings. Can you talk a little bit about this theme and where you might get some of your inspirations?

Characters that become higher beings are often a function of Aristotelian story structure personified in rites of passage stories. Orpheus, Jimmy Zip and Devi Danger all embark onto the hero’s journey triggered by misfortune that requires them to heed “the call to adventure”. The characters aspire to a higher calling that transforms them, those around them, and provide a boon to their community. Since these characters are artists they have access to a spiritual realm that conventional warrior/ heroes don’t possess, ultimately leading them to a higher plane of existence. Furthermore, I believe that the artist/protagonist’s journey has the ability to generate catharsis that is fresh and unpredictable. 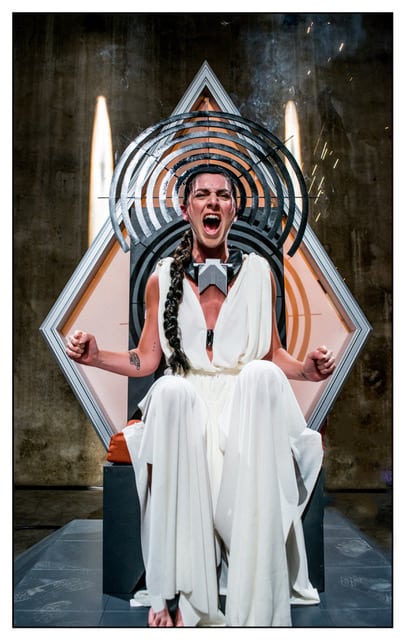 Danger Diva has some strong cyber punk influences. Talk a little bit about your love of the cyber punk genre and how you were able to craft a convincing world in this genre on a limited budget.

I am a student of Neuromancer, William Gibson’s novel, and Ronald Reagan’s Star Wars program run by DARPA. In the eighties and nineties I found Cyberpunk concepts of chip implants and nervous system augmentation very compelling. In those days the concept of chip implants was a fanciful idea where now it’s become more prolific and mainstream.

Creating a convincing world of the story was a function of having great Director of Photography, Chris Tufty, and dedicated collaborators in Production Designer, Tania Kupzak; Art Director, Regan Mac Stravic and Prop Designer, Sarah Spiegelberg. Collectively, this crew went the extra mile to breathe life into a near future world.

One example of their work occurred in pre production when the art team discovered a barrel of computer chips by accident stored in a scrap yard building next store to our warehouse location. The film gods smiled and we utilized this treasure trove to outfit our Brain Cattle.

Were new songs written for this film, or did you incorporate Thunderpussy songs? Talk about your collaboration with Molly and the band for this film.

The songs in Danger Diva by Thunderpussy and composer Regan Remy (and myself) were written specifically for the movie. Molly and Thunderpussy guitarist Whitney Petty got really invested in the film and agreed to contribute 2-3 songs. The most crucial song that opens the film, “Takin’ You Over”, was written in reaction to song lyrics I wrote and submitted to Molly and Whitney which dealt with corporate surveillance and the co-option of human consciousness. They used those words as a point of departure and wrote the song that plays in the film.

When Regan and I began writing songs including “All That Is”, “There’s Not A Lot of Time” and “It’s Later Than You Think” we got Molly in the studio and she just dove into the songs full throttle. It really was a magical process because Molly is so emotionally honest in her vocal performances.

In sense, I feel like Shredder Orpheus and Danger Diva could be set in the same world. What do you think of that?

You are absolutely correct. The first draft of Danger Diva was written just a few years after Shredder Orpheus came out and I think of the films as kindred spirits. Both films are set in the same world and that was why I wanted to shoot the film in Seattle.

You were the star of your own film Shredder Orpheus. Have you thought about returning to acting? Was there ever a point where you imagined yourself in a role in Danger Diva?

After Shredder Orpheus I did try my luck at acting in L.A. and realized that that I didn’t respond well to stupid direction or directors. I was always thinking how I would direct a scene instead of trying to interpret a fledging director’s vision. I just didn’t have the patience to take the crap that is a crucial part of the job. However, I’ll act if I need to and being an “Actors director” is very helpful when you have been in an “actor’s shoes”.

Out of a necessity I did have a tiny role in Danger Diva as the Sound Mixer in the opening “rock riot” sequence where I am swearing/screaming at the crowd and the destruction of the PA. I must admit that this venting was not really acting per se; maybe situational type casting! 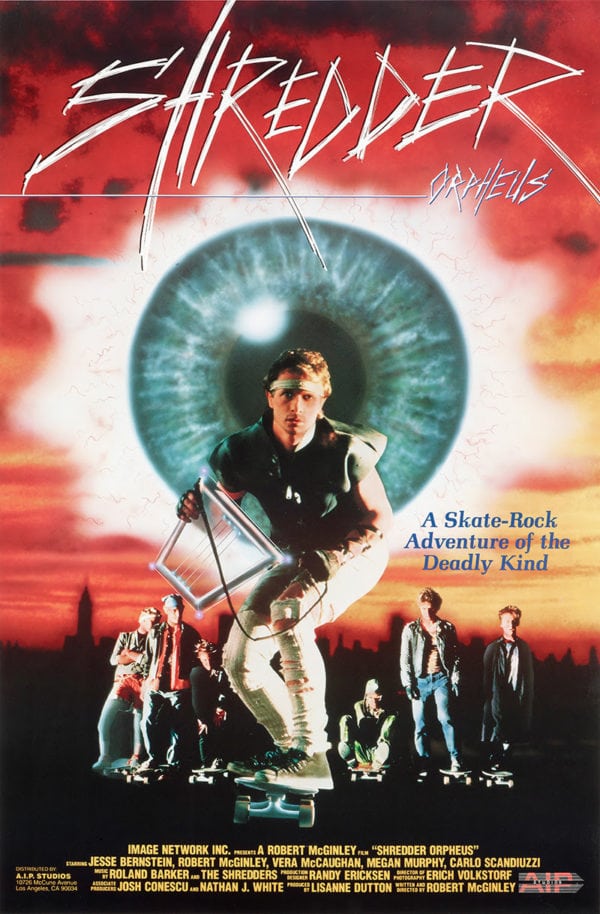 Danger Diva might even be considered a film about a superhero. Superheroes are all the rage right now. What are your thoughts on the superhero genre, and the notion that this film could fit into that category?

I think of Devi as more of an artist than straight up super hero. However, with the early drafts of Danger Diva I looked at the character of Patty Danger as a crime fighter with a voice that becomes a weapon. Several drafts later she wanted to be called Devi and her arc moving from rocker to new music diva to being a mother of a child seemed a natural fit. Obviously, Devi has a supernatural voice that “Can change the world” and may someday lend itself to other heroic feats that serve humanity.

I feel like this movie could have a sequel. Everything is sequalized these days, so perhaps it’s best if this is a one-and-done endeavor, but what are your thoughts on continuing the story?

In the ensuing story, Baby Wiiliam, Devi’s son, is a rebel guitar slinging rocker mentored by his digital father, Stanley II, falls in love with a cyborg named Chamomile and confronts the techno–oppression legacy of his father.

What are the plans for the film’s release?

Danger Diva should be ready for DVD release with a soundtrack LP in late October 2018. VOD release will follow in November.

Who would you say is the audience for Danger Diva?

Or as Devi says, “Anybody (that) still want(s) to be human.”

Anything else you’d like to say about this film?

At the risk of sounding preachy the last thing I’ll say is Danger Diva includes a warning that human consciousness and perception are precious attributes that corporations (and governments) are interested in manipulating. Collective recognition of that is essential to creating a sustainable way of life for generations to come. Now more than ever: Question Authority!