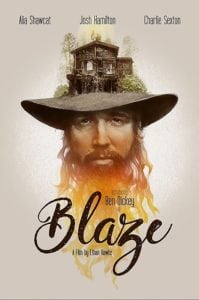 The life of musician Blaze Foley. 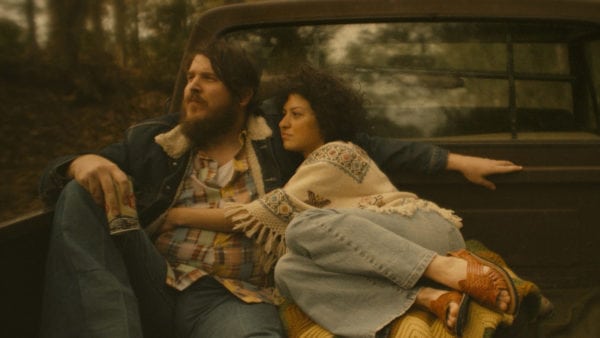 Unless you’re deep in the heart of the country music scene, it’s not a stretch to suggest that the subject of Ethan Hawke’s new biopic Blaze Foley is an unknown. Despite being an influential singer and songwriter, Blaze never actually achieved superstardom but still became a legend, and it’s the first of many reasons that this look at a very complex man (often suffering for his art while internally battling a number of other demons) actually serves as a refreshing change of pace as far as character studies of real-life personas go. What’s depicted is not a musician or celebrity that took the zeitgeist and held it in the palm of his hand, but rather someone that desperately tried to make it only to wind up failing. That sentiment isn’t exclusive to Blaze’s musical career either, as he was something of a letdown in many other aspects of his life.

Born in a tree house located in the backwoods of Georgia, gone too soon tragically murdered inside a friend’s home, and stirring the Texas Outlaw Movement that would go on to encourage the likes of some of the most revered and respected names in the genre such as Willie Nelson, Ethan Hawke wisely constructs the biopic as jumping between three different time periods that, at a post-film Q&A, he referred to as past, present, and future. This allows for a non-chronological but still very linear experience that stomps out some of the dryness and boredom that can typically be found in the standard biopic.

There is also the added dynamic of Blaze Foley performing two hours worth of music inside of a bar where each, beautifully poetic and soothing tune (as someone that doesn’t really care for country music, I have to admit I was taken aback at how enjoyable consuming the songs was, especially considering how deeply personal and emotionally raw the lyrics were to Blaze’s life) is used as a method to explore an important section of the aspirational southerner. At one critical point, instead of opting for presenting a life-changing development with heavy dialogue and arguing, restraint is kept in check as one of Blaze’s most memorable works serves as the device to tell the story, which is a confident and rewarding filmmaking decision. Blaze’s lyrics often expressed his own pain and flaws, meaning that regardless of how fantastic real-life musician Ben Dickey is at stepping into his shoes (and trust me, this is one phenomenal performance capturing not only the mumbling southern drawl but also a prisoner to Blaze’s self-destructive desires), his reenactment of the music is enough to move us.

In addition to trying to reach the big time artistically, Blaze also had a marriage to Sybil Rosen (played here with expected support and heartbreak from Alia Shawkat in a very tender and nurturing turn), whose memoirs titled Living in the Woods in a Tree: Remembering Blaze Foley serves as the basis for Ethan Hawke’s script, also co-penned with the actual Sybil. Among being a very talented musician, Blaze was also highly intellectual and even philosophical, touching on everything from where confidence comes from to the idea that loving those that aren’t perfect is a blessing as it grants each significant other the opportunity to uplift their partner. Pleasantly, Sybil has also been done justice brought to the silver screen, all the way to the point where it’s actually disheartening to learn that content involving her towards the end of the film was edited out for time (to be fair, it’s understandable as Blaze is already north of two hours). Still, it’s a testament to how well written and presented not just her, but other notable figures in Blaze’s life are.

It also helps that, following in line with the country music genre frequently being used to tell stories rather than traditional catchy songs, a great deal of Blaze simply rambles on and on rarely ceasing to be entertaining. Much alcohol is consumed, and if you’ve ever been a party where that happens you’re aware that it quickly turns into everyone in a circle reminiscing on memorable times; many characters do that here, including Blaze who recounts a story about his father and coffee that is absurdly hilarious. With that in mind, the tone and structure of Blaze feel like a worthy country song itself.

Admittedly, as Blaze approaches its climax it does slightly begin to wear out its welcome, but there’s a lot here to digest. It’s rare for a biopic to cover a lot of ground without feeling as if it’s rushing through every key moment, but Blaze works due to some intelligent creative decisions that vibe with country music and terrific performances. Ben Dickey is both an incredible actor and musician. Blaze mentions that he never wanted to be a star (stars shine bright but eventually die out), choosing to shoot for the status of legend. As far as the country music scene goes, Blaze Foley has accomplished that ambitious and extraordinarily difficult feat, while Ethan Hawke’s passionate love letter biopic is sure to help spread the legacy.