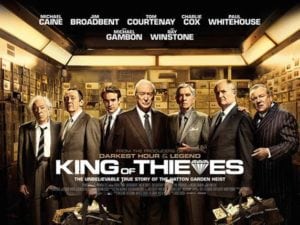 A gang of ageing crooks decide to crack a job they’ve all been wanting to carry out for years – an Easter weekend burglary of the Hatton Garden safe deposit facility. 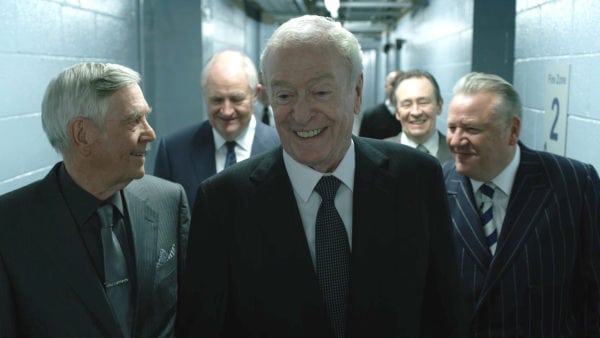 “The problem with gold is the effect it has on people,” says Michael Caine’s seasoned thief Brian Reader at the beginning of King of Thieves, as if foreshadowing the rather shaky and unfocused movie that lies ahead. This film finally marks the glossy, wide-release take on the £200m Hatton Garden burglary that took place in 2015. The heist has provoked its own cottage industry of low-budget independent films, thanks to its status as one of the biggest burglaries in British history, but this is the big one. They got Michael Caine, after all.

And things start promisingly for this one. Caine and his burglar mates meet after a while apart when they gather for his wife’s funeral. Conversation immediately turns to business and, specifically, the Hatton Garden safe deposits, which have long been a holy grail for Reader and his buddies, including the oddly psychotic Terry (Jim Broadbent), hard-of-hearing lookout John (Tom Courtenay) and Danny (Ray Winstone) who, at “only 60” is the young buck of the group.

The early stages of King of Thieves are fully committed to comedy. These are old school crooks and therefore retain a certain avuncular charm, despite the fact they are plotting a criminal act. A lot of this is to do with Caine, whose presence inevitably sparks memories of wildly enjoyable crime capers that your dad really loves. There are jokes about aching joints, impaired senses and the exact kind of banter that has propelled dozens of ‘grey pound’ movies over the last decade or so. Call it The Best Exotic Marigold Heist. 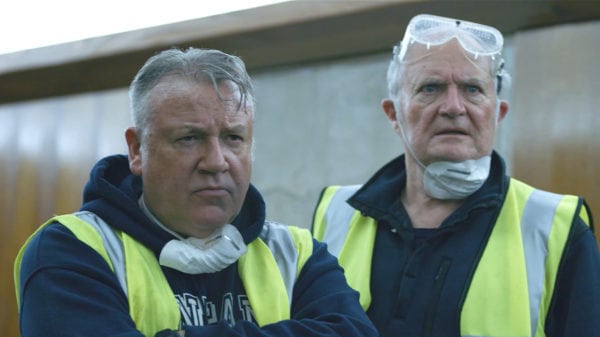 Soon, with the help of a young insider with delusions of criminal grandeur (Charlie Cox) and a slimmed down Paul Whitehouse, the crew are drilling a hole into the wall of the facility under the cover of darkness. The Theory of Everything director James Marsh, working from a script by Mindhunter creator Joe Penhall, wastes no time in getting to the heist but then gives it the bulk of the movie’s middle section, separating the larky, fluffy opening from the betrayal and brutality of the film’s final part. With no other people around to create close calls and the fear of getting caught, the heist drags and lacks the slickness of a Soderbergh crime sequence. Ocean’s 80? Not quite.

It’s once the post-heist segment of the story gets going that King of Thieves comes off the rails. The fluffy charm of the crooks is tossed aside as they all become loathsome, in stark contrast to everything the movie has told us about them up until that point. Soon, Winstone is throwing around the C-word and threatening violence on anyone who looks at him funny, while Broadbent throbs with acidic venom in one of his darkest performances in years. Caine, meanwhile, simply shuffles off to go and wander around the seaside somewhere while everyone else double crosses each other.

By this point, King of Thieves has lost all sense of its identity. It’s no longer clear whether the caricatures are supposed to be funny or terrifying and the narrative pinballs from location to location without any sense of what’s happening. The police investigation seems all too brief and entirely easy, with no time for the movie to generate tension as the net closes in on the perpetrators. It’s bizarre to see a film that has such fizz and purpose in its opening act simply lose all sense of shape to this extent. 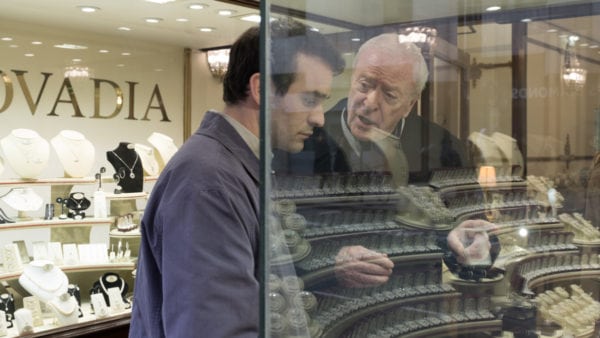 It’s disheartening to see what King of Thieves becomes given the acting royalty in its cast – if you can afford to throw Michael Gambon away in a cameo, you’re on to a good roster – and the compelling true story at its heart. The tale of the Hatton Garden robbery is one that remains packed with questions even today, several years removed from the events themselves. Marsh seems to lack any interest in delving into the psyche of these characters to decide why they did it, other than perhaps to offer the old mountain climber maxim of “because it was there”.

There’s certainly an audience for which King of Thieves will be enough, particularly in its zany, enjoyable early stages. Much like the characters, though, its joints are creaky and its foundations crumble, leading to a final half an hour that sputters and stalls like an old banger with all of the cinematic energy of a zimmer frame foot chase.