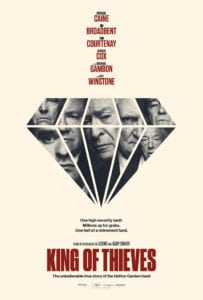 A crew of retired crooks pull off a major heist in London’s jewellery district. 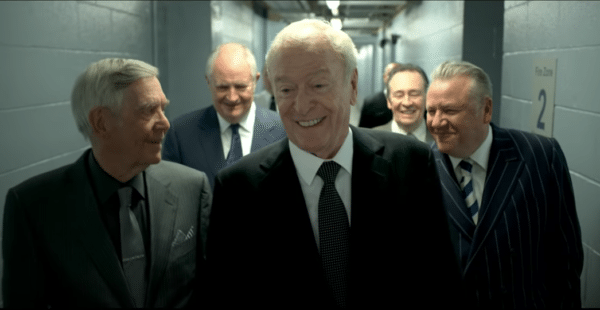 Though the famed Hatton Garden safe deposit burglary only took place back in April of 2015, you’d be forgiven for thinking it was far longer ago, what with this new dramatisation from James Marsh being already the third movie to take a stab at the material.

By far the best-produced of the three films, boasting an A-list cast and name director (The Theory of Everything‘s James Marsh), King of Thieves may be a disappointingly meat-and-potatoes retelling of the fascinating heist, but thanks to its gamely committed performers, it’s a lightly enjoyable ride for the most part. Sometimes that’s enough.

If you’re unfamiliar with the facts of the case, the heist saw 77-year-old superstar thief and recent widower Brian Reader (Michael Caine) assemble a gang of aged crooks (Jim Broadbent, Tom Courtenay, Paul Whitehouse, Ray Winstone and Michael Gambon) along with a younger, tech-savvy comrade (Charlie Cox) for one last score. The target? Hatton Garden’s swanky safe deposit storage unit, which housed reportedly hundreds of millions of pounds worth of bank notes, jewellery and other fancies.

On one hand, Marsh should be praised for not front-loading the movie with bloated padding disguised as character development, but to the same token, the heist kicks off with surprisingly little fuss or preamble. Perhaps that’s a deliberate effort on Marsh’s part to realise the totally un-sexy banality of planning a heist, but it does seem a little too easy at first. 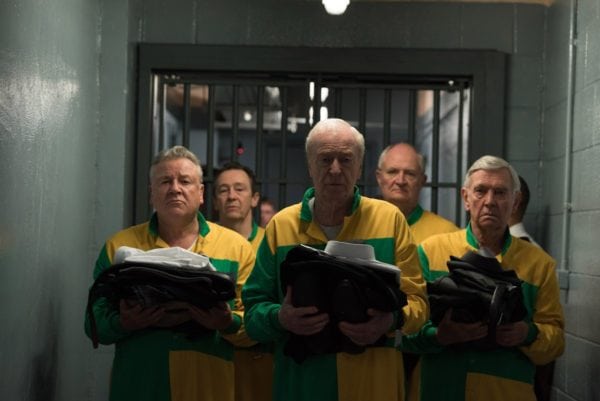 Once the job kicks off at the end of act one, interest perks up considerably, and the extended set-piece that follows is a lot of fun. Sure, it lacks the slick execution or heightened ingenuity of an Ocean’s movie, for instance, but this is supposed to approximate a real-life event after all. Nevertheless, the particulars of the heist are still quite fascinating – namely that, rather than drill through the vault door, they simply drilled through the side-wall to bypass it – and seeing it carried out by a gang of geezers is inherently amusing.

By the mid-way point of the movie the job is done with, and the rest of the film follows the men as they succumb to their greed and paranoia. Each man questions the man to his left, and unless you know how it all turns out already, Marsh does a rock solid job of maintaining suspense all the way to the finish. It does over-extend itself a little with the post-heist shenanigans, but thanks to the magnetic cast, it never sinks below steadily engaging.

To the surprise of nobody, Michael Caine is a transfixing force-of-nature in this film and the primary reason it overcomes its flaws. This character isn’t exactly a stretch for the legend, but he’s given by far the most interesting codger of the bunch; on one hand an effing-and-blinding aged gangster, and on the other a deeply sad man seeking purpose in his life.

Also, where else can you see Jim Broadbent be more physically intimidating than Ray Winstone? Broadbent’s Terry Perkins is by far the most volatile member of the group, and the cuddly actor’s against-type casting pays off quite splendidly. As for Winstone, he dines out on his usual shtick, but he’s so damn good at it few are likely to complain. Charlie Cox, meanwhile, will remind Daredevil fans he’s actually British, and his youthful nervousness brings him to both amusing and disconcerting odds with the rest of the team.

On a technical level the film doesn’t really do much to impress, which is a shame given the more exuberant style of Marsh’s prior films. The editing in particular is a little too busy for its own good, and it’s easy to question the logic of splicing in clips of better heist films amid the action; it just provides a constant reminder of how this film isn’t really achieving its fullest potential.

There will also be understandable hand-wringing over this movie letting its central old gits off rather lightly. The tone basically equates to a gang of irascible yet quick-witted geezers stealing from the faceless, insured wealthy, and some may find that troublesome. And though shockingly little effort is made to fully engage with the psychology of the scenario, thanks to the strong performances, the “characters” still feel adequately delineated and fleshed-out beyond the inevitable, ho-hum pleas for sympathy in the final stretch.

King of Thieves is a surprisingly workmanlike effort from director James Marsh, but elevated substantially by its brilliant cast.