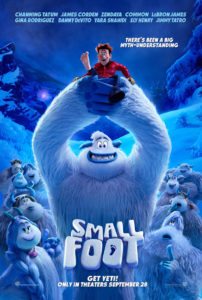 A Yeti is convinced that the elusive creatures known as “humans” really do exist. 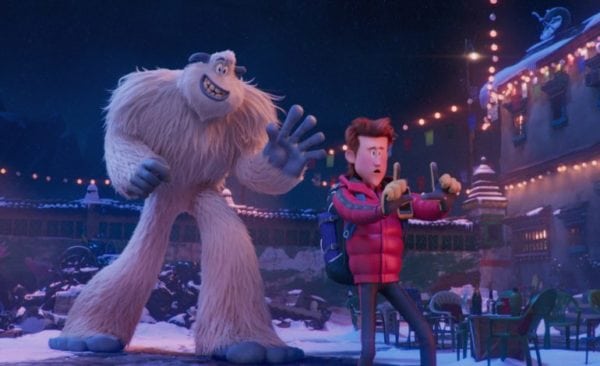 For as much as animated works do deserve some kudos for implementing child-friendly messages such as “staying true to one’s self”, it’s also something I seem to be writing a lot when reviewing these movies. Furthermore, it has gotten to a point where if that influential element does exist, there’s a sensation to begrudgingly just give out a passing grade on the merits that not only will kids enjoy it, but they will also take something of substance away regardless of how adults view the same experience. However, there comes a point where enough is enough and animation studios need to try finding other means to succeed. Surely, there are other important messages cartoon fare could be lecturing children on, right?

The answer is yes, as Smallfoot (the third feature film from director Karey Kirkpatrick, who has contributed to the screenplay of animated classics such as James and the Giant Peach and here is likely loosely adapting the book Yeti Tracks by Sergio Pablos), while containing the once again recycled aforementioned message, is actually far more interested in exploring parallels to religion and questioning not just the world around you, but the very people who are dictating what you should think. High up in the mountains is an icy cool home to many yetis strictly governed by Stonekeeper (multi-talented celebrity Common) who enforces numerous beliefs scribed in stone that he says have existed since the beginning of time. Many of these inscribed tales are ridiculous, such as nothing being below the sky-high mountains (cloudy smoke clogs up vision while peering over the edge, meaning that these towering but endearing creatures do not know that there is an entire world around them below) and that a gong must be banged on in order for the sun to rise (which, according to the stones, is not actually the sun but I won’t spoil the joke here). How do they smash the gong? Amusingly, by catapulting from perched up high and lunging a great distance headfirst into the shiny metal, which is made funnier considering that this is Danny DeVito’s job voicing a yeti named Dorgle. 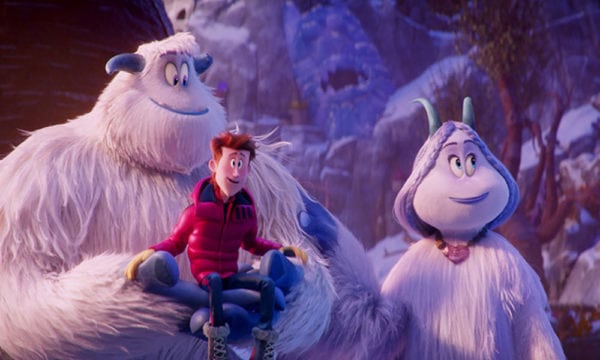 Channing Tatum lends his voice to Migo, the son of Dorgle who is enthused to take over the gong-smashing duties as soon as his father determines that he is ready. One day while practicing, Migo overshoots the target as a result of fawning over Meechee (another multi-talented entertainer, Zendaya) while soaring, leading to a series of events where he discovers a Smallfoot, or in simpler terms, a human being, which the clan does not believe exists as per the stones. Immediately, he is banished from the village by the Stonekeeper for disrupting the status quo, which is kind of eerily similar to what happens to anyone that questions current POTUS Donald Trump. Admittedly, this portion of the narrative is a bit of a tough sell considering how nonchalant Dorgle is about his own son getting exiled, but we roll with it because otherwise, we don’t have a movie.

Anyway, Migo stumbles upon Meechee, who is also looking to prove the existence of Smallfoots and even has the assistance of a ragtag group of outsiders, together making up the group known as SES, or Smallfoot Evidentiary Society. And while the character dynamics between Migo and Meechee is meant to encourage audiences, especially those of the younger variety, to not take ancient scribings at face value, instead searching for the answers yourself and believing in what you see with your own eyes, the Three Musketeers of sorts following her serve as the comedic relief. LeBron James, in particular, continues to prove that he should not just shut up and dribble, as he is more than just a basketball player. The NBA star and political activist continues to have a handle on perfect line delivery that allows every joke to land; not only is he hilarious in live-action form as the romantic comedy Trainwreck proved, but he can also apply that same humor with the same level of effectiveness doing voiceover work. Truly, he is one of the highlights of the entire movie. 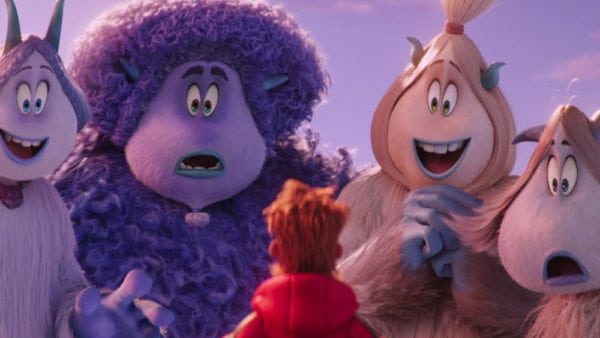 Elsewhere in the world is Percy (voiced by James Corden), an animal lover and once popular TV star stuck in hard times bringing in pitiful ratings. His plan is to fake the finding of a yeti in order to create a rating spike, which again, is not unlike the behavior of actual television shows ranging from newscasts to similarly themed wildlife shows you can find surfing through cable. As you can probably expect, he comes across some yetis for real, bringing about another refreshing theme for an animated film, this time touching on shattering communication barriers. As an audience, we can understand the English all of the characters speak, but to humans, the yetis sound like, well, screaming animals, while to the yetis mankind is equipped with an indecipherable squeaky voice. Cue silly scenes of the two species coming to understand one another.

All of these plot points actually work; the story breezes along nicely despite its predictable nature, the characters are all likable and voiced with talent, and while not on Pixar’s level, the animation is solid. To be fair, chilly scenery is always gorgeous and difficult to mess up rendering. However, the greatest stroke of brilliance on display here is actually casting some musicians; the film features quite a few song-and-dance numbers, but due to the distinct style of each performer there’s a wide genre variety to the music. Zenday’s and Common’s songs especially stand out, with the former deserving of an Oscar nomination even though it’s already a foregone conclusion who is winning that category. 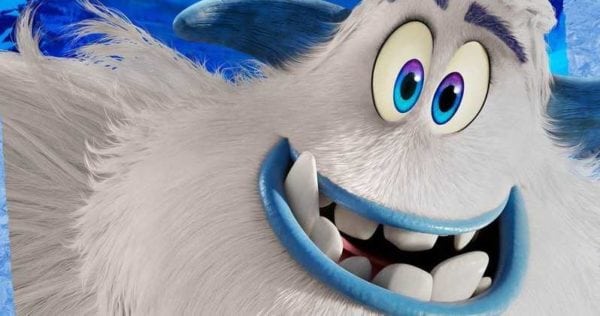 Being realistic, Smallfoot containing as much narrative depth as it does is a bit shocking; the writers could have easily patted themselves on the back for having a somewhat original and cute concept in two species believing that each other’s existence is nothing more than a crackpot myth, but instead they stuff it with multiple socially relevant lessons that never become overbearing even if they are fairly in-your-face. The downside is that there is a trade-off between themes and characterization, although the charming cast and slapstick comedy is enough to mitigate that shortcoming. Suffice to say, Smallfoot has Saskatchewan-ambition alongside properly functioning as lighthearted fun for the whole family.