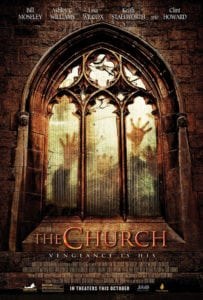 After a Pastor and select members of his congregation agree to sell his family’s 100-year-old church to a local developer, their sins begin to manifest in front of their eyes and hell breaks loose…inside the church. Trying to capitalize on the trend of religious horror, The Church doesn’t reach the level of other entries into this growing sub-genre. While it has enough to tell a cohesive story and features some talented actors, this feels more like a chore than escapism horror entertainment. The film is cheap, lackluster, and overall a disappointment. Thankfully horror legend Bill Moseley can carry even the most tedious of movies.

The Church opens with a couple of men in a bar, talking about the local pastor (Bill Moseley) and his refusal to sell his church. As they get drunker and more irritated about the situation, they decide to visit him. Unfortunantely for the pair, their visit doesn’t last long as they mysteriously vanish in the church. Sadly they couldn’t disappear before the actors start delivering their dialogue as it is shockingly weak and poorly acted. That ends up becoming a running theme throughout the film, weak dialogue and bad acting. As I mentioned earlier, things pick up once Moseley’s Pastor James enters the movie, but it’s almost too late by then.

With smaller independent films like this, it’s easy to forgive mistakes, but this movie feels nearly inexcusable. There is a check-list of things this just got wrong. Everything from the lazy camera work to some questionable special effects, The Church misses the mark on the basics of filmmaking. When the sins of the churchgoers begin to manifest, it usually manifests in humorous ways like papers flying around the room due to an open window or a broken AC. The haunting begins to pick up closer to the end, but the filmmakers decide to put red gels over lights as a way to show things are getting satanic. Again, very amateur and doesn’t carry the intended impact. And if you add in the terrible special effects, there is nothing to praise on the production side of The Church. During the second act, there’s hope that The Church would turn into something “so bad that it’s good.” Something like Sharknando or 80’s cult classics like Night of the Demons, but this ends up more on the level of Birdemic than anything else. There are a few times where the cheesiness feels purposeful, like the filmmakers intended for the laughs, but more often than not, the laughs are unintended. By the time the ending is upon us, the production is getting just as crazy as the actor’s on-set. It’s like the filmmakers threw every trick at the wall and just hoped something will stick.

Usually, a film like this is something I suggest watching on Netflix if you are a fan of horror films, but The Church doesn’t even come with that recommendation. Just wait till Dom Franklin grows as a director cause there’s some raw talent there, but this isn’t the film that showcases it. If you are craving some Bill Moseley, check out one of the other hundreds of low-budget independent horror films that star the actor.

Tearing into a movie like this is never fun. It’s easier to praise a film than to talk about the negative aspects, but there is barely anything to appreciate about The Church. The casting of Clint Howard and Bill Moseley is probably the highlight as the two seasoned actors did the best they could with the material given. Also if writer/director Dom Franklin can tackle this story with a bigger budget and more experience, then it might be a more enjoyable experience. There’s a good film deep within The Church, but the negatives outweigh the positives.