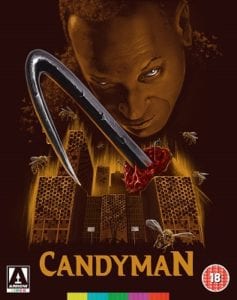 A university grad student studying urban myths becomes the victim of the fabled Candyman after she says his name five times into a mirror.

It has been said that the 1990s was not a fruitful time for producing horror classics, and there is some truth in that. The ‘70s had their genre game-changers and the ‘80s was more about quantity than quality but both of those decades get a lot of reverence whereas the ‘90s is seen as a bit of a dry patch. The truth is that horror went through a transgressive stage after the excesses of the 1980s and its production line run of slasher sequels, gloopy body horror and horror-comedies that filled video stores the world over, and while the amount of serious contenders for the Horror Hall of Fame may be fewer than in other decades nobody can deny that when horror hit during that period, it hit hard and offered up some deliciously different ideas than the tired slasher villains of the day, and Candyman was one of the most prominent of these new monster movies.

Obviously you’ve already seen Candyman and don’t need to go over the plot in any great detail but as a quick reminder the film is based on Clive Barker’s short story The Forbidden, although director Bernard Rose took Barker’s narrative out of Liverpool and placed it in Chicago’s run-down housing project Cabrini Green where grad student Helen Lyle (Virginia Madsen – Sideways) is writing a thesis on urban myths and is drawn to the local legend of the Candyman. Similar to the tale of Bloody Mary, if you say Candyman’s name into a mirror five times he will appear and claim you as his victim, which is exactly what the sceptical Helen does, after which her life begins to spiral out of control as Candyman (Tony Todd – Final Destination) starts to kill those around Helen, framing her for the murders and forcing her to succumb to the tragic spirit.

What makes Candyman stand head and shoulders above many other horror movies from the time is that it feels fresh and original despite being very similar in essence to dozens of urban myths and common folklore stories. Thanks to Bernard Rose being totally invested in the material the imaginative touch of Clive Barker is all over the movie despite him not being directly involved, but a lot of the credit must go to the career-best performances from Virginia Madsen and Tony Todd. Todd is imposing and majestic as Candyman, who was a white man with long blonde hair in Barker’s story, and his almost Shakespearian delivery of his dialogue in his rich, deep voice is as iconic as anything that Robert Englund or Doug Bradley have given to the genre, whilst Madsen is wonderful as Helen, starting the film full of confidence and doubtful bravado but reduced to a quivering wreck by the end, and with both actors having to go through the wringer to act out their scenes with mouths full of bees (Virginia Madsen had to be hypnotised in order to do the scenes) you can see the results of their dedication on the screen. 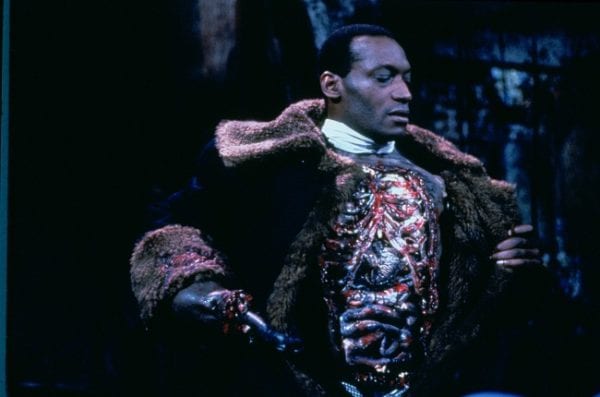 Candyman’s status as a great horror movie is pretty much without question and as you’re most probably already familiar with it then this reissue does beg the question of whether to double-dip if you already own it on Blu-ray or upgrading if you only have it on DVD, and the answer is a huge ‘YES’ for not only do you get a 2K restoration from a 4K scan that looks a little gritty in the lighter scenes but is tremendous when the screen gets darker, especially during the film’s climax as the blacks and dark blues of the night are contrasted beautifully with the orange glow of fire and the picture looks immaculate, but you also get two different versions of the film. The first disc contains the US R-rated cut, which is the standard version that everybody knows, but the wizards at Arrow Films have also included the rarer UK Theatrical Cut which isn’t hugely different but does offer up a bit more (welcome) gore, and happily both cuts are in 2K. Another reason to be cheerful is the brand new 28-minute interview with Clive Barker where the author and filmmaker discusses his movie career and what influences him which, for hardcore fans, is probably worth shelling out for on its own.

As if those weren’t enough then there are brand new interviews with Tony Todd and Virginia Madsen, brand new audio commentaries from Tony Todd and director Bernard Rose, Kim Newman and Stephen Jones, plus interviews with production designer Jane Ann Stewart, writers Tananarive Due and Steven Barnes, special makeup effects artists Bob Keen, Gary J. Tunnicliffe and Mark Coulier, and writer Douglas E. Winter. All of this comes housed in a smart looking box with lobby cards, a poster, collector’s booklet and hardback book featuring the original hand-painted storyboards by Bernard Rose so you cannot deny that Arrow have dug deep and put together a pretty comprehensive package, although some may grumble that not all of the Clive Barker-centric featurettes from previous releases have been transferred over. It’s a small gripe seeing as there is a new interview from the man to get stuck into and as an overall collector’s item this lavish set is one of the best that Arrow Films have put out so far, but what is also very pleasing is that as a film on its own Candyman still holds up incredibly well, being an intelligent and creepy horror movie that fully deserves to be held in the same high regard as the likes of Hellraiser, A Nightmare on Elm Street and Halloween as an enduring classic.