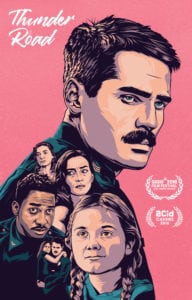 A police officer comes to grips with a death of his mom when giving a heartfelt eulogy at her funeral. 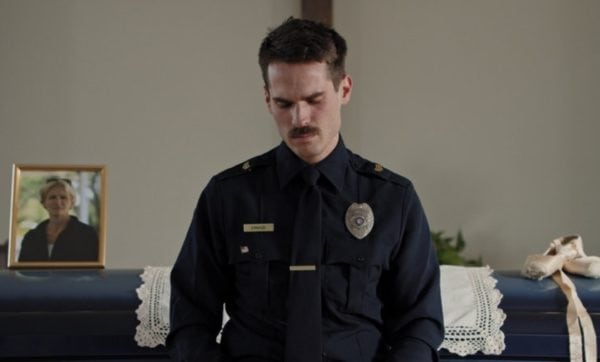 If there’s any justice in the world, Jim Cummings will enjoy a prosperous career boost off the back of this delightfully unassuming tragi-comedy, adapted from his own Sundance Grand Jury Prize-winning 2016 short film of the same name. Braced boldly between effervescent character study and edgy dark comedy that pushes right up against the tonal brink, Thunder Road has cult gem written all over it.

Writer-director Cummings also stars as troubled police officer Jim Arnaud, who in the movie’s excruciating opening scene is eulogising his recently-passed mother at her funeral. The sequence, a masterclass of slow-building awkwardness as Jim struggles – and inevitably fails – to keep himself composed, unfolds over an unbroken 10-minute take, setting a devastatingly raw and perversely funny tone from the outset.

At first glance Cummings’ surly protagonist might look a touch silly with his well-groomed pornstache, and indeed, it’s easy to imagine Jim Arnaud as the boorish star of a broad, Super Troopers-esque knock-off studio comedy. This deceptive exterior, however, belies one of the most enticingly bare-naked characters and uniquely engrossing dramas of the year. 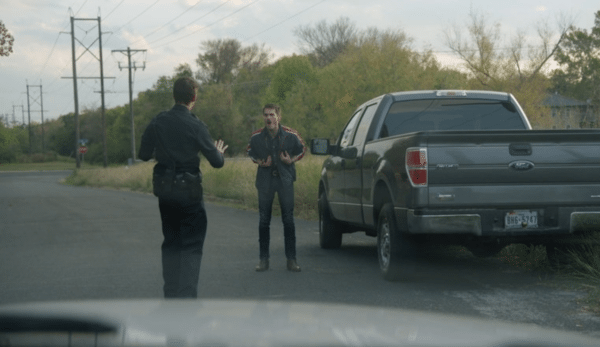 Cummings’ film is a grieving-man drama that’s completely unafraid to go to places both grim and goofy, but unlike many ambitious upstart directors, he also has a tight grasp on formal filmmaking discipline. Cummings employs splendidly shrewd use of long takes, typically only cutting when absolutely necessary while focusing long and hard on his own expressive visage. The conviction of his performance has a hypnotic quality that only makes these long takes that much more stunning.

And while many one-man bands might make that seem like an icky act of runaway egomania, Cummings absolutely earns it, primarily through a series of magnetic monologues as Jim expresses his unfettered frustration with the world. Unsurprisingly, he’s struggling to juggle mourning his mother, raising his young daughter, working through a divorce and holding down his job, at one point leading to an unforgettable shirtless rant which confirms Cumming’s performance as one of the year’s most surprising best.

The entire cast crackles, though; Kendal Farr is especially terrific in her screen debut as Jim’s young daughter Crystal, and Macon Blair has a wonderful scene as her schoolteacher forced to confront Jim about her delinquency. The results, naturally, are awkward as hell, yet like the entire movie, are also suffused with an aching, deep-resonating humanism.