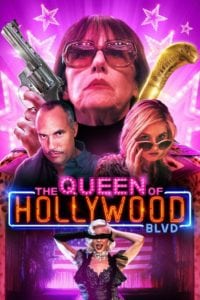 On her 60th birthday, the proud owner of a Los Angeles strip club, finds herself in hot water over a twenty-five year old debt to the mob, leading her on a downward spiral of violence and revenge through the underbelly of Los Angeles.

Sometimes you’re destined to do something in life. The call is inescapable. Say your father is a film director, and say you’re named after Orson Welles, it goes without saying that you’re probably going to end up behind a directors chair one day. In the case of Orson Oblowitz, this rings true. Ironically, The Queen Of Hollywood Blvd, which aspires to tread a line between exploitation and arthouse, brought to mind Nic Cage’s recent master-work, Mandy. That was directed by a second generation genre director (Panos Cosmatos, son of the legendary George, most famous for Rambo: First Blood Part 2).

The Queen Of Hollywood Blvd is a simple tale of a Hollywood strip club owner on her 60th birthday. A hard life lived in a seedy corner of Hollywood and a reputation which precedes her. It shows on every line of Queen Mary’s face (played by Rosemary Hochschild, real-life mother of Orson). A gangster comes to reclaim a long standing debt, eyeing the deeds to the club and then matters descend into a string of bloody chaos, kidnapping, ransom, and tasks that Mary must perform in order to get her adult son back alive.

The film has an array of influences throughout, with visual nods, or stylistic reference to everyone from Welles, Kubrick, Tarantino, David Lynch, Nicolas Winding-Refn, to explo specialists like Russ Meyer and Roger Corman. Films have mixed such varying influences before, to varying degrees of success. Mandy as an example, was distinctly unique in it’s mixture of ingredients, and engrossing. Oblowitz doesn’t quite find the consistency. The performers are intentionally a little distant in their delivery. That distinct David Lynch style, of withdrawn, deliberately paced delivery, with the occasionally OTT character thrown in to jar against the restrain of the others. In this case, Roger Guenveur Smith is given license to intensely chew scenery, and he does so brilliantly. As a central character, Queen Mary never quite connected. Sometimes very withdrawn, sometimes emotionally overwrought, but without a middle ground. Elsewhere this also marks one of the final performances of the legendary Michael Parks. He looks almost tragically frail, and a bit distant here, but it’s one of the few moments of emotional connection in the film, even if that’s in part to watching a great actor with one foot in the grave.

The film has some good moments and it looks fantastic but it’s inconsistent (that sentence in itself is something oft said of Orson’s father, Michael Oblowitz’s work). It never quite hooks you entirely into the story. Things meander a little too much, whilst the central plot is a little too thin. There are good moments, visually inspired vignettes, but they have just enough to make a great trailer, not quite enough to make a great movie. That said, Orson Oblowitz, with a more consistent vision and honed script, has the visual prowess to make a great film, so I’m definitely interested in what comes next from him and Hollywood Blvd is worth watching.

Tom Jolliffe is an award winning screenwriter and passionate cinephile. He has three features due out on DVD/VOD in 2019 and a number of shorts hitting festivals. Find more info at the best personal site you’ll ever see… tomjolliffe.wordpress.com/films/