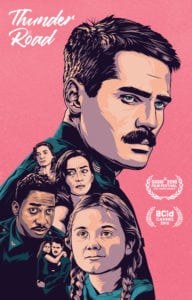 A police officer faces a personal meltdown following a divorce and the death of his mother. 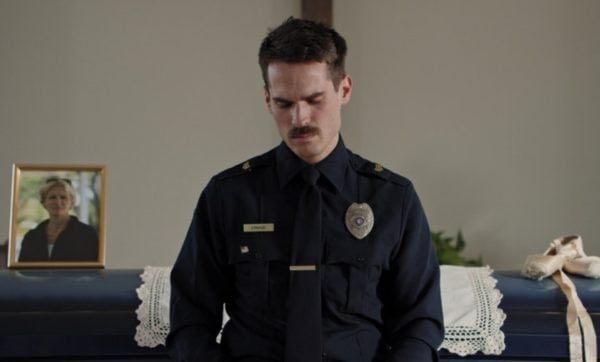 When your film is named after a widely popular Bruce Springsteen song, you’ve kind of already done all of the attention-grabbing you need to do to get the general public to contemplate buying a ticket or purchasing a VOD rental, but Thunder Road goes the extra mile and kicks off with writer/director/performer Jim Cummings’ (no, not the voice of Winnie the Pooh for anyone wondering) mama’s boy Jim giving a eulogy for his late mother, an unbroken sequence that lasts so long I seriously began to wonder if the entire movie would just be one long, extended tribute to the dead that takes twists and turns while revealing layers upon layers of the character.

If that were the case, very few people would take umbrage with such an ambitious creative decision. Within these 10 minutes, Jim slowly begins to lose his composure to the point of becoming an ugly- crying, sobbing mess. This is shortly after he tries to perform his own rendition of Thunder Road (the broken, hot pink, made for children CD player malfunctions and refuses to play anything), which as you can probably expect, turns into a disaster of equal proportions. However, this display of tragicomic buffoonery also comes equipped with a hideous dance number (I mean that as a compliment). In short, Jim makes a complete idiot of himself, and in many small independent films, this go for broke, undeniably talented combination of writing, directing and performing would be the only highlight, but the filmmaker runs with the story (Jim Cummings is actually adapting his own short into a debut feature, avoiding many of the pitfalls creators stumble into doing such a thing) diving into the psyche of a police officer desperately in need of anger management and psychological therapy, who is also going through a divorce, all alongside the death of his beloved mommy. 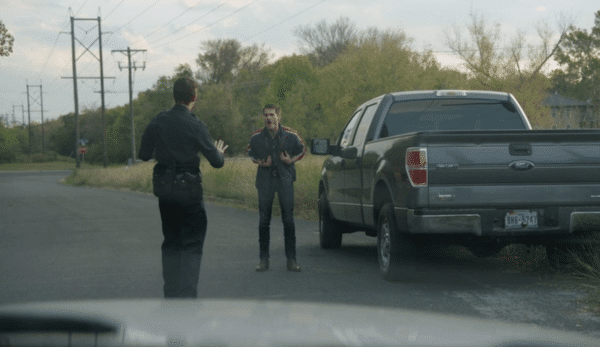 The brilliance of Thunder Road is how Jim Cummings strikes a tone of outrageous humor and legitimately earned sadness within the same scene, a feat he accomplishes multiple times throughout the dark comedy. Some of the earlier scenes see him attempting to work on the force despite being an emotionally unstable mess as a result of his mother’s passing and his superiors telling him to not return until a specified date, and it’s in these moments especially that we laugh but simultaneously worry for his sanity.

Due to the pending divorce, Jim and Ros (Jocelyn DeBoer) begin to end up with a problem child in their daughter Crystal (Kendal Farr turning in a remarkable performance for a young child actor dealing with complex broken home parenting), which is made aware to Jim at a school meeting. The results are, again, unhinged hilarity that paints the father as someone that might have Tourette’s syndrome, endlessly cursing even as he realizes it’s where his daughter picks up the fall language from. I’m not going to spoil the rest of his reaction, but let’s just say that many scenes in Thunder Road play on the unpredictable behavior of Jim and his potential to finally blow up at any moment. No one is safe from his tirades, including his best friend and fellow officer Nate (Nican Robinson). 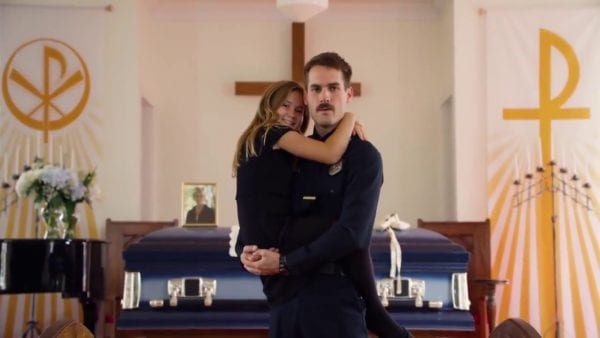 Specifically touching on Jim Cummings’performance, it seems to draw inspiration from the tics of notable comedic actors such as Seann William Scott and Jim Carrey, but also maintains its own distinct style of craziness that grounds the absurd dialogue and uncomfortable situations into something deeply human. For all the laughs this character gives us, you can’t help but feel you’re watching real life being thrown up on the screen just as much. Jim continues to get taken down a peg, and another peg, and another one repeatedly throughout the course of the film, but it all flows with a graceful believability of this man being absolutely unable to catch a break.

With that said, the setbacks finally do come to an end, and although Thunder Road does reach a touching conclusion, it’s hard not to feel that the turn that the ending takes is a bit too convenient. I won’t go as far as calling it a copout because there is some strong emotional resonance and it’s understandable why the film ends on the note it does, but various aspects of it would carry more weight if we spent a little more time with the bickering couple going through the separation process. The upside is that Thunder Road is briskly paced as it moves from razor-sharp, gallows humor moment to the next. Just remember that the laughs come at the expense of another man’s genuine pain. Jim Cummings has pulled off one hell of a tonal micromanagement, excelling at his trifecta of filmmaking duties. Place him on your list of filmmakers to watch; Thunder Road is unquestionably one of the best independent films of the year, and all around fantastic