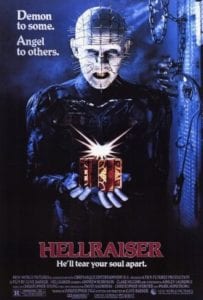 After opening a portal to a dimension in which pleasure and pain are one and the same, Frank is torn apart by the mysterious entities known as the Cenobites, taking his soul with them to hell. Sometime later, Frank is resurrected and longs to rebuild his body before the Cenobites realise he has escaped their clutches. 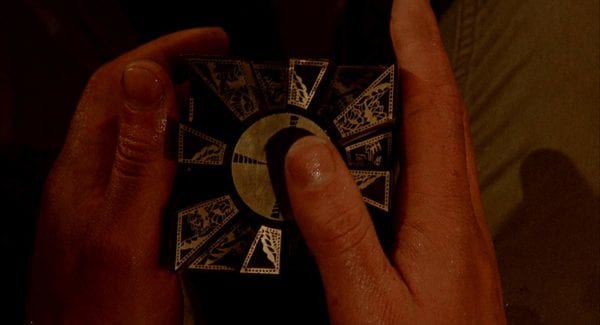 Stephen King once said ‘I have seen the future of horror fiction and his name is Clive Barker’.

While perhaps not as widely known as his American counterpart, Brit Barker is certainly a fascinating individual when it comes to his horror works which often emphasise the more macabre and sexual elements of the genre. Barker is especially fascinating when it comes to film adaptations of his writings, sometimes taking the initiative and directing them himself.

Those going into Hellraiser expecting to watch a supernatural slasher in which hapless victims are chased by Pinhead are likely to be disappointed; however, I can’t say that they won’t at least be left somewhat bewildered and intrigued by what they get instead.

It’s admittedly a nice little twist (or twisted) on the familiar “I’ll do anything for love” kind of story, although it’s interesting qualities are slightly hampered (or heightened depending on your points of view) by the fact that it’s a love story between two especially loathsome people. I understand that the characters of Frank and Julia are supposed to be the villains, but their selfish nature towards their entire situation and their “oh poor me” kind of attitude leaves them being deeply unlikeable and I honestly couldn’t wait to see them both meet their grisly fate or in Frank’s case meet it again.

What does make the story fascinating is the nature of Cenobites, who, despite their demonic appearances and violent means, are not the villains of the story. The Cenobites only dig in the chains because someone has asked for them, with the main purpose of these demonic dungeon masters being to allow people to experience a whole new world in which pain and pleasure are intertwined. Or as Pinhead puts it, they are ‘Angels to some, demons to others’. Essentially the Cenobites act like a travelling S&M club of the most extreme kind, the kind you have to sign a legal form before you go in. 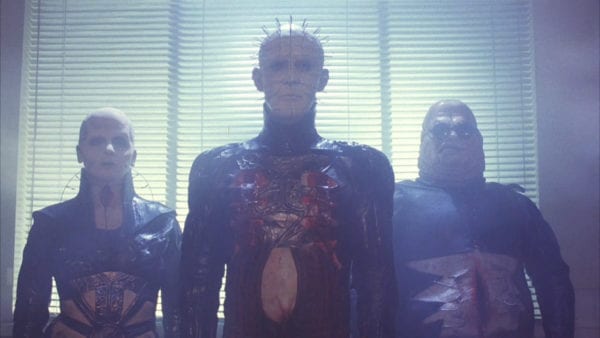 To her credit, Clarie Higgins gives one of the best performance of the film as the evil Julia, a manipulative, two-faced and deeply loathsome individual who has all the warmth and kindness of a concentration camp guard. Higgins is terrific at creating a character whom you love to hate, with the obvious glee that Higgins plays the role only adding to the sense of joyous anger that you feel towards her.

The supporting cast is largely fine but rather unremarkable throughout with Andrew Robinson and Ashley Laurence delivering effective performances with their respective roles, but not really leaving much of an impression on the viewer. Laurence’s performance as Kirsty, the supposed heroine of the story, is especially disappointing which isn’t entirely her fault given that the film’s script doesn’t really offer her much to do until the second half and even then it’s still mostly spent running around and screaming.

The performance that steals the show and is also the biggest selling point of the film, is that of cult icon Doug Bradley as the Cenobite leader dubbed Pinhead. Bradley, with his now iconic make-up and voice, creates a terrifying and mysterious creature of the demonic realm, with nearly every line he speaks being loaded with malice and gravitas while also being wonderfully quotable to boot. How can you not feel terrified when a pinheaded demon threatens that if you cheat him he’ll ‘tear your soul apart!’. It’s a memorable if all to brief performance whose rather limited screen time really makes this otherwise mixed bag of a film worthwhile.

While the story might not be everyone’s cup of tea, Barker manages to keep you distracted with some inventive and grotesquely beautiful special effects, with the practical nature in which they are executed making them all the more impressive to gaze upon. The manner in which Frank is resurrected is an especially impressive sequence with its heavy use of puppets and stop-motion photography making for a scene that is rather disgusting yet you can’t peel your eyes away from.

The design of the Cenobites is also fascinating, with each of them having their own distinctive look that leaves them looking only vaguely human and has you wondering what their respective appearances could represent. Aside from Pinhead, I especially like the Cenobite dubbed “Chatterer” with his torn open mouth revealing a pair of bloody chattering teeth. And that crying monstrosity that hides in the hospital walls is certainly enough to warrant a recurring nightmare or two as my therapist will tell you. 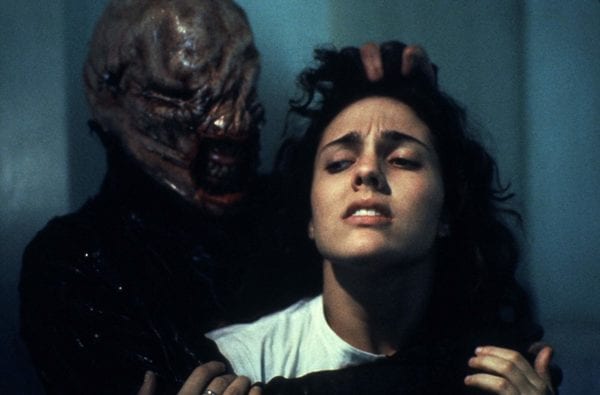 Hellraiser is a rather mixed bag that’s not going to be to everyone’s liking. While Harris and Bradley give memorable performances, the rest of the cast is rather flat and uninteresting, with the obviously dubbed American voices (the cast was largely British) being especially jarring at times. The pacing is also rather odd, with the film having no problem taking it’s time for the first hour or so before seeming like it’s in a mad rush to wrap up in the last half hour, leaving the viewer struggling to feel invested, especially given that the first hour is rather boring in all honesty.

However, the visuals are often stylish with their use of dark colours and creative lighting, the story does have elements that stop it from completely falling into mediocrity and the make-up and special effects are, for the most part, well put together and suitably freaky to look at.

Hellraiser is very much for the curious only. Some might like it, others might hate it. Either way, it has such sights to show you, you just have to be willing to look at them. Check it out if you’re curious. Just avoid most of the sequels.