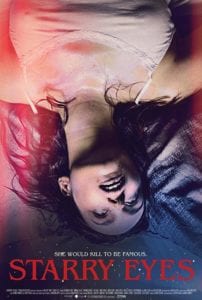 Sarah, an aspiring actress, is desperate to become a star. After securing an audition for a role in a horror film, Sarah is overjoyed to be given the chance to show her talents but soon comes to realise that the path to stardom is shrouded in darkness. 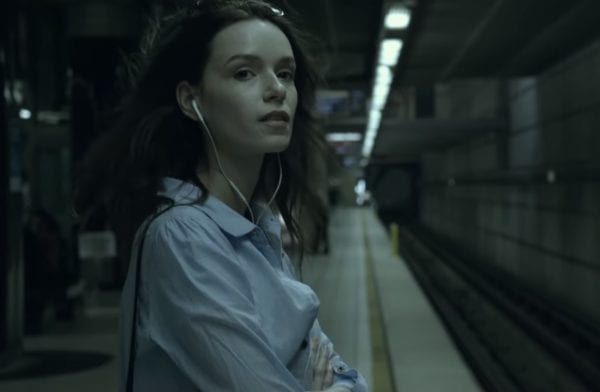 When Hollywood makes films about itself they are often slightly romanticised affairs. Only a few have dared to look at its more unpleasant parts. David Lynch took a surreal look at Hollywood’s dark backside with the dreamy Mulholland Drive, Robert Altman took a stab at with his scathing satire The Player and the master that was Billy Wilder had a go with his noirish Sunset Boulevard.

However, very few have dared to look at the truly dark side of Hollywood. That monstrous side that, until last year, lurked in the shadows as very much an open but still closely guarded secret. It’s this dark side of Tinsel town that is the focus of today’s entry, the overlooked horror drama Starry Eyes, a film that, given everything that has happened recently, now holds a chilling new level of significance.

While Starry Eyes is not specifically about the Weinstein’s of the world, the revelations that have emerged since last year have certainly given the film a rather disturbing and topical edge to it.

Sarah, an aspiring actress who lives a rather humdrum life of going to acting classes and auditions while also working a waitressing job that she hates. It’s in these opening moments in which we are shown the difficult and pressure that women in Hollywood are placed under. Expected to act a certain way and expected to look a certain way if they are to have any hope of making it in this tough and deeply competitive industry. This pressure is none more obvious than in the deeply tragic and uncomfortable scenes in which Sarah, even after merely having to double check her lines during an acting class, screams in anguish as she forcefully tears out clumps of her hair in frustration, acting as if she has committed some kind of unforgivable sin.

The audition scenes are easily the most unpleasant of the film, with the rather blunt and cold nature of the casting directors doing nothing to lessen the already suffocating tension. This already unsettling scene is made even worse when, despite doing an otherwise fine job in the audition itself, it’s Sarah’s acts of self-harm (which they demand she perform in front of them) that wins her a callback. Of course, the callback and the subsequent third audition are, unfortunately, exactly what you would think it is. It’s these moments, especially a fateful nighttime meeting with a “big movie producer”, that feels particularly disturbing given recent revelations.

It’s just a shame that for a film that was going so strongly that the meeting with the producer marks the moment when the film loses its momentum What began as a disturbing and engrossing look at the dark side of Hollywood and the way it treats aspiring actors turns into a decent, but less interesting, body horror/slasher film that really doesn’t have the same edge to it and you do find yourself becoming less invested as time goes on.

Quite simply, the change of Sarah from aspiring starlet to ghoulish slasher killer just doesn’t quite pack the same punch as the film’s earlier more restrained and more disturbing moments. Although, I will give credit to the film-makers on crafting some pretty decent gore and make-up effects, with them creating some suitably grotesque sequences of head bashing and maggot spewing.

I also didn’t care much for the plot thread that suggests Hollywood is run by a Satanic cult, which is possibly the height of cliche and is a quite frankly silly addition to what was already an effective story about the dark side of Hollywood, and it almost undermines the disturbing nature of earlier moments. Although I’d believe that Hollywood was run by Satan if it explains how The Emojii Movie was greenlit.

Alexandra Essoe is the main reason to watch the film, delivering a sympathetic and rather tragic lead performance as Sarah. Essoe manages to capture the pain and desperation that many people have possibly felt in their desire to have their name up in lights, with her sometimes clumsy enthusiasm being especially endearing. Essoe’s performance is such that you do find yourself really wanting Sarah to succeed in her dreams, which makes her eventual desperate, albeit deeply reluctant, willingness to give in to a creepy producer’s request to gain a film role all the more painful and tragic.

The rest of the cast do a fine job, especially those playing Sarah’s friends. I especially liked Noah Sagen’s likeable performance as aspiring Indie director Danny, one of the few who actually seems to support Sarah’s dreams. I also have to give credit to Fabianne Terese turn as Erin whose regular putdowns manage to create an entertainingly hateable character. The actors who play the sinister film producers are probably the weakest part of the cast, with the actors often leaning just a bit too heavily into their parts which result in them coming off as cartoonishly evil. Especially the arrogant bowtied casting director who sounds like the love child of Patrick Bateman and Agent Smith at times. 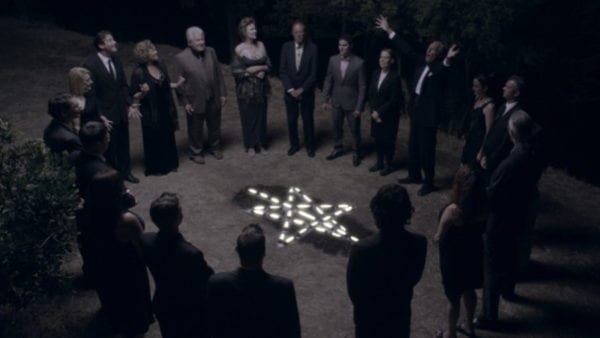 Led by a sympathetic lead performance from Essoe and telling a story that feels disturbingly topical in light of recent events, Starry Eyes is a highly flawed but nonetheless highly interesting little film. While it might not work for everyone, this is one that’s worth at least a look if you’re curious.