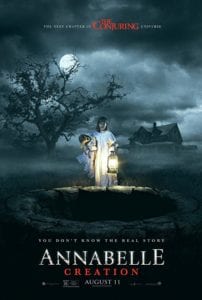 Twelve years after the death of their daughter, Samuel Mullins open up their home as a shelter for Sister Charlotte and several young orphaned girls under her care. As the girls settle into their new home, young Janice beings to suspect that there is something haunting the home that has set its sights on taking their souls. 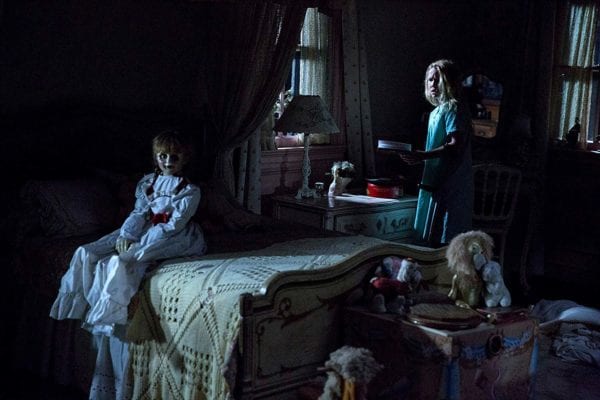 While the first attempt to spin-off the Conjuring franchise with Annabelle might have led a rather disappointing (or crap if you really want to be blunt) result, it nonetheless made money and of course, this has led to yet another MCU-esque decision, with the demons now enjoying their own solo franchises. Thankfully, it seems that the film-makers took heed of the criticism of the first film and took their time to craft a follow-up that doesn’t feel like a quickly made cash grab. This is Annabelle: Creation.

While the first Annabelle film acted as a prequel to the fist Conjuring film, taking place a few years before that film’s opening moments, that film failed to really take advantage of this premise and was saddled with a rather dull by the numbers plot. Creation takes the right approach and gives us a prequel that actually tells the story we wanted to see, the story of how the doll came to be the monster we all fear.

The demon was not conjured (pun somewhat intended) up by Satanic cults or some kind of witchcraft, but instead, it was conjured up through grief. People who had lost someone special and in some kind of desperation inadvertently summoned up a demonic force that proceeded to manipulate them until it became powerful enough to try and steal their souls.

Throw in a doll maker and we have a nice and simple origin story for what is, in my view, one of the creepiest images in modern horror, that bloody perpetually staring doll. I also have to give the film credit for the manner in which it cleverly manages to lead directly into the event of the first film in a way that manages to feel natural, without ever once feeling awkward and forced. Almost makes the first film worth it in the end.

The main problem with the first film was that it severely lacking in real scares and felt more like a greatest hits compilation of the most irritating of modern horror cliches, resulting in a rather predictable and mediocre affair that didn’t really leave much of an impression. 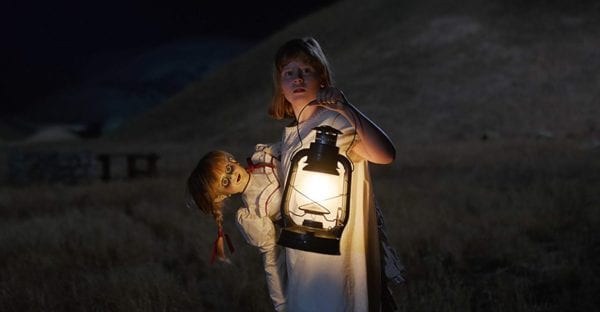 Creation, while still relying just a bit too much on these cliches, does at least try to alleviate these flaws by creating a thick ominous atmosphere that damn near chokes the life out of you. It’s a welcome change of pace that at least makes for a much more intense watch. The film also has a few great little subtle moments, including a nice spooky little cameo via a photo from the titular monster of recent new spin-off The Nun, and a very creepy moment involving some Punch and Judy puppets. Although that part might just scare me because I just really hate Mr Punch, dude creeps me out with that weird nose and grin of his. That and his domestic abuse.

While the film is much scarier than it’s predecessor, it does borrow a few too many tricks from the main Conjuring films, such as the now mandatory ‘demon out of focus over the shoulder’ shot, as well as the ever-present loud jump scares, of which there are many.

The film also lose some points by it’s not very subtle use of foreshadowing that essentially tells the audience what sort of menaces will be hassling the orphans later in the film, with the long lingering shots and remarks about a creepy scarecrow being so heavy-handed the characters might as well say “I wonder when this thing will try and kill us?”

What is vastly improved from its predecessor in the development of its characters, all of whom are wonderfully portrayed by the cast. Talitha Bateman is the film’s breakout star with her stellar performance as Janice, with the young actress able to traverse the character’s change from terrified and sympathetic victim to possessed child effortlessly. Bateman’s performance in the film’s second half, is perhaps her strongest work, with her managing to be genuinely creepy, retaining a subtle element of menace without overplaying the role or devolving into a cliched retread of The Bad Seed. 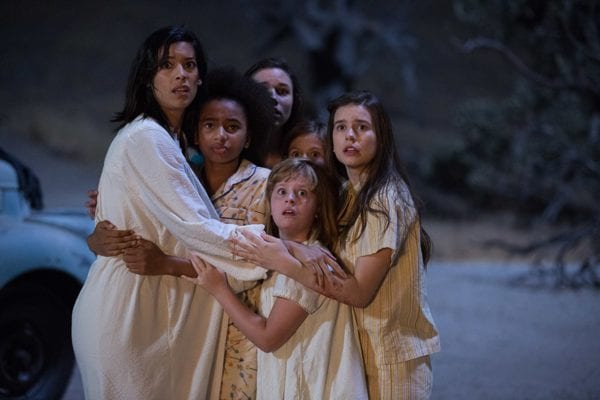 Bateman is backed up by a solid supporting cast, with Lulu Wilson as her best friend/surrogate sister Linda is also a standout, with her chemistry with her co-star often adding an emotional punch to the more playful and quiet moments. However, while these two are my personal favourites of the film, that is not to diminish the rest of the cast who all deliver fine work and manage to make you care about the characters. It’s just yet another instance in which its a marked improvement over what came before, and unlike the last film I didn’t spend it pining for the Warrens to make an appearance.

With strong performances, a nice slow burning ghost story, a nice atmosphere that, while relying a bit much clichéd tropes, still manages to be effectively spooky and a strong story origin story to a creepy creation, Annabelle: Creation is a massive improvement and gets the franchise headed back in the right direction. Here’s hoping that the upcoming third Annabelle film, as well as the other spin-offs, manages to keep this trend going. Check it out.