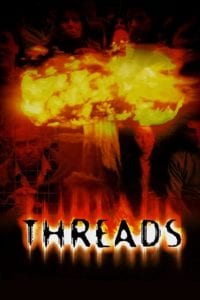 As the Cold War between the superpowers erupts into a full-scale war, the English city of Sheffield finds itself at the centre of a nuclear attack that forever changes the lives of its inhabitants for decades to come. 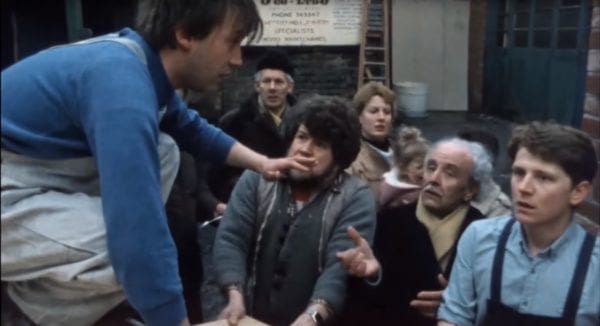 Well, we’ve reached the final week of this year’s voyage of cinematic horror. To start out our final week I’ve picked a film that’s very different from any film that I’ve reviewed before. It’s a film that features nothing remotely supernatural or science fiction influenced. It features no vampires, no zombies or anything to do with the undead. It doesn’t even a masked slasher killer hacking up teens.

The film I’ve chosen to kick off our final week deals with the most terrifying and real horror that humanity could yet face – nuclear war. And no film captures the sheer terror of this potential reality quite like the controversial and horrifying TV film Threads.

Broadcast by the BBC in 1984, Threads offers us a docudrama like an approach to the depiction of a nuclear attack on Sheffield after the Cold War turns hot and the superpowers decide to destroy each other and everyone in between.

The film is littered with small information exchanges, often via a rather cold and emotionless voice-over that comments on scenes in a manner similar to a news report, or via title cards detailing issues such as the importance of Sheffield due to its industrial capacities or its proximity to a NATO airfield. While this approach does make the film feel like a remake of 1960s nuclear war docudrama The War Game (a harrowing film in its own right that I reviewed as part of a feature last year), the difference in presentation and the generally larger scope of Threads renders it as arguably the better and more terrifying film of the two.

Much of the film is focused on the plight of an ensemble of characters from various walks of life, the often mundane domestic drama facing them making up the bulk of the film’s first half, while the threat of war looms large over them. The main focus of the film is on Ruth and Jimmy who decide to marry after Ruth becomes pregnant, prompting a rather awkward meeting between the families of working-class Jimmy and more middle-class Ruth. We also have frequent cut away to the men and woman Sheffield City Council’s who, before and after the bombs fall, essentially take control of the entire city and, or at least try to, direct the various civil defence agencies responsible for food and power.

The deliberate use of unknown actors in the parts, gives the film a feeling of authenticity, with these people being very much like those you would see in your own daily lives. Jimmy feels and acts just like any guy you would have a pint with down the pub and he’s initially more worried about trying to get his flat decorated than about war breaking out. At least until it’s too late.

The feeling of familiarity with the characters also makes their inevitable deaths throughout the film even more haunting. While some are lucky enough to die in the initial attack, we are forced to watch in horror as others, such as Jimmy’s parents, slowly and painfully die from burns and radiation poisoning. Once the bombs have fallen through, people barely look alive anyway, with a moment in which scores of survivors overwhelm a hospital looking like something straight out of a zombie film.

The film’s tension comes from the fact that throughout the first half, despite it’s more domestic focus, we know that war is brewing between the superpowers, with the rising tensions relayed via snippets of news reports about a Soviet-US confrontation in Iran that soon spirals into a full-blown war. Yet, even though we knew it was coming, the shock of the bombs hitting Sheffield still comes as a shock to the system. That’s mainly because it really does seem to come out of nowhere, to the point that even the characters question the accuracy of an attacking warning going off. 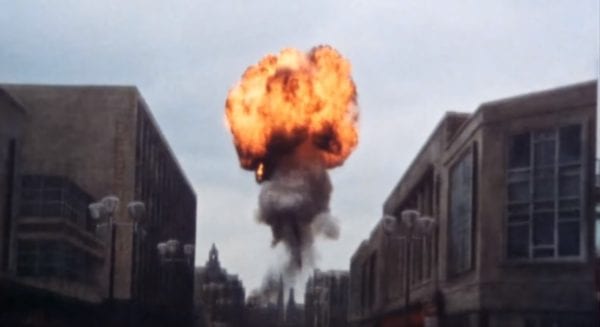 A scene in which a missile hits a NATO airbase outside of Sheffield is a particularly terrifying ordeal as people run around in terror, others stand in the street dumbstruck in fear, cars crash and others take cover from the distant shock wave as a low constant rumbling sound echoes around the city. Although, we do get one slightly funny moment in which the flash of the blast disturbs Jimmy’s father’s mid-morning dump. I’d take what little humour you can get from this scene because it’s the only the only laugh you’re likely to get in the entire film.

We’re already shocked by the terror of the initial blast and as we’re still processing what’s going on suddenly everything ends in a flash of light. The film goes silent, fires break out and then the silence is broken a thundering shockwave that obliterates buildings, homes and people as a missile hits the city itself.

Most films would end with the bombs dropping, for Threads, it’s only halfway. The film then charts the days, weeks, months and eventually a decade after the bombs fall. The grimy production design, gritty visuals and naturalistic acting all combine in this second half to present us with a realistic and believable depiction of what a post-apocalyptic Britain could look like. And it is the stuff of your worst nightmares.

Cities are no more than irradiated graveyards and the countryside is a barely inhabitable wasteland littered with the desperate and dying. A government still exists in Britain, but it’s a police state that shoots first and asks questions later. By the film’s close, Britain has devolved into a kind of Medieval state where food is currency, children are akin to feral animals and babies born are likely to be deformed if they’re lucky enough to even survive.

Suffice to say, Threads, especially in its second half, is easily one of the bleakest films ever made. Some films might give the viewer something sense of optimism to cling on to. Some kind of last-minute moment of hope that the future might just be brighter and that humanity will eventually dust itself off and rebuild. Threads has none of that. It’s a dark, bleak story that shows that once the bomb falls the show is over for humanity.

Bleak, depressing and horrifying, Threads is possibly one of the most frightening and depressing films I’ve ever seen. A film that, I feel, manages to show better than no other film before or since, that in a nuclear war there are no winners. There is only annihilation.

While some of you will find this film to be just a bit too much to get any kind of enjoyment out of (this isn’t that kind of film) I strongly feel that Threads is one film that I feel everyone should watch at least once in their life.