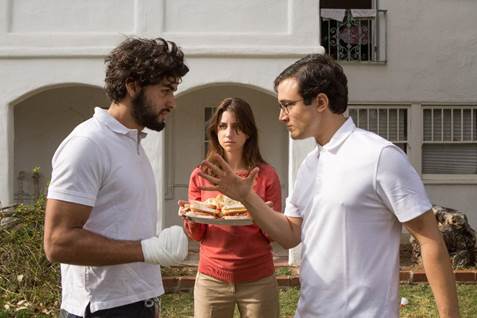 Ahead of its premiere tomorrow at the Downtown Los Angeles Film Festival, we’ve got an exclusive clip from director Jean Lee’s Original Sin, a new comedy revolving around a love triangle between a sexually frustrated housewife, her uptight husband, and a freewheeling artist.

The clip features a game of Rock Paper Scissors between the artist and husband, which quickly descends into violence with hilarious results. Check it out here, or watch it over on our YouTube channel…

After moving to Spain for her husband, Eva, a Paraguayan woman of class and elegance who always behaves in an appropriate way, finds herself bored, unhappy, and sexually frustrated. After Eva compulsively buys a provocative and offensive piece of art the painter shows up to hand-deliver his work. Their sexual tension grows until they inevitably end up in bed. When Eva’s husband returns home early, an absurd battle of strengths and weaknesses among the three characters ensues.