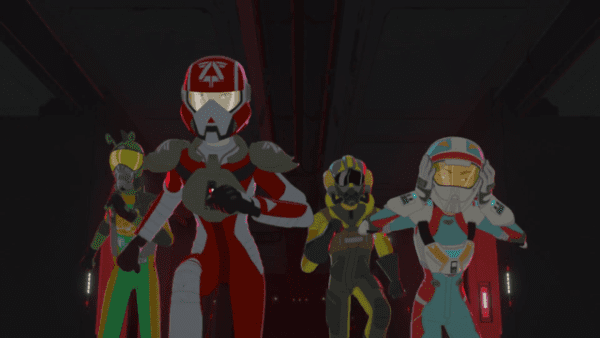 With the third (technically second due to the hour long premiere) episode of Star Wars Resistance, the new series set in the galaxy far, far away introduces more elements of the Colossus’ workings and the growing dynamics between Kaz and the pit crew. ‘The Triple Dark’ featured some more typical Star Wars elements than ‘The Recruit’ did, but still utilized more of its own voice and brand of humour than other Star Wars series have been known for. It was still entertaining, but audiences who want to see more of the Resistance and First Order may have to wait a bit longer and adopt the old Jedi lesson of patience.

‘Triple Dark’ mostly dealt with Kaz settling into his new role as a regular mechanic on Colossus, but he was very eager to start his real mission as a spy for the Resistance and track down the First Order’s informant. Most of the episode’s humour derived from him through his attempts to blend in while being covert or knowing next to nothing about being a mechanic. Through this, the episode picked up on a couple threads left from ‘The Recruit’ as Kaz had to deal with the fact he still owed credits to some of the Colossus’ less reputable citizens. Kaz’s characteristics are bit more on display as he improvises his escape against these thugs as well as an attack on the station from a band of pirates. Kaz also reveals an attachment to a trophy he carries around with him that signifies his first win at a race when he was younger, which tells us his boast at being a great pilot is more than that. However, one piece of information in that reveal is how his father didn’t want him to compete, but he did it anyway to prove his father wrong. This subtle acknowledgement further emphasized Kaz’s difficult relationship with his father that was alluded to in the premiere as well as his somewhat annoying drive to prove himself to the Resistance, a fact which deepened his character a bit more. There was a little bit of action in here as well which placed the story in a bit more of a traditional Star Wars story as Kaz and the pilots had to defend the station from a band of pirates. While the animation still takes a bit of getting used to, the aerial battle was well choreographed and entertaining, but also showed the races for the pilots are more like training for them for situations just like this. The designs of the pirates were also cool, showcasing them wearing old and valdalized Imperial or Rebellion-era armour It was an interesting choice, though, to keep Kaz grounded during the battle and while he never took to the sky himself, the show used the opportunity to highlight how thoughtful he could be from the ground as he managed to incapacitate the pirates’ communication systems. Another rather bold choice was not giving Kaz the credit for saving the day, showing how he had grown a just a little beyond needing the acknowledgement for how good he is by keeping his civilian cover intact to his colleagues.

Another interesting story beat which went by rather subtly was Yeager telling Kaz that most people don’t know what the Resistance is. It was a very quick point that accomplished two things. First, it reminded audiences that the Star Wars universe is a very large place so of course the average person won’t know of every single conflict in the galaxy and secondly, taking place six months before The Force Awakens, it highlighted just how little people, the New Republic included, recognized the growing threat of the First Order and what Princess (now General) Leia was trying to accomplish. Hopefully we’ll learn a bit more about the state of the galaxy during this time and why these two groups are not on everyone’s mind yet as how some of the books, namely Star Wars: Bloodline, revealed long ago. Star Wars Resistance had an entertaining episode that dealt a little more into some of the traditional aspects of the franchise than what most fans are used to. As eager as Kaz is, he’s still a little too excitable and humour too on the nose, but hopefully that will curb the more the series goes on as it finds its groove. The action and animation were nicely done and the story introduced some intriguing elements, making ‘Triple Dark’ a little more enjoyable than ‘The Recruit’. With Captain Phasma’s introduction at the episode’s conclusion, let’s hope it won’t be too long before the conflict really starts being driven to the forefront of the series.