Samuel Brace on the four best moments from Daredevil season 3… Hallelujah! Our prayers have been answered. Daredevil finally overcame its most significant of obstacles and transcended to a higher plane of existence. It looks like I can stop complaining about Netflix Marvel shows never having enough storyline to cover their allotment of episodes, as season three of Daredevil put all past series to shame, finally bucking the trend. Every episode this season felt necessary, every episode was driven by this year’s main plot, and every episode was of an exceptional quality. What a joyous experience! How refreshing! All I can say is thank you. Thank you, Netflix for finally answering my prayers. And thank you to new showrunner Erik Oleson for making it all happen. I believe it’s quite clear that this was the best season of the show yet and a lot of that can be attributed to its remarkable consistency.

Of course, when it’s all said and done, when time has separated us from season three, what we will ultimately remember are the standout moments that punctuated it. Luckily, these were legion. However, it seems quite clear to me that there are four moments in particular that are worthy of elevation, four moments that helped sear this most wonderful of seasons into our memories.

Murder at the Church 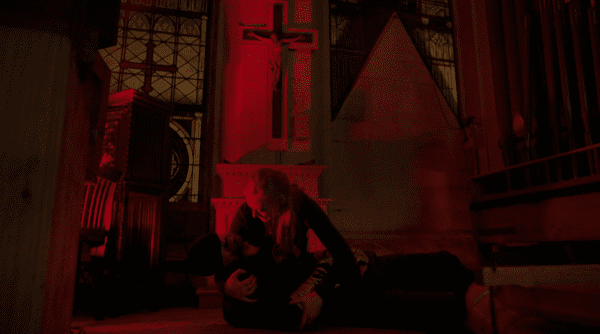 It’s wonderfully apt that one of the three main tussles between Daredevil and Bullseye took place at a church, given the immense presence of God present within the season and the myriad Catholic imagery found throughout. Daredevil season three didn’t hold back on its Christian messaging as Matt struggled, not with his belief in God (that never wavered) but with his relationship with Him. And choosing Matt’s church as the battleground for one of the season’s most emotional confrontations with his latest foe was a wonderful decision. The fight was brutal and choreographed to perfection (surprise, surprise) but when you lace in the weight of Karen’s arc, the death of Matt’s spiritual guide, and the prevalent Christian imagery, well, this scene truly transcends and caps off another exceptional episode of TV. Karen cradling a broken Matt, resembling Michelangelo’s beautiful Pietà (Mary holding a dead Christ, her son in her arms after the crucifixion) was particularly memorable – though, in hindsight, perhaps not quite as significant as the first Pietà recreation at the start of the season, with Matt being held by Sister Maggie. Found at the climax of the season, the scene in Kingpin’s penthouse where Matt finally overcomes Fisk is colossal, not necessarily for its grandeur but because of the raw emotion released by Matt now that he has completed his crusade. With Daredevil doing battle with Fisk and then throwing in a seriously pissed off Bullseye, there were a lot of elements at play. We had the distinct and various fight styles of the three men, providing a striking visual, but also the culmination of a season’s character arc for each of these incredibly well-drawn characters. Fisk finally had his wife but that now about to be taken away, Bullseye knows the truth about what Fisk did to him, and Matt having to juggle putting Fisk down once and for all, his better angels, and keeping Dex from killing Vanessa, all at the same time. There’s a lot going on here and it was wonderful to watch. Matt’s guttural scream at Fisk as he finally beat him down, simultaneously frustrated that he couldn’t bring himself to kill him and furious that Fisk had brought him to such a hellish scenario was the perfect ending. Talk about intense.

SEE ALSO: Report claims Marvel’s Daredevil and Jessica Jones could be at risk of cancellation