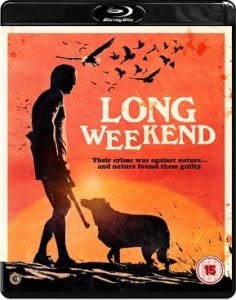 A feuding couple go on a camping weekend to try and save their marriage and discover that nature can be just as hostile as they are towards each other. 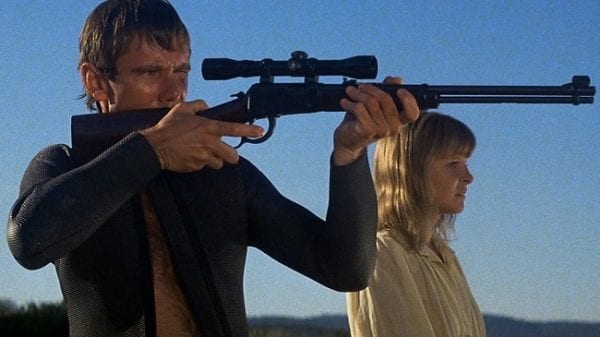 One of the unsung classics of Ozploitation cinema, Colin Eggleston’s Long Weekend finally hits Blu-ray in the UK thanks to Second Sight and what a revelation it is, regardless of whether you have seen it before or are a first-time viewer, for it isn’t very often so much can be achieved with what appears to be so little and it doesn’t do any harm to be reminded so.

Peter (John Hargreaves – Cry Freedom) and his wife Marcia (Briony Behets – The Trespassers) travel out to the wilderness for a camping weekend to try and repair their damaged marriage. Peter is keener on the idea of camping, surfing and relaxing with nature than his wife is but Marcia goes along with it anyway, and although we don’t quite know why there is so much animosity between the pair to begin with we soon get to the heart of it as every grudge and bit of bad feeling is aired over the weekend. But as the pair bicker and fight their way through the doomed trip Mother Nature steps in to take revenge when Marcia takes to killing the hordes of ants that invade their tent and Peter indiscriminately starts firing his rifle, shooting a dugong whose corpse seems to creep its way up the beach as the fiery atmosphere intensifies and the wildlife starts to turn on the invading couple.

Part eco-horror, part soap opera, Long Weekend is an odd movie in that it doesn’t have any ‘good guys’ to root for, and if this were a teenage slasher movie or a crime thriller then that would be very problematic but here it works tremendously well. Right from the outset Peter is a very unlikeable character; when we first see him he seems to be chatting flirtatiously to a woman as he goes to buy a hunting rifle for his weekend trip, and although it is never made clear who she is or whether they even know each other it just sets a tone that makes him appear a bit sleazy. Marcia doesn’t fare much better when we first meet her as she is at home on the phone talking to somebody she clearly shouldn’t be talking to, and when Peter arrives home the atmosphere is frosty straight away. Both John Hargreaves and Briony Behets act the hell out of this film, creating a pair of characters who are instantly vile and yet we aren’t put off by them, wanting to follow their journey and find out why they can’t stand each other. There are moments, of course, when they both drop their defences and almost begin to enjoy being around each other but those moments are few and far between and, it must be said, less interesting than when they are tearing strips off of each other. 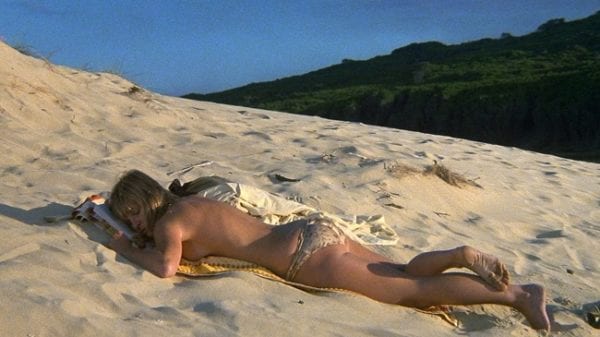 But their horrible behaviour isn’t just aimed at each other, for their obnoxious attitudes spill over into their actions towards their environment. Peter runs over a kangaroo on the way to the beach with very little regard for the creature or any damage he may have caused, both people smoke and casually flick their cigarettes wherever they please, on one occasion causing a fire, and other things they do have an effect on their surroundings, things that seem innocuous to their city-dwelling sensibilities but are devastating to the creatures around them. And none more so than the dugong that Peter mistakes for a shark, shooting the defenceless animal several times, even after it is apparently dead, although it does appear to be moving closer to the couple’s camp in an eerie metaphor of the creeping dread that is closing in on Peter and Marcia.

When we do finally get to the bottom of what made the couple fall out the symbolic nature of the filmmaking begins to make more sense – the close-ups of various critters and plants, the bird’s egg that Marcia smashes against a tree, Peter’s affection towards his dog Cricket that Marcia resents so much – and sets the scene for a final act that builds on the tension that has been expertly crafted to that point and pushes the psychological angle to the point where the paranoia set up over the previous hour is justified, although it doesn’t change where our sympathies lie. 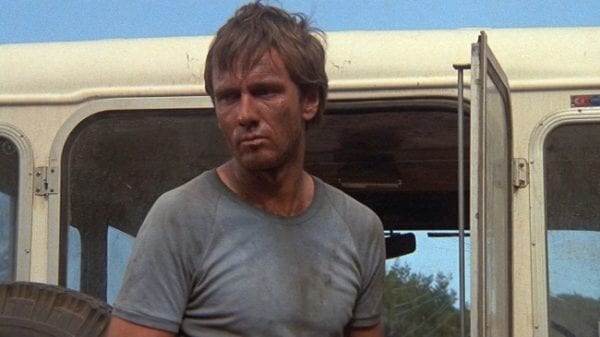 Although still quite grainy Long Weekend is bursting with colour and the photography is stunning, bringing the environment to life in another way that helps promote the feeling of nature going wild. Extras include an audio commentary from executive producer Richard Brennan and cinematographer Vincent Monton, uncut interviews from the Not Quite Hollywood Ozploitation documentary (the DVD of which is well worth seeking out), a panel discussion about the film featuring several film historians and critics that sheds an interesting light on the film, stills gallery and trailer so there is a bit of background material to delve into but the film itself is the real gem here, doing what hundreds of supernatural ghost movies have tried (and often failed) to do and that is create a genuinely creepy and unsettling atmosphere, and there are very few special effects employed to achieve it. The film never fully embraces the supernatural nor does it discount it, ensuring that the smallest of gestures has some effect and that this strange but absorbing movie still manages to mesmerise 40 years on. There is much that many could learn from Long Weekend, both filmmakers and audience alike.