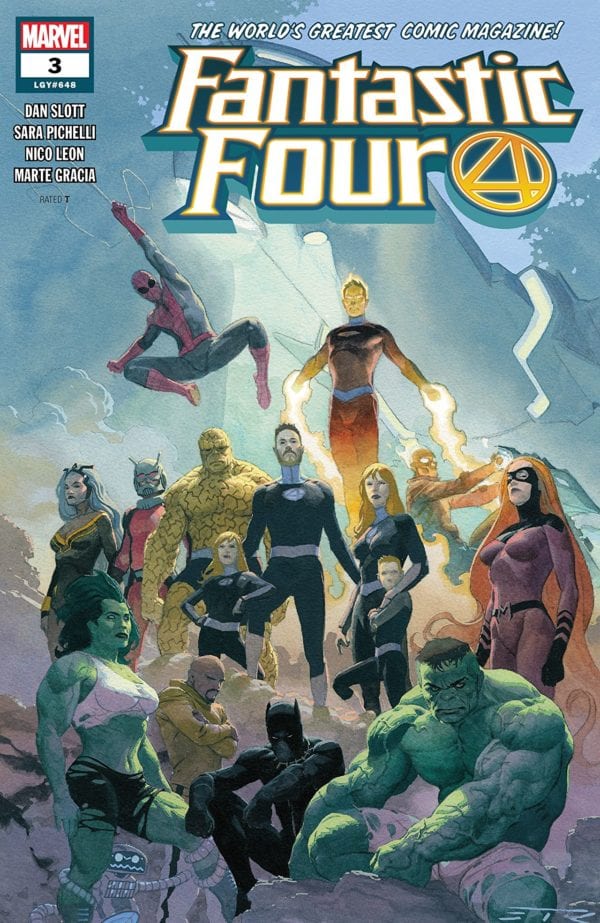 “Truly awful.” Throughout my fandom of the Fantastic Four, having read the majority of the comics in existence with that name or logo somewhere on the cover, I have been disappointed numerous times. Good ideas squandered? Check. Those are legion. Wildly off-base characterization? I see you, Matt Fraction. Ideas that were dull to begin with stretched out and beaten to death over the course of years? Oh hi, Marv Wolfman. Still, through all of that disappointment, never have those two words been the first thing that popped into my mind once I’d taken in that final panel.

So am I trying to say that this is the single worst issue of Fantastic Four ever published? Lord, no. Mark Millar used to write this book. It is simply that Dan Slott has fumbled the ball with an empty field in front of him. This was the reunion issue! It’s a month late! There was no reason to miss the target this badly. The setup came at the end of issue #2, when Reed Richards used some magic science machine to summon everyone who has ever been in the Fantastic Four to the dimension that he, Sue, and the Future Foundation were in to face off with the Griever, the cosmic embodiment on entropy. Instead of using this to delay a true Fantastic Four reunion until after the action (a typical FF trope, having an obstacle in the way of the emotional payoff), Slott opts to shoehorn the moment in the middle of battle. In a huddle, no less. A huddle.

On top of all of this, so much goofiness is injected into the book, breaking every moment where you might feel like the cosmic embodiment of the death of all things was some kind of a threat. There is even a moment where Sue eludes this cosmic god, who has no visible eyes, by turning herself invisible the moment she snags her captive son. “What? No!” exclaims the death of all things after failing to counter a maneuver that a common purse snatcher would criticize as amateurish.

Reed Richards trades confidence for a blasé attitude, treating the culmination of an encounter that has destroyed countless universes teeming with life with less seriousness than my dad treats league night at the bowling alley. It doesn’t matter to him. It’s just another encounter. So why should it matter us?

The long-awaited reunion of the Fantastic Four isn’t much of one. It was already lessened by the fact that they first share a panel together at the end if issue #2, though there wasn’t much in the way of a conversation. Then Slott shoehorns the proper reunion into the beginning, where it has no weight. We pick it back up after the yawn-inducing defeat of the Griever, only to be bombarded with dumb jokes relating to the extended team, and weird references to that time Iceman was in the Fantastic Four being “non-canon.” Iceman never was in the Fantastic Four, but Slott promises in the margins that this is an untold story that definitely happened that he’ll tell another time. Please don’t, Dan. We don’t care.

The art is beautiful, once again. Another phenomenal cover by Esad Ribić, with interiors by Sara Pichelli and Nico Leon. Marte Gracia’s colors continue make this book pop. No complaints on that front.

This is a disappointing issue, which is a big blow to Slott’s tenure very early in the game. This was one of the big ones. The next big one will be #5 (Legacy #650), featuring the wedding of Ben and Alicia, which has recently been expanded to a whopping 72 pages with an equally whopping $7.99 USD price tag. But a fumble this bad hardly makes me excited to pay double the price or carve out the time to read 72 pages. I’m still in it, though. I’ll be back here in a few weeks, keeping the faith. Slott has put together a lot of fun comics over the years, and he plans on writing Fantastic Four for many years. Here’s hoping for the best.