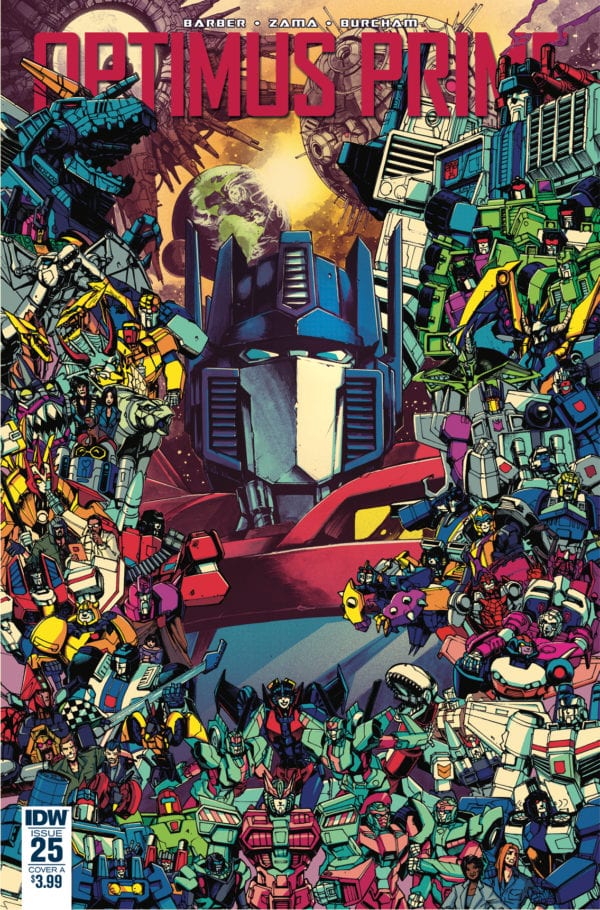 The end has come as Optimus Prime #25 serves not just as a conclusion to the series and an epilogue to Unicron, but to IDW’s Transformers continuity as a whole. Running from 2005 to now, the IDW universe has had its highs and lows while reshaping familiar elements of the franchise and putting entirely new concepts into the canon. Optimus Prime #25 offers a reflection on some of these changes as the survivors of Unicron’s attack contemplate their future and Optimus Prime’s life, both as a bot and as an ideal. John Barber sends the series out with plenty of emotion that ties up loose ends and a fairly good final deconstruction on the heroic Autobot.

The grand finale to IDW’s universe was split into two distinct stories. The first detailed Optimus’ life, from the moment of his forging to his sacrificial death while the other half caught up with everyone post-Unicron and gave them endings of their own. For the large ensemble cast, Barber wrapped up their storylines fairly well as he bounced from one character to the next. Some of the most affecting endings were with Arcee, Bumblebee and even Prowl as each of them came full circle in their journeys. Prowl’s was particularly dark as he recognized he will be remembered much like Shockwave – an uncaring monster who used others to his own benefit no matter his good intentions. With Bumblebee it was pretty humourous to see he’s now hanging out with Starscream’s ghost, both a parallel of his and Starscream’s relationship over the past few years and a reference to the original Transformers cartoon and Starscream’s ghostly fate.

The flashbacks to various points in Optimus’ life didn’t seem quite necessary at first. None of them really revealed anything new about the character or Barber’s take on him, especially since the beginning of the Optimus Prime series already devoted much of its story to Optimus’ past. However, the fact it turned out Arcee was merely telling the story of Optimus’ life to people in the future, as well as the fact the flashbacks were more of a deconstruction on how Optimus viewed himself, helped make them feel a little more integral rather than repetitive. Throughout the IDW continuity, especially on Barber’s run with him in Robots in Disguise and Optimus Prime, Optimus has been less than the heroic character he’s been throughout most other iterations. The finale issue examines the contradictory nature of his image as a heroic figure who fought for peace also was a warrior who never let anything stand in the way of his goals and is comfortable with some morally grey tactics.

It was an interesting and unique take on Optimus, but Barber really fleshed out the Autobot leader in his run by making him relatable, flawed, powerful and three-dimensional by questioning so many of his actions. As Windblade herself put it, what made him such a notable Prime and figure among them was he asked himself whether or not he was causing more harm than good to Cybertron and the transformer society. Even when he took a drastic course of action, he never presumed to know it was the right decision. The finale really focuses in on this through Optimus’ flashbacks and what the various characters think of him now that he’s gone.

As with most of the other issues in Optimus Prime, Kei Zama is on artwork and delivers some great imagery. At the start of the series, I felt her artwork was a bit rough, but she’s really grown on me since then as her comfort in Transformers has grown. Her final issue has some very evocative images, from Bumblebee walking along a beach, Orion Pax’s birth or the twisted face of Unicron. The expressions she gives the bots as they move through their sorrow is well done and quite clear. A couple images that stand out is the look of resignation on Prowl’s face during his chat with Shockwave or the quick smile as Optimus finally finds peace. Josh Burcham’s colours compliment Zama’s work as he gives the issue a lot of vibrancy to the characters and backgrounds. Zama and Burcham definitely pulled out all the stops for the finale.

Optimus Prime #25 isn’t as strong of a finale as Lost Light #25, but it still hits plenty of the right notes in its examination of Optimus’ character and the legacy he leaves behind. As the final chapter of IDW’s current Transformers universe, its thought-provoking ending on who Optimus Prime is offers some nice payoffs in its deconstruction as well as fitting conclusions to other supporting characters.