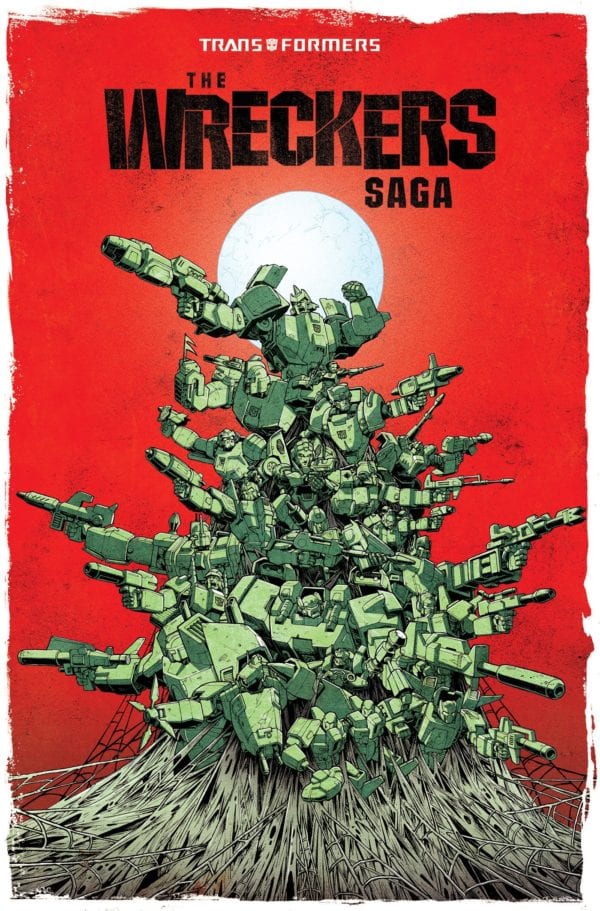 Over the years of the Transformers franchise, there have been plenty of Autobots and Decepticons who have often gotten the short end of the stick in its many iterations. Plenty of bots on both sides just haven’t been fleshed out or fully explored, leaving a lot of room for potential open to Transformers writers. That’s where James Roberts and Nick Roche came in on The Wreckers, a group of highly trained and deadly Autobots who go on near-suicide missions to defeat Decepticons. Their casualty rate is so high they have a pretty decent turnaround rate in its members. Over the course of two miniseries and one special, one of which has gone down as one of the best Transformers stories ever made, Roberts and Roche delivered some great characters with heartfelt and heartbreaking moments while expanding the lore of Transformers. Now IDW has collected all the Wreckers stories, including several prose ones, in Transformers: The Wreckers Saga, a collection that is essential for any Cybertronian fan.

Collecting The Last Stand of the Wreckers, Sins of the Wreckers and Requiem of the Wreckers, the trilogy following the group of Autobots that are sent in when things go from bad to worse in what are often considered to be suicide missions. The team is usually made up of regular Transformers characters like Kup, Springer, Perceptor and Ultra Magnus and a number of C or D-list Autobots. It helps open up the world of the Transformers even more by focusing more on the unknowns than the big guns and gives Robets and Roche a lot of leeway in how the bots are presented.

The Last Stand of The Wreckers is already considered a classic and fan-favourite tale in the Transformers lore (one that I said should be turned into a spin-off of the Transformers film franchise). Marked somewhat as the beginning of Roberts’ long run on More Than Meets The Eye and Lost Light, the story is an emotional, action-packed and powerful story that sees the Wreckers attempt to retake a prison from a rogue Decepticon warlord. This is the story that really focuses on the lesser-known bots, fleshing plenty of them out and making the story feel like a sci-fi take on The Dirty Dozen and Seven Samurai. Its got some very high-pitched battles, but one of the themes Roberts and Roche focus on is how soldiers often die needless and pointless deaths at the expense of others while exploring the morally grey area many of the Wreckers and other Autobots live in.

Last Stand was already an excellent one-off tale, but Roche returned to the characters years later with Sins of the Wreckers that follows up on some of the events from Last Stand and what was going on in the Transformers comic, such as Prowl’s rogue operations. While it is not quite as riveting as its predecessor, Sins is still an enjoyable story that again focuses on the moral ambiguity of the Wreckers’ actions, putting quite a spotlight on Prowl and how much of a manipulator he’s been. It also utilizes some other aspects of the vast mythology, pulling in some elements and characters from Beast Wars that really expand what we know about some of the characters. Though it does focus on more of the A-listers than Last Stand did, its examination of Prowl, Impactor, Springer and Arcee provide further insights into their characters and what drives them.

Rather than another miniseries, the Wreckers trilogy is instead closed off with the one-shot issue Requiem of the Wreckers, again written and illustrated by Roche. While it doesn’t quite have the same ambition of the previous two and rushes past a couple story points, Requiem delivers a fairly solid ending to the trilogy that comes full circle for Springer, Impactor and Verity. Due to the lack of room since its just a one-shot, its a much smaller cast, but Roche manages to use this to his advantage to provide a more intimate look at the characters and villains.

Not only is the trilogy well-written, but Roche’s artwork is great throughout the stories. He captures the emotions on the bots very well with every look of sorrow, anger and painful grimace. One of the most prominent aspects of each series is just how gritty it is. Transformers comics usually aren’t too violent or at least explicitly graphic, but Roche makes you feel every punch, stab and scrape with the characters. Last Stand is particularly brutal with some very vicious deaths. It really puts the stakes and villainy of its antagonist into sharp focus when the Wreckers aren’t just fighting against regular Decepticons. Josh Burcham’s colours throughout each story is very vivid and plentiful, blending together a lot of lights and darks and making each transformer visually stand out.

The reason why the book is called The Wreckers Saga instead of a trilogy is because it collects several extra short stories surrounding the Wreckers. Roberts’ short prose stories ‘Bullets’ and ‘Zero Point’ is included here as well as the short comics ‘Dead Men’s Boots’, ‘Escape’ and ‘In Words and Deeds’. Each one is integral to the story of the Wreckers by providing well-thought out lead-up to Sins of the Wreckers and Roberts’ own Transformers series.

The Wreckers Saga has so much that Transformers fans will love, from the use of unknown characters to stories with deep themes and heart. Roberts and Roche’s understanding and love of the world is clear with their exploration of these characters and the grey area of war. Much of these stories focus on how to fight in a war without losing yourself, something most Transformers stories rarely tackle in in such depth, but the pair succeed in their ambition. For any Transformers fan, it’ll be great to have the complete Wreckers adventures in one book and is a good jumping on point for anyone who doesn’t have much Transformers knowledge.