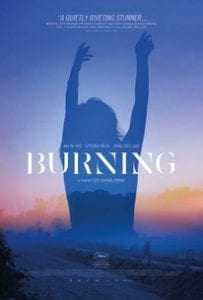 Jong-su, a part-time worker, bumps into Hae-mi while delivering, who used to live in the same neighborhood. Hae-mi asks him to look after her cat while she’s on a trip to Africa. When Hae-mi comes back, she introduces Ben, a mysterious guy she met in Africa, to Jong-su. One day, Ben visits Jong-su’s with Hae-mi and confesses his own secret hobby. 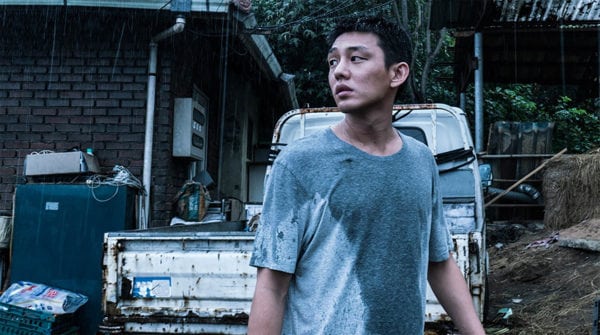 Don’t let the monstrous running time steer you away from Burning, Chang-dong Lee’s latest meticulously crafted effort (somehow this is my first time viewing one of his films, but not necessarily too surprising considering the auteur evidently likes to take his time between projects), that cleverly explores a wide variety of subjects ranging from the dark side of the male gaze, the double lives that people hide, societal class rankings, various incarnations of mental instability, and Korean political issues all wrapped up into a glacially paced thriller that, despite its snail-like crawl to its fireworks grand finale, always remains aware of the purpose and point of each and every extended sequence, whether it be a lengthy dialogue exchange or expressive facial close-ups that equally further character development.

Without wasting a moment, Burning opens with Jong-su (South Korean star Ah-In Yoo, celebrated in his homeland for his acting talent yet also a controversial figure for some allegedly misogynistic tweets, something that would normally not be relevant in the context of grading a film but actually kind of fits here for the character) reconnecting with a childhood friend, the dancing junk-raffle hostess Hae-mi (Jong-seo Jeon delivering a performance part hypnotic, part intentionally confounding as to her true motives, complete with vulnerability and a striking wisdom that adds further complexities to her character). Within the first 25 minutes or so, there is also a pair of long-winded exchanges between the two that initially seem overly long, yet tellingly important thanks to the acute direction from Chang-dong Lee. 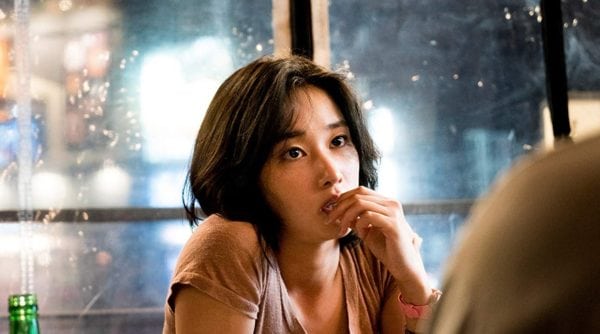 In what is some of the finest acting all year, Hae-mi pantomimes peeling tangerines while discussing the intricacies of making such a simple demonstration feel utterly real; it’s all about what one believes is there versus what they perceive to be in existence. This philosophical conversation is then carried over to her rinky-dink apartment complex room, where she instructs Jong-su on how to feed her cat while she is away on a vacation to Africa in hopes of gaining an understanding regarding the meaning of life. The kicker is that the cat, despite the litter box filling up with feces, might not even be real. Hell, from the moment she mentions that Jong-su once hurtfully labeled her ugly while they were teenagers, the audience begins to get a sense that there might be some manipulation in the works, and that this and all future events she recounts should probably be taken with a grain of sand.

Jong-su is not necessarily a likable human being either; he has aspirations to be a writer but never really does so, spending the majority of the film observing the trial for his violently hotheaded father and tending to their farmland (also his old home) in his absence. That’s all well and good, but he quickly develops an obsession (or anything but real love) for Hae-mi, jerking off to pictures of her in her apartment while he is supposed to be feeding the cat. To be fair, she is equally smitten with him (before she leaves, they have an awkward sexual encounter that suggests Jong-su might be a virgin), but nevertheless, something isn’t quite right with the process in which his feelings are manifesting. After about a month, she returns home with the Korean equivalent to The Great Gatsby, Steven Yeun’s swaggering and wealthy intellectual Ben, springing forth one of the most unsettling and nerve-shredding love triangles ever put to screen. 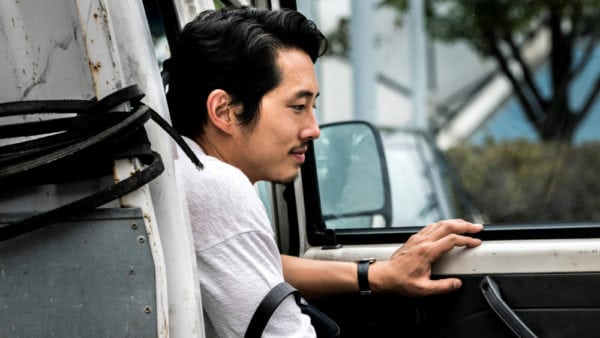 Loosely based on the short story Barn Burning from Haruki Murakami, Burning slowly morphs into an unconventional thriller where the answers are just as ambiguous as the events that unfold. However, what keeps this from never once becoming frustrating is that the script and tonal shifts constantly recontextualize prior conversations between characters. There’s not a single truthful or reliable figure in the film, and it only gets more daringly bizarre by the second; Ben confesses that he enjoys burning down abandoned greenhouses, and I’m still not sure he’s the most mentally unsound person in the film.

With that said, the introduction of this so-called hobby is far less straightforward than one might assume. Burning does contain some light political commentary (the childhood friends grew up near the North and South Korea border, subjected to propaganda from the North, also mentioning that South Korea is undergoing tough times financially for its younger generations driven home by a quick but not entirely out of place glimpse of Donald Trump on the television) expanding the meaning behind the fancying of burning these greenhouses down, but there’s also the case that Ben might be indulging in a game of misdirection. 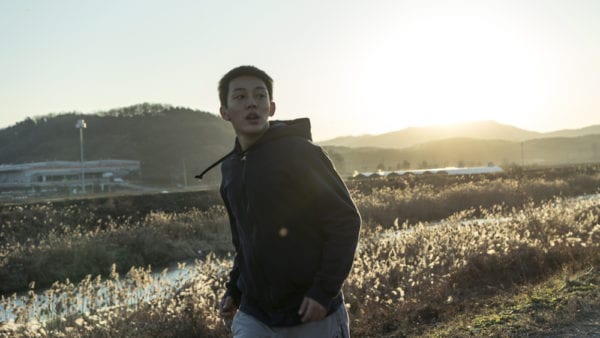 As Jong-su becomes further enamored by Hae-mi’s outward beauty (and possibly her childlike wonder and stimulating mind), he also becomes fixated on Ben’s hobby. It’s not long before he begins stalking both of them outright, especially since he is quickly losing Hae-mi as a possible love interest. This dynamic and increasing complexities of each character all transcend the thriller genre into a lyrical masterpiece. Don’t just watch the ending, seriously consider every single possibility for the reason you’re seeing what is transpiring. The worst thing anyone can do is treat Burning as a surface level mystery uninterested in explaining what really happened.

The thriller framing masks an experience far more sinister than meets the eye. Take the soundtrack from revered South Korean composer Mowg, which frequently utilizes a catchy but ominous guitar riff. The beat starts off more fun to listen to than anything, but as the story transitions further and further into depravity, the length of each time we hear the theme is extended, revealing something more haunting. Visually, the cinematography is equally fascinating, whether it be from wide-angle shots of the country or carefully composed images that reflect the character dynamics at play (some of the best representation of this appears during the aforementioned tailing segments). Again, the ending itself is a doozy, made all the more intense by its tracking shot presentation. 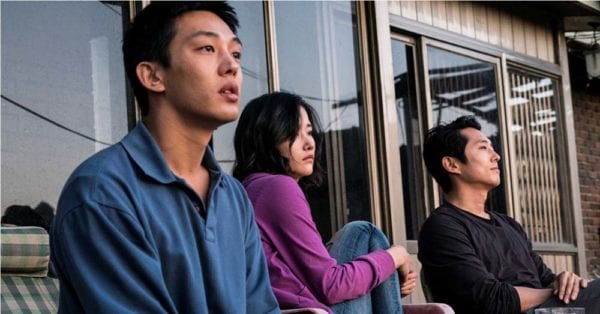 Burning does justify its beefy running time, but I also have no problem conceding that a few longer sequences could run just a tiny bit shorter, shaving off around 10 minutes or so that probably would make a huge difference for some. The sex scene runs more than long enough for us to get the point that Jong-su is both inexperienced and a loner without much social life, the topless poetic dance from Hae-mi in front of a setting sun is aesthetically stunning but a little bit self-indulgent, and not everything to do with the troubled father is particularly engaging. What’s more telling is that two of those three involve, what for some, could be perceived as a case of gratuitous nudity. Honestly, it never feels that way, but it’s undeniable that the scenes could be trimmed without losing much. Personally, I don’t really care; I was transfixed throughout the entire epic running time.

The film already redefines itself multiple times, but the ending propels this enigmatic study of three socially maladjusted individuals into an unshakable tragedy. Due to his The Walking Dead fame, Steven Yeun will receive the most attention (keep in mind, it is well deserved as he is completely mesmerizing as this entirely unreadable persona with a dark side), but none of the themes would resonate as emphatically as they do without the combined force of this trio. Neither likable nor detestable, they are fascinating psychological studies, while Chang-dong Lee’s direction finds an important use for even the most seemingly unnecessary details. Unless the auteur reveals all in an interview, debates will forever be waged over what really transpired in Burning; this is a story where we want to know more but also don’t. 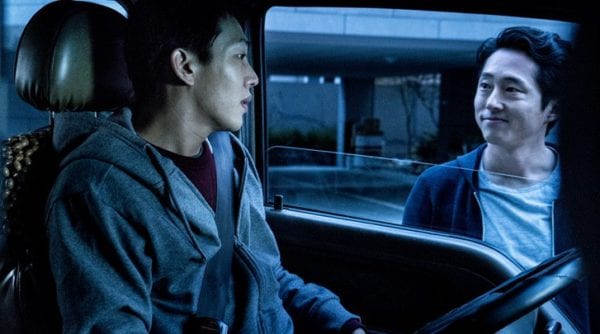 Whether one wants to take the interpretation of jilted ex-lover or a more politically conscious reading, Burning will bore the hell out of you for a long time, but never enough to make someone lose interest or tap out, before catching you in an anaconda vice when you’re at your most vulnerable. It doesn’t let go, and long, long after the closing moments, it will continue to burrow underneath your skin; taking a shower is not going to help clear your conscience. What was once boring becomes an unforgettable work of genius deserving to be repeatedly examined. However, even one viewing confirms Burning as poetically transfixing and psychologically harrowing.