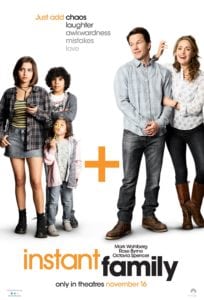 A couple find themselves in over their heads when they adopt three children. 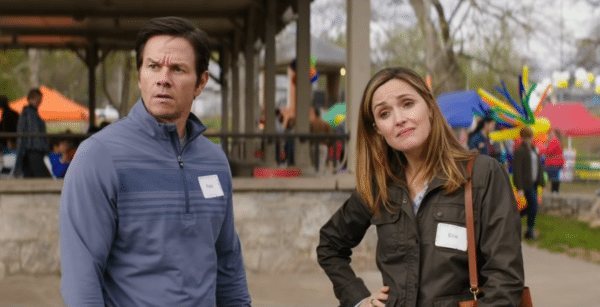 Although they share the same director in Sean Anders and could be construed as having similar storylines (not to mention the presence of Mark Wahlberg in both), Instant Family is not another entry in the Daddy’s Home franchise under a new banner. Whereas the filmmaker (working double duty writing the script alongside regular partner John Morris) is typically known for crafting crude and vulgar jokes, this is a more personal project drawing from his own experiences adopting a child within the Seneca Family of Agencies’ Kinship Center foster care system, not only mining that for grounded humor but also telling a tender and occasionally dramatic arc about a couple forming the family they never knew was missing from their lives.

Played by Mark Wahlberg and Rose Byrne respectively (the former is his usual chatterbox self with superb comedic timing, while the latter excels at both humor and charged moments defending their decision to adopt instead of conceiving naturally), Pete and Ellie are relatively happy and well-off with their occupation of renovating and flipping houses, but also kick around the idea of having children and becoming parents. They aren’t necessarily in a rut, but it’s evident something could bring them even closer together. During this conversation Pete makes a passing remark about adoption with relevance to their age; going this route would feel like they started their family at a younger age (there is also a clip before the film begins where Sean Anders talks about this exact reasoning as to why he and his own wife adopted).

What immediately sticks out while watching Instant Family is how lived in everything comes across, whether it be the numerous supporting characters that all have unique reasons for wishing to adopt, the insight as to why many of these children are in need of foster care (the film is unafraid to be blunt and real, telling it like it is hitting on elements such as drug addiction and how that kind of negligence and parental abandonment can drastically affect the mental well-being of the children, exploring that from three different impressionable ages), and the actual challenges Pete and Ellie face trying to strengthen their bond with the kids. It’s always a good thing when a director confidently talks about how his work is very personal and one’s first reaction when the credits roll is “just how much of this is real”.

The sassy and always reliable Octavia Spencer and deadpan Tig Notaro portray a couple of adoption center coworkers mixing their brands of humor to good effect but also stress the importance of not breaking up siblings. It just so has it that Pete, feeling sympathetic for the unwanted teenagers, gets a good feeling about Lizzie (Isabela Moner, who recently collaborated with Mark Wahlberg on last year’s Transformers: The Last Knight and, although was seen this summer in the politically complex and much more adult-oriented Sicario: Day of the Soldado, here is given both the most layered character of her young career so far and one of the most layered in terms of the family comedy genre) , who not only comes with an assortment of baggage but a younger brother and sister (Gustavo Quiroz as Juan and Julianna Gamiz as Lita) alongside overprotective tendencies. 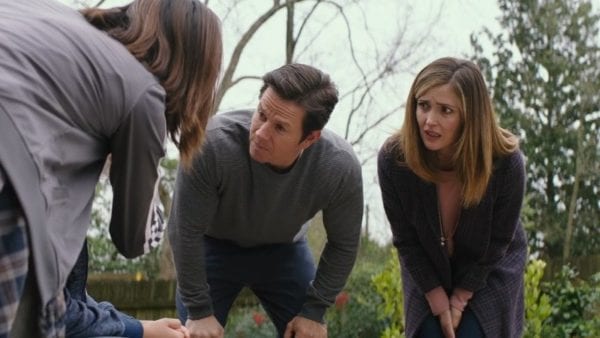 Instant Family wisely never fully settles into an overly traditional three-act structure, opting for an approach that sees the new parents trying to solve problem after problem once the proverbial honeymoon period has ended, rendering the experience comparable to comedian Bo Burnham’s recent masterpiece Eighth Grade. The only difference is that Instant Family sanitizes the details of the darker elements it touches upon, often existing in a space between PG-13 and R-rated. At the same time, despite the all-ages approach, there are a handful of moments that simply ring true and genuine, which is most certainly an accomplishment. The fact that Sean Anders is even willing to explore what is here (drug-addicted parents, abandonment and its many forms of posttraumatic anxiety, adults taking advantage of emotionally fragile minors, etc) is admirable.

What that said, it never fully breaks away from its formulaic comedy status (the overall trajectory of the narrative and ending is predictable from a mile away), and there are occasional bits of broad humor that feel as if they would work in a different kind of Sean Anders comedy. Amusing as it is, there’s a running gag about a strict and uptight white woman looking to adopt an athletic black teenager (similar to The Blind Side) that feels tonally out of place, as is a very bizarre flashback showing Pete accidentally murdering someone with a football. It’s almost as if Sean Anders is sometimes unconfident enough to trust the sincerity of the story he is telling will be enough to win moviegoers over, resorting to a few cheap gags here and there. They don’t derail the movie at all, but rather simply feel superfluous and unneeded.

Nevertheless, Instant Family never loses focus on its goal, which is to enlighten people on both foster care and the tricky roads to navigate raising such children, or any children for that matter considering some of what is tackled is applicable to all families. There may be an on-screen graphic in the ending credits explaining how one can adopt, but that’s as close as the film comes to being preachy. Drifting between lighthearted laughs and a respectable amount of serious themes, Instant Family is genuinely moving (even if the ending does get a bit too sentimental) and a conversation starter, which is not a claim many mainstream comedies can stake.