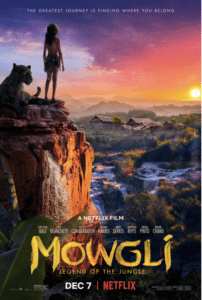 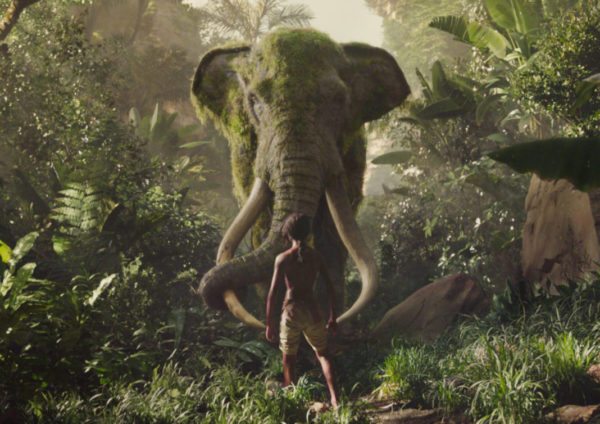 Rohan Chand stars as man-cub Mowgli, a human saved by black panther Bagheera (Christian Bale) and raised by wolves. As Mowgli grows older, his human traits become more pronounced – but that doesn’t stop the man-cub from training with his adopted pack. Baloo (Andy Serkis) encourages the boy to run like a wolf, think like a wolf, and hunt like a wolf, yet he is no such predator. To make matters worse, nefarious tiger Shere Khan (Benedict Cumberbatch) eyes the boy as an intruder. When Shere Khan’s not slaughtering cattle in an attempt to draw human conflict, he’s trying to kill Mowgli. Maybe the jungle is no place for a man-cub?

Serkis’ background as a motion capture legend surely led to his directorial selection given how Mowgli: Legend of the Jungle favors CG animals. At times a seamless blend as Mowgli rides on Bagheera’s back or fire illuminates every grey hair on the panther’s aged face, yet opening attack sequences throw villagers around leafy pixelated floors without meshing visual planes. Jon Favreau’s 2016 The Jungle Book sets the bar for live-action reinvention through digital upgrades, one that Mowgli: Legend of the Jungle stays a rung below thanks to less masked designs. A starker contrast between post-production and reality.

Warner Bros. likely had *no* idea how to market Serkis’ PG-13 revamp of a familiar classic, and can you blame them? Mowgli: Legend of the Jungle is violent and unforgiving. Wolves rain from the sky during Akela’s (Peter Mullan) mountaintop defense of Alpha status, butchered cattle rot in the sun – one of the first things Mowgli learns from Bagheera is to look your dying prey eye-to-eye so their soul does not journey onward alone. Here’s to the poor grandma or babysitter who mistakes this streamable tale for another The Jungle Book only to have small children lectured about death, sustenance, and respect in primal stages. Who else is surprised Christian Bale didn’t dust off his Batman voice for this hella dark, hella gritty reboot?

Reinvention and differentiation itself are not responsible for Mowgli’s glib rebirth, particularly in a rapid-fire Act III. It’s enduring enough as we watch Shere Kahn slice Mowgli’s arm open or count the inflicted scars of animalistic pasts on each character, whimsy forgone. Then we meet Matthew Rhys’ safari hunter who’s hired to exterminate Shere Kahn. Cue a brief sequence where Rhys’ fatherly teachings domesticate primitive Mowgli, then a blink-and-you’ll-miss assertion that he’s a raging alcoholic right into Mowgli discovering the gamesman’s trophy collection of stuffed exotic wildlife. Such is a movie stuck in limbo between children’s storytelling and vicious depictions of natural law, never defining the demographic clamoring for such a claws-out reimagining of laugh-abound memories.

Mowgli: Legend of the Jungle teaches us the importance of fear, failings of ritual, and strains of finding one’s place – but at what cost? A knockout voice cast touts minimal personality through grumbling roars while harsh life lessons would make The Good Dinosaur blush. Honestly, even after ruminating further on the topic, my mind cannot conceive who will “enjoy” watching such a dour exploration of Kipling’s inspiration. A story retold – all danger, no Disney – that’s unaffecting despite maximum intensity. This specific trial by man’s flame is not the formula nor execution that benefits The Jungle Book. Hard to think Christopher Walken’s swing-jazzin’ waltz through “I Wan’na Be Like You” wouldn’t be the oddest aspect of Kipling’s adapted cinematic canon.