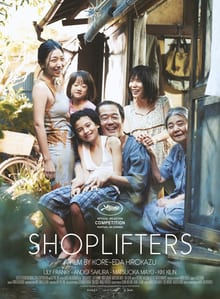 A family of small-time crooks take in a child they find on the street. 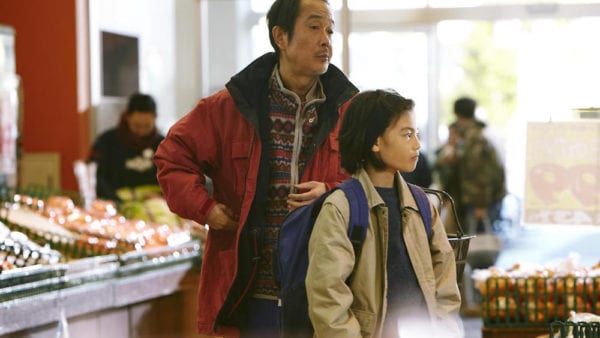 Rendering a band of criminals as likeable and empathetic without resorting to glorification or romanticizing their actions is quite the balancing act to nail. With that said, writer and director Hirokazu Kore-eda has specialized in thoughtful examinations of family over the course of his filmmaking career, that he stands out as the right auteur to not only confront the importance of bloodline in relation to familial love, but how career criminal behavior fits into that mold.

It’s best left to the viewer to connect the dots as to how all of the six individuals living off the corner of Tokyo have found one another, but Shoplifters quickly addresses that due to personal issues (satisfyingly revealed towards the end of the film functioning as one of the most delicate and successful genre shifts seen all year) and sociopolitical struggles (which is not battered into your head bluntly, but rather pleasantly given a more subtle approach in favor of the masterful character development on display), these people make ends meet by stealing necessities from convenience stores and similar establishments. Even more troubling is the fact that Osamu Shibata (notable Kore-eda collaborator and muse Lily Franky, turning in a soft and powerful performance), the patriarch of this ragtag group of rebels, has young Shota (Jyo Kairi) in on the thievery; they have hand signals and the whole routine down to a science, regardless of the store. 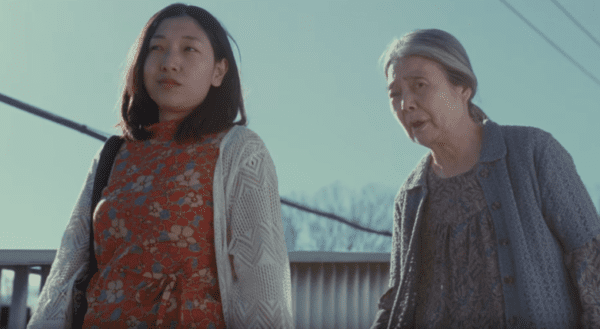 Now, before you think about picking up the phone and dialing child protective services, he and his wife Nobuyo (Sakura Andô, who is really the heart and soul of the film, given a major, breathtakingly devastating sequence) are also quick to “kidnap” a young girl off the streets with good intentions; her parents are arguing with the verbal battle seemingly poised to escalate into something physical at any moment, with the child herself clearly having visible scars all over. So they bring her in, feed her, bathe her, and generally do right by the innocent child caught up in a crummy situation that realistically, no one should ever have to endure. They may be criminals, but these are also the kind of complex individuals that instill some values into their kids, blood-related or not, rationalizing kleptomaniac indulgences as acceptable so long as the shop doesn’t go out of business and snatching a child off a balcony as justifiable so long as the intentions are fine and no one asks for a ransom. The parents don’t care anyway; it’s not a spoiler necessarily, but it takes months before the girl is reported as missing on the television.

The family also relies on grandma’s (the now deceased Kirin Kiki) pension checks alongside her daughter Aki (Mayu Matsuoka) having her body exploited as part of an in-person cam show with a mirror serving as the only thing separating customer and showgirl. Grandma simply does not want to die alone (an eerie subplot considering the actual actor passed away this year and elements of the narrative that unfold), meanwhile Aki quietly befriends one of her shy, perverted admirers. It’s certainly an unexpected direction to take the potentially seedy material, but adds more depth to the analysis of loneliness, longing for something more, and searching for the true definition of family. Shoplifters already runs a clean two hours, but these characters also feel slightly shortchanged and deserving of a little bit more attention; a certain dynamic revealed especially would be more emotional with more time. 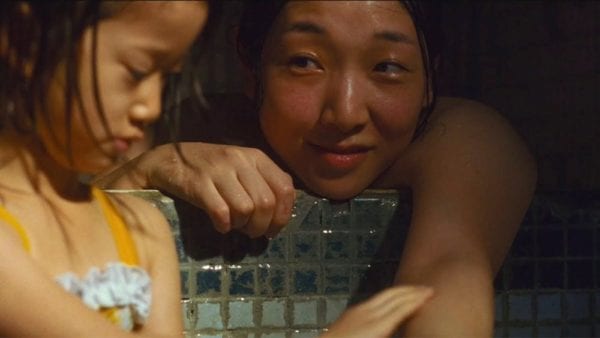 The cinematography is another highlight, as Ryûto Kondô uses claustrophobic imagery to depict just how tight and cramped the members of this household are, along with striking aerial shots of the clan watching fireworks on their balcony all side-by-side. It’s not just the script and direction that capture how loving and healthy this family is despite their flaws, but the photography allowing viewers to soak their more normal activities such as a trip to the beach. There are also certain shots that capture symmetrical abuse in poetic beauty. Shoplifters is easily one of the best looking movies of the year, and the accompanying soundtrack is also fitting for the antics and inevitable sadness that comes.

Shoplifters is a film that fires on all cylinders, but even the most superb components take a back seat to the storytelling here, albeit in a rewarding way. The final 30 minutes will tear your heart out, with the last five or so especially stomping on it for good measure, effectively driving home the complicated questions regarding family Kore-eda is posing. Competition is steep this year for awards in the foreign categories, but Shoplifters absolutely should be in the thick of the conversation. Go one step further and talk about it outside that restriction; it’s astonishing, heartbreaking, career-defining work from a masterful filmmaker.