Fathom Events and Warner Bros. are teaming up to bring the animated movies The Death of Superman and Reign of the Supermen to U.S. theaters for a special two-day event this January.

“Superman is one of the most iconic superheroes of all time, and this double feature event will give fans an opportunity to come together to celebrate the franchise,” said Tom Lucas, VP of Studio Relations at Fathom Events. “We are excited to partner with Warner Bros. again to bring back The Death of Superman and introduce fans to Reign of the Supermen.”

“Warner Bros. is proud to join forces with Fathom Events to culminate the year-long celebration of Superman’s 80th anniversary with a double-feature big screen presentation of The Man of Steel’s most heralded adventure,” adds Mary Ellen Thomas, VP at Warner Bros. Home Entertainment. “The Death of Superman was a monumental moment in comics history, and these films – expertly produced by Warner Bros. Animation and DC – capture the enormity of that story in terms of both action and emotion. Seeing both films, on the big screen, gives the fans another vehicle to unite and celebrate this beloved superhero and this landmark tale.”

SEE ALSO: DC animated movie Reign of the Supermen gets a trailer

The two films will screen across the United States on January 13th and 14th 2019, ahead of the digital release of Reign of the Supermen on January 15th 2019. Reign of the Supermen finds Earth’s citizens – and the Man of Steel’s heroic contemporaries – dealing with a world without Superman. But the aftermath of Superman’s death, and the subsequent disappearance of his body, leads to a new mystery – is Superman still alive? The question is further complicated when four new super-powered individuals – Steel, Cyborg Superman, Superboy and the Eradicator – emerge to proclaim themselves as the ultimate hero. In the end, only one will be able to proclaim himself the world’s true Superman. 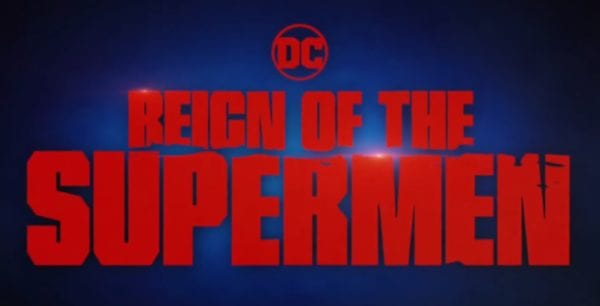