All the Creatures Were Stirring, 2018. 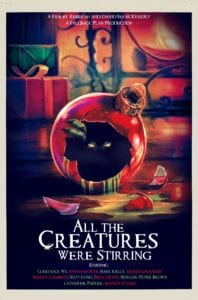 When an awkward date on Christmas Eve leads a couple into a strange theater, they’re treated to a bizarre and frightening collection of Christmas stories, featuring a wide ensemble of characters doing their best to avoid the horrors of the holidays. From boring office parties and last-minute shopping, to vengeful stalkers and immortal demons, there’s plenty out there to fear this holiday season. 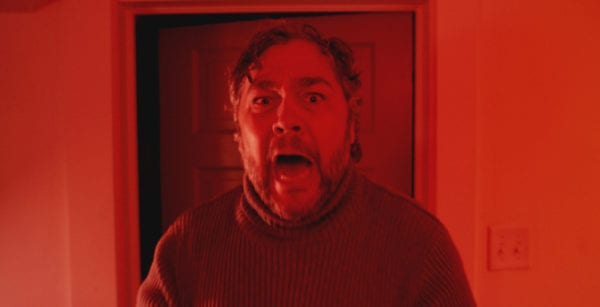 It’s surprising. I’ve crossed off nearly one hundred – yes 1-0-0 – Christmas Horror watches in my lifetime, but only two dedicated anthologies exist in this chilly subgenre. A Christmas Horror Story, which is near and dear for William Shatner’s shock-jock radio personality alone, and some wretched drek titled Psycho Santa. I love a good horror anthology – *especially* Xmas themed – so you’ll understand my excitement when David Ian McKendry and Rebekah McKendry announced their feature debut All The Creatures Were Stirring would add another title to the above list. A low-budget watch nestled snugly between the highs of A Christmas Horror Story and the unfathomable lows of Psycho Santa.

We jump right into Max (Graham Skipper) and Jenna’s (Ashley Clements) Christmas Eve meetup – a first date – since neither has plans. Max snags tickets for an arthouse theater production called “All The Creatures Were Stirring,” which comes with no description. As we can assume, this is our wraparound. Two unsuspecting acquaintances, an on-stage “director” who changes each title card, and three performers who begin acting out the short we’re about to transition into with minimalist value. Somewhat charming as red streamers represent blood, wackier than it is scary.

First up is “The Stockings Were Hung,” which makes use of White Elephant gift exchange rules at a workplace holiday party. Yuletide Saw, where prizes range from homemade Balsamic Vinegar to a gunshot-rigged box. The likes of Matt Mercer, Jocelin Donahue, Jesse Merlin, and Chase Williamson take turns unwrapping planted “presents” while a madman speaking through their office phone system spectates from safety. Drama, panic, and toxic inhalation ensue. 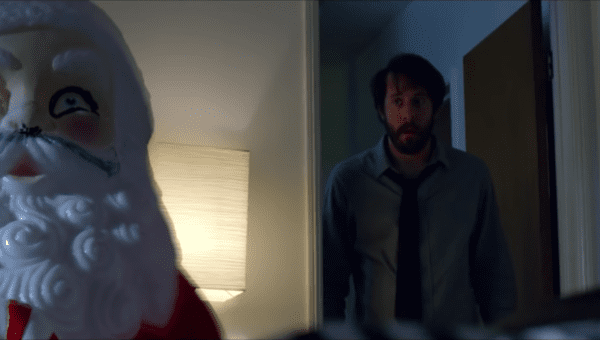 Points awarded for concept since even movies titled Secret Santa haven’t rigged such a dangerous game, but execution is lax. Due to the segment’s brief running time, we dive right into office-bred boiling points between characters like cubicle crushes and water cooler gossip. Effects struggle – why, in a room so tiny, does the poison gas not kill *everyone* instead of a single victim at one point – and in underwhelming fashion, the camera cuts away right as payoff mob-rule hits. Not wholly unexpected, still disappointing.

The above outcome would set a “halfway there” trend that hinders All The Creatures Were Stirring.

Next comes “Dash Away All,” which chronicles a last-minute shopper’s bad luck. It’s the most sharpened edge of the anthology’s many sides, delving into – for lack of spoilers – a twisted curse explained by two women in a van. Enjoy genuine surprises, stellar creature makeup, and a leading performance that’s just as perplexed as audiences are by the coy damsels. They’re surely hiding *something* in their cluttered vehicle, and finding out “what” is the film’s greatest reward.

Offering number three is titled “All Through The House,” quickly classifiable as a modern Ebenezer Scrooge update without anything new. Holiday miser Chet (Jonathan Kite) rails drugs, tries to convince his hookup to ditch her parents, and encounters three ghosts who show him a more rewarding life. Kite is playing this one wholly for laughs – no horrors – which makes the storied rehash into more of a sluggish chore than it should be. Even with Peter Cilella’s jolly neighbor blinding Chet with his red-and-green light display and cheerful spirits. Forgettable and not as funny as it hopes to be.

Following a brief intermission – Max keeps ducking Jenna to make phone calls – we come to “Arose Such A Clatter.” Hands down my favorite idea for a Christmas Horror short, and also hands-down the most disappointing entry. Plain and simple: Guy (Mark Kelly) accidentally kills Blitzen while driving home and Rudolph seeks bloody revenge. Sound like midnight masterpiece material? Not on this budget, unfortunately. Instead of gnarly creature effects, Rudolph “lives” through a few super-zoom shots on a plush reindeer half-face, red-tinted POV camera work, and actors holding gut-stabbed antlers. Not to mention some choppy editing and angular camera tricks that fail to sell Rudolph’s revenge.

Last up – before Max and Jenna’s wrap-around ends with a ghoulish grin – is “In A Twinkling,” which pits Steve (Morgan Peter Brown) and Gabby (standout Constance Wu) against a sci-fi Christmas dinner out of Black Mirror or The Twilight Zone. Gabby thinks she surprises Steve with a festive party, but instead finds herself sucked into a nightmare Steve relives every year. A black-and-white nightmare with no exit, glitching replicants in the form of feasting friends, and odd lines of questioning all about Christmas traditions. Imagine if aliens abducted the same man once a year to get to the bottom of what Christmas is all about. That’s “In A Twinkling,” which – for a second – teases a werewolf/Christmas Horror crossover I now so desperately crave.

The issue for most is going to be how low-budget All The Creatures Were Stirring looks and feels. “All Through The House” and “In A Twinkling” rely on CGI’ed evil entities, and performances across the board aren’t all on Wu or Skipper’s level. You’ll need an appreciation for barebones, debut-level work with massive budgetary restraints made evident in each short. Cinematography not always crisp as a cold December night, ideas often more appealing than means to achieve killer sleigh-pullers, alternate realities, and boardroom torment.

Truthfully, without “Dash Away All,” All The Creatures Were Stirring would be a *hard* recommendation. As is, it’s still better saved for genre aficionados who’re familiar with the Los Angeles collective who bring indies such as this one to life. It’s rough around the edges – think a Christmas gift loosely wrapped in newspaper – but it’s assembled with passionate genre respect, and that core heartiness shines through at times. Not everyone’s mug of bargain brand cocoa, but Christmas Horror die-hards searching for new nightmares this December wouldn’t be worse off for at least *trying* the McKendrys’ collection on VOD/DVD now, or streaming via Shudder next week.