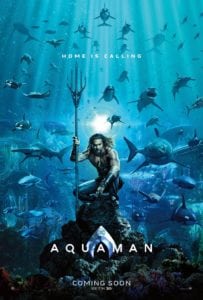 Arthur Curry learns that he is the heir to the underwater kingdom of Atlantis, and must step forward to lead his people and be a hero to the world. 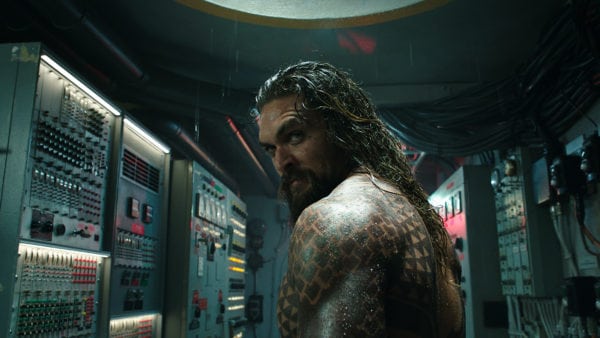 Aquaman contains a one-on-one gladiator-style battle underwater and surrounded by lava. An octopus is also on the drums hyping up the fight. That’s not even the craziest image in this aquatic adventure, which often feels as if Star Wars and the video game franchise God of War are being smashed together.

Director James Wan is commonly known as a horror maestro, giving life to such long-lasting series such as Saw and Insidious before creating a cinematic universe of his own with The Conjuring, but his main source of inspiration here (besides the comic book source material) seems to be his one-off experience helming an entry in the outrageously cartoonish Fast and the Furious franchise. Call it great filmmaker intuition if you want, but the script and story from Wan, DCEU overseer Geoff Johns, David Leslie Johnson-McGoldrick, and Will Beall is self-aware that these origins along with Aquaman’s superpowers (he can communicate with marine lifeforms and swim really fast aside from the standard cool abilities such as superhuman strength) are inherently silly, and that it would probably be near impossible to whip up something as emotionally resonant or culturally significant as Patty Jenkins’s Wonder Woman.

It’s probably why much of the introduction is rushed through, which sees the Queen of Atlantis Atlanna (Nicole Kidman either de-aged or having gone through an elaborate makeup process) out of the ocean saved by a Maori lighthouse keeper; they grow close even though they are of two different worlds, and conceive Arthur Curry/Aquaman. Their romance bookends the film and hardly feels developed leaving so many unanswered questions, but in its basic structure also gives the rest of the characters relatable motivations. It’s not long before foot soldiers in high powered sci-fi gear come knocking on their door and disrupting the peace, forcing Atlanna to go back underwater and fulfill other commitments, promising that she will return one day, but is separated from Arthur who still has his biological father and a trainer played by Willem Dafoe entrusted to him to teach them the ways of Atlantis. 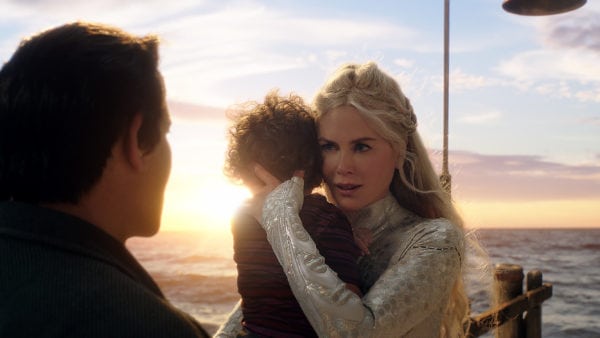 Picking up one year after the events of Justice League, Aquaman (Jason Momoa once again providing both muscles and humor as the mixed-race superhero now going up against villains ranting about pureblood and who is truly fit to be king) is still reluctant to return to Atlantis and rightfully take his place as King, but here he doesn’t have much of a choice if he wants to keep peace between land and sea, or surface dwellers and Atlanteans. Frustrated by the increasing amount of damage humans are doing to the ocean, but mostly because he’s a power-hungry stereotypical comic book villain, King Orm (Patrick Wilson, a frequent collaborator of James Wan who is absolutely game here to go blonde and ham it up villain style) is attempting to unite the seven kingdoms to declare all-out war on the world above. Not surprisingly, much of what drives the half-brothers is the tragic fate of their mother, which I will not spoil.

Then again, Aquaman cares far less about its narrative than one might assume, often interrupting dialogue exchanges with random explosions that spur characters into their defensive positions. Consider it James Wan’s method of transferring the art of the jump scare to mainstream blockbuster filmmaking, but however you feel, there’s no denying that he wants to give this tentpole propulsive momentum. Thankfully, he also wants to make the proceedings look damn good, employing cinematography and art direction so refreshingly stunning exceptionally making use of visual effects that if the movie had screened in time, I would have voted for it in multiple technical awards categories for the CFCA awards. Pardon the cheesy expression, but really do soak in the visuals during the initial journey into Atlantis, complete with all sorts of marine wildlife, sunken architectural beauty, vibrant colors, and futuristic devices. Not only is it Star Wars under the sea, but when you have stunning sights such as major characters clanging their weapons against one another while on top of a Greco-Roman reminiscent underwater statue as the camera continuously pulls back to capture more unbelievable scenery in the shot, it’s easy to forget about the fact that you don’t really care why these people are fighting.

There is more than just striking imagery going on though, as the majority of these scenes begin with some on-land establishing shots only for the camera to slowly submerge under the sea, subtly reminding audiences that this is an entire imagined world and economy right underneath our feet. It’s a repeated creative decision that adds more immersion than possibly even intended. The fight choreography is also outstanding, tracking complex character movements as the camera floats around in circular motions alongside acrobatic bodies twisting midair. From the moment Nicole Kidman kicks some ass, there’s the sensation that from an action standpoint you are in good hands. Quickly, things evolve into a relentlessly entertaining visual spectacle. The final battle alone resembles a graphic novel and is a stunning accomplishment, evoking the kind of fitting visual flair Zack Snyder was never really able to work into the universe. It’s also important to note that roughly 90% of the film was shot using IMAX cameras, so definitely seek this one out in that format.

Also, for as conventional as the story is, there are moments where the razzle-dazzle is piled on so thick, that by association there are some rewarded emotional touches. Pretty much everyone knows that Princess Mera (Amber Heard playing the fiery redheaded warrior betrothed to the aforementioned madman King Orm) becomes Arthur’s love interest, but the filmmakers aren’t afraid to extend the running time with an extra subplot or two so they can better come to understand one another. For all of the beauty found in Atlantis, there is also a few wild set pieces during a segment in Italy that sees one of Aquaman’s newly made enemies (Yahya Abdul-Mateen II portraying a smaller villain that will apparently grow in importance over time) trying to enact some morally debatable revenge after having made a deal with Orm. The film makes it a point to drive home that land and sea are one and the same, and from this movie, we can certainly tell they are equally beautiful. By the way, Mera is more than a gorgeous prop, receiving incredible utilization of her powers here and even comes to Arthur’s aid at one point. 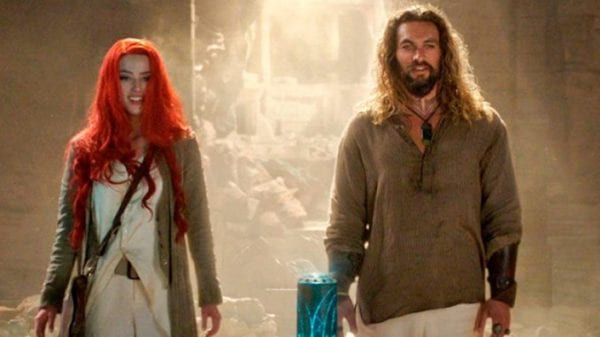 Aquaman also has some unabashed weirdness to it; the superhero is on the hunt for a legendary golden trident and as one would expect, there’s a lot of craziness to fight on the way, not to mention an encounter with a Leviathan voiced by the original Mary Poppins Julie Andrews (how bizarrely neat that the sequel to that classical music from the 60s opens the same weekend as this). Honestly, just forget everything you know about Aquaman. Sure, the basic source material is honored and so much of the plot is either cliché or stupidly predictable, but this is a visual feast for the eyes, an underwater epic that benefits from increasingly becoming more mental as it goes on. James Wan has gone off the deep end and is far from the shallow now.