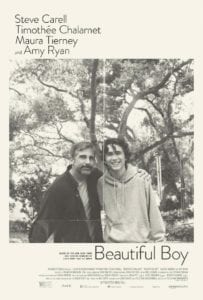 Based on the best-selling pair of memoirs from father and son David and Nic Sheff, Beautiful Boy chronicles the heartbreaking and inspiring experience of survival, relapse, and recovery in a family coping with addiction over many years.

The marketing for the latest movie from Belgian filmmaker Felix van Groeningen (The Broken Circle Breakdown) aggressively positioned it as one of 2018’s most “awards-baiting” prestige season projects, and though both the script and direction certainly falter in that regard on occasion, Beautiful Boy still succeeds on the strength of its magnificent central two-hander.

The film’s stirring opening scene sees New York Times writer David Sheff (Steve Carell) visiting a college professor to enquire about the effects of crystal meth use. At this point a series of fragmented flashbacks detail the struggles of David’s son Nic (Timothée Chalamet) with substance abuse, and with Nic now appearing to relapse in the present, David has to make a tough decision about his son’s future.

At its core, Beautiful Boy is a fairly familiar addiction drama following a narrative road-map you’ve likely seen dozens of times before, albeit spliced up here into a sometimes-effective, sometimes-awkward back-and-forth between time periods.

What does differentiate it from similar films is its frank insights into the difficulty of being a parent to a drug addict, namely the ease with which David and his new wife Karen (Maura Tierney) enable their son’s addictive ways by subtly pressuring him to resume his “normal” life as soon as possible.

And moreover, when it comes to navigating the difficult path of helping their boy, the pair wrestle with the seemingly paradoxical finality that drug addicts truly need to help themselves first and foremost.

These nuanced dramatic bombshells are admittedly peppered between some more expected truisms, with Van Groeningen and Luke Davies’ prosaic script often feeling a little too much like an anti-drug PSA, entirely unaided by some intensely obvious musical choices throughout.

The movie restrains itself for all of five quiet minutes before doling out the slow-build alt-rock designed to make you Feel, while Nirvana’s “Territorial Pissings” is jarringly used to juxtapose two distinct yet equally intense moments in Nic’s life, and an almost comically overwrought 10-minute assault of orchestral wailing damn-near derails the brutal end-sequence.

Also familiar yet to decidedly more rewarding ends are the performances from the film’s top-shelf cast. Carell has of course pivoted successfully into serious dramatic fare in a big way in recent years, and while his impressively subdued work here is probably a touch too slight for awards consideration, it’s among the very best performances of his career. Bar one screaming scene where he sounds just a tad too much like Michael Scott, he has successfully shaken the funnyman label beyond any doubt. Chalamet, fresh off a well-earned Best Actor Oscar nod for Call Me by Your Name, gives a remarkably authentic portrayal of drug addiction as anyone who’s observed the behaviour in reality can likely confirm. The skittishness, the easy deceit and even the physical ticks all feel real without getting too showy as though prepped for the sake of a future awards reel.

That’s not to forget the supporting players rounding out the cast; Maura Tierney and Amy Ryan do fine, understated work as a thankless wife and thankless ex-wife respectively, while Andre Royo briefly appears as Nic’s NA sponsor and gets to share a quick scene with his fellow The Wire alum Ryan, and Timothy Hutton shows up for a single splendid scene as the aforementioned professor.

Some will certainly find Beautiful Boy too pat, too repetitious and – at a full two hours in length – certainly too long, but Carell and Chalamet mine plenty of anguished human honesty amid the project’s sometimes-cloying writing and direction.

Heavy-handed and didactic in places, yet propped up by splendid performances from Steve Carell and Timothée Chalamet.