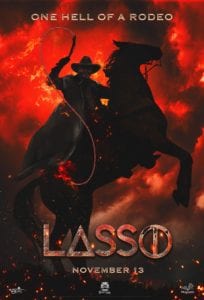 Hackett’s Rodeo is a backwoods tourist trap with animal activists, stoic cowboys and old fashioned attractions. When a busload of senior citizens turn up to sample the pleasures of traditional rodeo entertainment, little do they know that something sinister lurks in the dark threatening their existence.

This by the numbers rodeo slasher has a strong central performance from Sean Patrick Flannery as a one armed hard ass, while Lindsey Morgan proves resourceful as the heroine slash scream queen in residence. However Andrew Jacob’s latent love interest does barely anything alongside a selection of thinly drawn stereotypes who make up the numbers. Director and co-writer Evan Cecil does little to make Lasso stand out from a sub-genre which has become increasingly overcrowded. It is saved however by the commitment of a cast who portray misfits, miscreants and malodourous archetypes whilst still managing to keep things ticking over.

Flannery plays the put upon hero with gusto spitting dialogue in growls of malcontent waging war with a missing arm and for the most part winning out. Morgan is striking, sassy, commanding but never plays it completely straight. These dead eyed cowboys take turns in branding, butchering and disposing of the unwary without batting an eyelid, while inevitable clichés begin piling up. Resilient pensioners pull switchblades from a hairbrush, people are blinded by embedded horseshoes and meat hooks feature prominently in execution style set pieces.

Atmosphere plays a large part initially in building up that sense of foreboding even though the threat itself remains suitably ambiguous. Bloodletting is rife and mostly done off camera to save one suspects on budget, although in the main this never detracts from Lasso as a whole. Dialogue is sparse but since a lot of the film involves cowboys cracking whips and administering unspecified punishment for no discernible reason this works quite well. Character development is also somewhat thin on the ground as people are choked, decapitated, bludgeoned or pummelled often simultaneously leaving little room for dramatic downtime.

In many ways Lasso fulfils its aim which is to entertain whilst satisfying the slasher aficionado and tying everything else up in a neat bow come the final credits. It will win no awards for originality but you sense that was never really the intention. Flannery and Morgan equip themselves well considering the material on offer, but ultimately Lasso only ever really gets the job done rather than setting the world alight.