A mysterious young woman named Hester Shaw joins forces with Anna Fang, a dangerous outlaw with a bounty on her head, and Tom Natsworthy, an outcast from London, to lead a rebellion against a giant predator city on wheels. 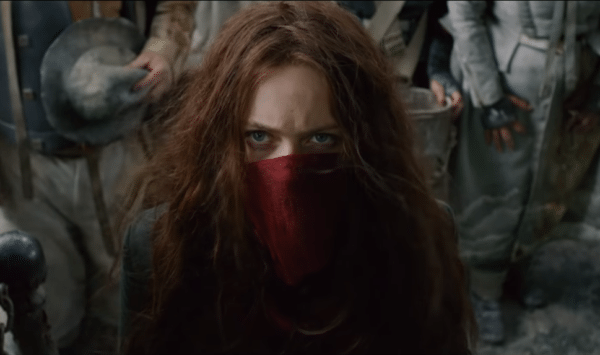 If this Peter Jackson-produced fantasy epic adapted from Philip Reeve’s hit 2001 novel has been on just about every betting man’s list of 2018 box office duds, one at least hoped that the quasi-doomed project might transpire into a decent enough YA jaunt.

Sadly, even with the promise of a script from the Oscar-winning trio behind The Lord of the Rings: The Return of the King – Jackson, his partner Fran Walsh and Philippa Boyens – Mortal Engines settles at almost all times for a listless, thrown-together melange of genre tropes while leaning back on its (admittedly fantastic) visual effects.

The movie takes place in a post-apocalyptic wasteland where Earth’s surviving denizens mostly reside on mobile “traction cities”, colossal, lumbering vehicles which frequently battle one another for resources.

A low-class London resident, Tom Natsworthy (Robert Sheehan), has his life changed forever when he inadvertently interferes in fugitive Hester Shaw’s (Hera Hilmar) assassination attempt on enterprising industrialist Thaddeus Valentine (Hugo Weaving). After both Tom and Hester are ejected from the roving city, they must band together with a team of unlikely revolutionaries to strike back against the villainous Valentine. If Mortal Engines has anything going for it, it’s that strong initial promise, established with a dizzying, breakneck opening set-piece, realising both the strong effects work of Jackson’s own VFX house Weta Digital and a relentless score from Mad Max: Fury Road composer Junkie XL.

The potential for large-scale world-building is massive here, and though the film has a certain epic sprawl to it throughout, Jackson et al.’s script paradoxically keeps things firmly grounded, bogging itself down in comically over-familiar, overwrought, scarcely coherent fantasy plotting.

The usual collection of tropes are here in soul-sapping abundance – the hero with daddy issues and the shoehorned romantic subplot to name just two – made worse by the highly expository delivery method. Though there is a decent amount of showing in the movie, it’s ultimately overpowered by the tiresome surplus of telling.

And the mixed bag of performances doesn’t much help; Icelandic actress Hera Hilmar has Hester’s determined grit down pat but is saddled with feckless material, while co-star Sheehan gives a fairly flat leading man turn. Hugo Weaving offers up plenty of hamming-for-the-rafters promise as the Big Bad, but he sadly gets precious few opportunities to really swing for the fences. The easy standouts are meanwhile South Korean singer-songwriter-actress Jihae as butt-kicking resistance member Anna Fang, and Stephen Lang as Hester’s undead cybernetic protector Shrike. Even they, however, can only do so much to elevate a fundamentally wonky narrative framework.

Though first-time director Christian Rivers – who has worked as a storyboard artist and effects supervisor on most of Jackson’s films – acquits himself not-horribly, the action sequences are clearly in need of a more experienced touch, given the abundance of rapid-fire editing and consequent spatial incoherence. When Rivers actually decides to hold on a vertiginous shot of an airship soaring through the air, though, the film looks positively majestic.

But of course, Mortal Engines‘ genuinely brilliant visual effects have a low ceiling placed on them by the soulless drivel that passes for a plot and the utter lack of joy with which it’s fired through. Unless you’re a fan of the source material or can derive some ironic thrills out of gone-off tropes being recycled this aggressively, this is strictly an all-sizzle, no-steak affair.

Visually stunning yet thunderously dull, Mortal Engines squanders its Mad Max-for-teens hook with an over-serving of generic YA slop.