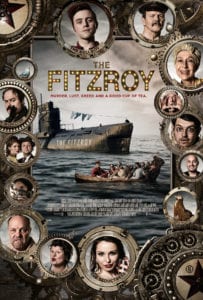 In a post-apocalyptic 1950’s, a bellboy struggles to keep a converted submarine fit for use as a hotel whilst trying to cater to the whims of a tyrannical boss, a femme fatale and various other bizarre guests.

The Fitzroy is a very quirky comedy, featuring a setting and style that harkens back to the Ealing comedies of old. Set in the 1950’s, this hotel is actually a disused Soviet submarine that has somehow ended up at Margate. It is here that we meet the protagonist Bernard (Flinn), a bellboy who spends his days trying to maintain the hotel, avoid his bully of a boss (Schall) and summon up the courage to speak to one of the guests, a seductive singer who’s fallen on hard times (Anderson).

This setting is the Britain of old, what with rationing and being closed off from the rest of the world. It brings to mind the story of how Britain was during World War II. However, this isn’t the brave Britain of old. It’s a paranoid, lost Britain that’s struggling to stay afloat. The prescience of such a setting is not lost. Even if it is, according to director Andrew Harmer, admittedly accidental. 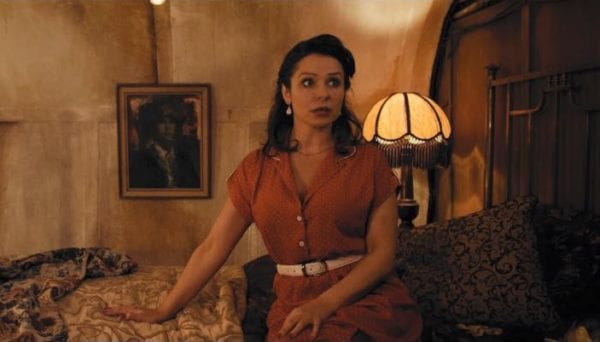 This image of ‘traditional Britain’ is purposeful, however, and the somewhat gentle stylings of comedy are prevalent throughout, with laugh out loud moments every so often. The idea that hotel guests pay in tea, and that upper-class guests even have the rare form of payment in the form of Darjeeling, is, once again, a very quirky idea of what might happen in Britain if things really did go pear-shaped. Darker comedy in between the slapstick, guffaws and awkwardness is also present, where the film reveals a little bit of its League of Gentlemen DNA.

Unfortunately, most of the characters are a little one-note. Bernard stumbles and bumbles his way through proceedings and the quirky guests and fellow staff all fall into the same behaviours throughout. The femme fatale, a singer who is forced to sleep with the hotel co-owner in order to get a room, is about as complex as it gets. This quirkiness extends to the soundtrack as, a little like Gore Verbinski’s Rango, a scraggly band literally plays along whilst staying in their own room.

Overall, it’s an interesting debut feature that perhaps starts to meander in its final third after a promising set up. Apart from the oft-mentioned quirkiness, it can be quite dark in places and features character interactions that should bring a smile to the face. One for the curious to try.