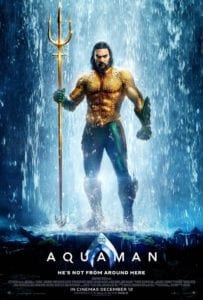 The bastard son of a human fisherman and Atlanna, Queen of Atlantis (Nicole Kidman), Arthur Curry (Jason Momoa) must return to an underwater realm that has shunned his lineage since birth, to stop an uprising that threatens worlds above and below the tide line. 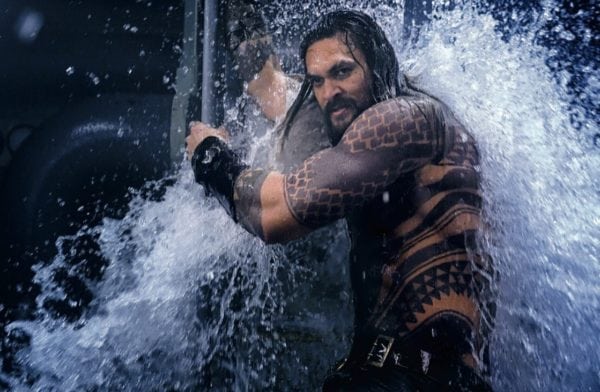 It’s a good thing Jason Momoa’s trident wielding, tat-laden superhero is a confident son-of-a-fish, because there’s a lot riding on Aquaman. Sandwiched between the triumph of Wonder Woman, and the unmitigated disaster of Justice League, with rumours circulating of a DC hard reset, one of the shining lights of Zack Snyder’s underwhelming ensemble must emerge from the surf with the fate of not only Atlantis, but this cinematic universe on his broad shoulders.

The question as to whether Aquaman is a damp squid (intentional malapropism), or the best DCEU film so far, can be put to the sea bed early on in this appraisal, along with any more aqua puns, because James Wan’s bonkers blockbuster lands somewhere in-between the best and worst of this series of films. It’s a kaleidoscopic exercise in comic book rock n roll, which veers from the silly to the sublime. Wonder Woman’s crown is safe, but you’ll still have fun if the prospect of Willem Dafoe riding a great white shark, or Nicole Kidman slurping down a goldfish, is what you consider value for money.

The prologue is strong, with Nicole Kidman revelling in the chance to take down some Atlantian guards in a stylishly executed action sequence, but then she disappears and the film begins to flounder. Characters pop up with little or no introduction. There’s a clunky submarine set-piece that introduces the film’s main villain, as well as rushing the arrival of its titular hero. It’s perhaps fitting for a film set largely underwater that there’s no time for the story to breathe. Whereas Wonder Woman showed you the history of Themyscira, Aquaman chooses intermittent exposition dumps to create this world. 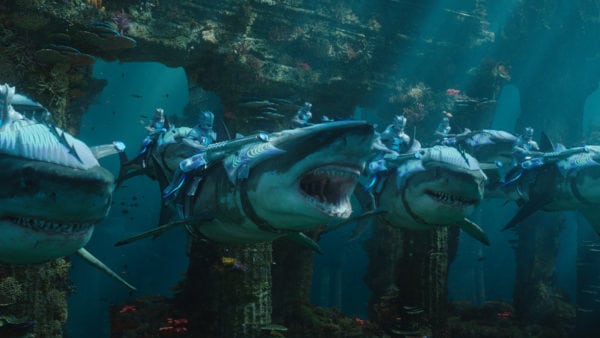 The same applies to the character of Arthur; instead of building on his scene stealing Justice League introduction, a lot of his personality, beyond the wisecracks, is informed by flashbacks and voiceover.

There’s a noticeable uptick in quality when the story moves away from the hammy Shakespearean elements of Atlantis, pitting Arthur and Mera on an Indiana Jones style expedition to find an artefact. It allows the film to start working in sync with Momoa’s charisma by not taking itself too seriously. His easy chemistry with Heard (who’s completely fine as the headstrong Mera) is welcome relief from the jellyfish sting hallucinogenic CGI visuals.

On which, James Wan, who has spent the best part of his career expertly skulking in the shadows of The Conjuring Universe, takes advantage of the new colour palette at his disposal and paints a world that exists somewhere between Avatar’s Pandora, and Otoh Gunga, the underwater city from The Phantom Menace. It’s see-it-on-the-biggest-screen-possible stuff, with things going on in every corner of the frame, all orchestrated by Rupert Gregson-Williams’ heroic score. If the plot sometimes feels a little shallow, then distraction can be found in the depths of the stunning Aquaman aesthetic. 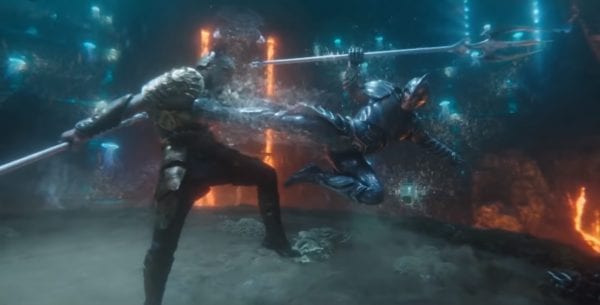 At times this is an absolute blast, but equally a bewildering bore, that ultimately works because you can’t help but admire the ambition of Wan’s aqua marina vision, the strong eco-message, and Jason Momoa’s enthusiastic buoyancy aid performance.