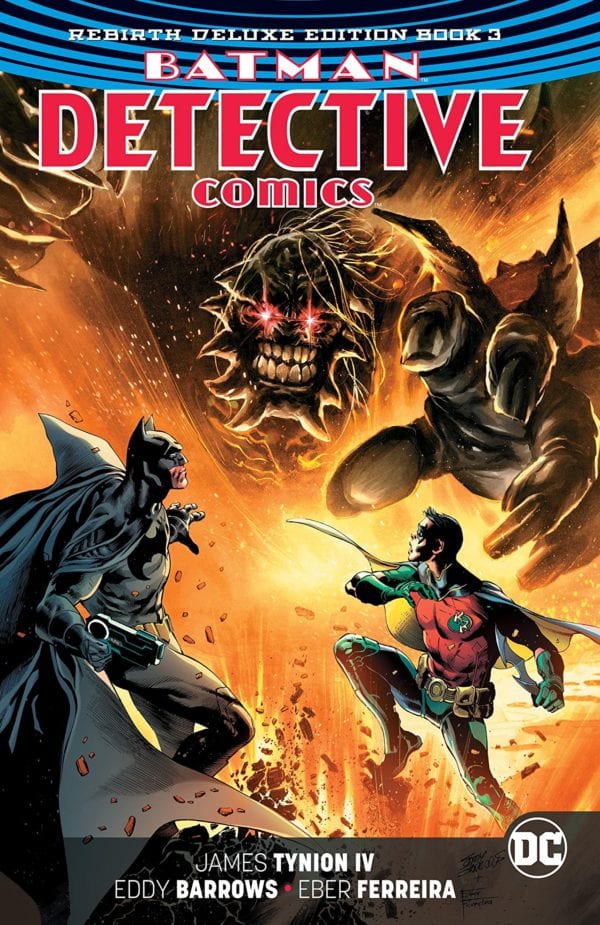 James Tynion IV has really crafted a great Detective Comics story as he tackles the complexities of Batman’s crime-fighting family and their reputation in Gotham City. In the hefty collection of Batman – Detective Comics: The Rebirth Deluxe Edition Book 3, there is plenty for fans to enjoy as Tynion brings back a beloved character with a possible dark future and all the ramifications that brings to the present. Its an action packed book that doesn’t lose sight of its characters or story with some great artwork to boot.

One of the strongest aspects to the book is the focus on the fan-favourite Tim Drake as he makes his return in ‘A Lonely Place of Living’. After disappearing and being thought dead in the first collection, Tim escapes from the clutches of the mysterious Mr. Oz and makes a triumphant return. The only thing to sour it, however, is a future version of Tim who has become Batman, one with corrupted morals and willing to cross any line to achieve victory, even if it means murdering a fellow teammate to prevent a catastrophic future. Tynion really plays with with this alternate version of Tim, combining Red Robin’s intelligence with Batman’s ultra-preparedness but none of the basic morals the Dark Knight holds so high, yet nothing else about him seems out of character. Tynion puts enough of the real Tim Drake into this future version that it seems like the logical path he’d travel in a darker timeline.

The other character Tynion writes very well is Clayface. Since the beginning of his Detective Comics run, Tynion has placed Clayface on a very interesting path towards redemption by focusing more on the man behind the clay, Basil Karlo, as he attempts to overcome his transformation and find a cure. The stories in this book heavily lean on Clayface, especially in the climactic ‘Fall of the Batmen’, and Tynion makes Clayface the most interesting he’s been in years. There’s a great sense of tragedy to the character as he wants to be a better person and make up for his past sins as a supervillain, whether its helping Batman out or comforting one of his victims. The chemistry between Clayface and the other characters, particularly his relationship with Cassandra Cain, is well written and emotive, making many of the character moments with Clayface feel earned.

Tynion has a good handle on the rest of the characters. For such a large ensemble, none of them really get lost in the shuffle even if some characters have smaller roles than others. What is impressive is how well Tynion manages to tie everything in his run together, from Tim’s disappearance, the reemergence of the Victim Syndicate, Batwoman’s loyalties. Everything Tynion has done before pays off very well in this book and doesn’t feel jammed or overcrowded, but completely natural to the story. It’s the mark of a good run that you can go back to the beginning to see how everything played out and built to this point and while this book isn’t the conclusion of Tynion’s Detective Comics, he sets up the end with a great and tragic cliffhanger.

The art throughout the book is very well done as well. From Eddy Burrows, Carmen Carnero, Miguel Mendonca and Jesus Merino, each of the artists provide some great imagery and use their different styles to their advantage. None of their styles feel inconsistent with each other and actually blend well together thanks in part to inkers Eber Ferreira, Diana Eger, Raul Fernandez and colourists Adriano Lucas, Ulises Arreola. Tomeu Morey and Kelly Fitzpatrick to name a few. All the action is depicted well and easy to follow, but the quiet drama scenes are well done too with nice detail on the character’s facial expressions and emotions. The collaboration between all the artists really makes the book a great read.

Batman – Detective Comics: The Rebirth Deluxe Edition Book 3 is a good building point to Tynion’s overarching story. The focus he places on Tim’s return and Clayface’s redemption and how well those two developments tie together reveals interesting facets about the characters that feels natural and earns the emotion behind their respective arcs. The art team elevates the book with their combined imagery, providing both great character work and action sequences. It’s definitely not a book any Batman fan should miss.