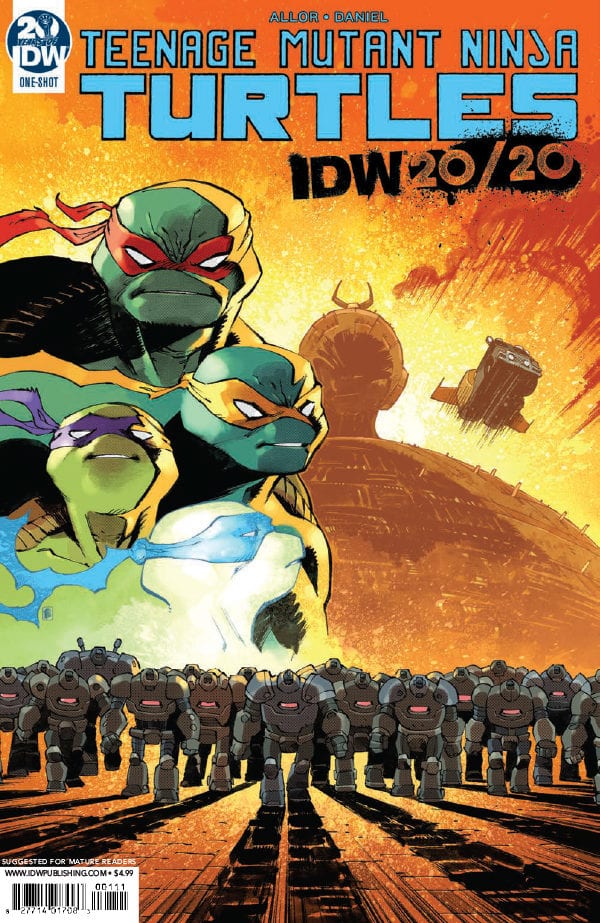 IDW is celebrating their 20th anniversary by writing comics with storylines either 20 years in the past or present. So our favorite heroes in a half shell are fighting to save Europe in the future. If you don’t regularly read TMNT you might get taken aback with reading the typical energetic and bodacious teen mutants appearing much older and maybe even slightly more mature.

Michelangelo and Raphael are in Europe preparing themselves to fight Krang who has an army of krangs. They are aware they are outnumbered and Mikey is relying on Ralph to cook up a plan to ensure their victory. While they are trying to defeat the army of krangs, Mikey is clearly worried about the outcome so he relies on talking to the fourth wall to explain how the aging turtles got in this position in the first place.

As Mikey goes over the timeline and even reminisces about their youth to remind you just how long they’ve been fighting Krang and the all-powerful Technodrome. Krang, still obsessed with terraforming the planet, appears to give the Turtles room for self-doubt as he seems to gain more power and technology.

Writer Paul Allor does a good job to remind you why you love the TMNT, even in their older years. Introducing Sally Pride as a strong leader that the Turtles respect ( and maybe even envy ) while they congregate in confusion is comical. Even though Mikey is the current leader, it’s clear he misses all his brothers fighting together and being in unison. My only question is, did they enjoy the pizza in Italy?