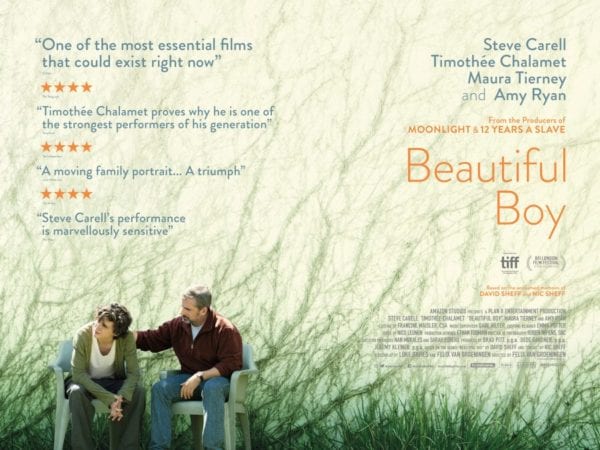 First of all, could you tell us a little bit about how you got involved with this project?

Yeah. My agents brought it to my attention, and I read the two books, and I absolutely loved it. I recognised, through my own history with addiction, [and] felt very strongly the authenticity of the books, and at the same time I was really, really wary about doing this job because I had these strong thoughts that I didn’t want to be pigeonholed, doing another movie with drugs at the centre. [Luke previously wrote the screenplay for Candy, based on his own semi-autobiographical novel of the same name.] I wrestled with this because I was actually, at the time, I was really broke, and I needed a job – [though] this was not a job offer, by the way. It just to go and meet Jeremy Kleiner, the producer, the guy who runs Plan B for Brad Pitt.

Anyway, eventually after a week of wrestling, I said to my agent, “I’m not going to go to this job”, because I just think that it’s a backwards step to write another movie about drugs. She said, “Okay, well I support whatever decision you make, but you should still take this meeting with Jeremy Kleiner because Plan B is the best company in town” – and I said okay, so that was the plan.

Then the night before I went to the meeting with Jeremy Kleiner, my dad sent me an email – a completely random coincidence – my dad sent me an email that just said, “I was sorry to hear Philip Seymour Hoffman died. That’s very sad. I remember the story you told me of having dinner with him in Berlin all those years ago. Luke, sometimes I feel this family is so blessed.” He was referring to the fact that 10 years earlier, Candy – the film I wrote that was about drugs, it was based on my novel about my actual experiences as a heroin addict in my 20s – Candy had premiered at Berlin and one night all the Candy people and the Capote people went to dinner together. Heath Ledger and Philip Seymour Hoffman were both at this wonderful dinner and it was, for me, it was amazing because I’d never had this experience before, red carpet and film premiers and so on.

My dad went straight to that and he was, in that final sentence, “sometimes I feel that this family is so blessed”, he was, in his very quiet, careful way, he was indulging fragile how this whole thing is, the odds of recovering from drug addiction. [After] Philip Seymour Hoffman had died, in the papers all that week it was all about [how] he’d been 22 years clean and sober, and relapsed and was dead less than a year later. At the time I was 23 or 24 years sober and clean, and at that moment it was suddenly like maybe I should try and get this job – because in Candy I had never explored the relationship between the father and the son. In a sense, that was because when I was writing Candy, the novel, back in 2005, 2006, it was too raw and I didn’t know how to deal with writing about that very complex relationship. Here, with these two books about this really complex relationship that were just crying out to be adapted, that’s how it started. 12 hours before my meeting with Jeremy Kleiner, I got that email and when I went into that meeting with Jeremy Kleiner, I’d totally changed my opinion. I thought, “I really want this job”.

Fortunately, I got the job. Then I met Felix, the director. Then the journey began, this backwards and forwards collaboration with Felix across the continent, in different places over the next almost 15 months. The film was forged there. It’s a bit of a long-winded story. It’s just the central fact for me of how I came to be here in this position – the film is out in the world, I co-wrote it and it was an amazing journey. It all started with this. I think it’s if dad hadn’t read the news story or wrote that email, then I’d have just gone in with that initial plan: I’ll meet these people, but I’m not going to take this job.

That leads into my next question – do you think it’s fair to say that the thing that most sets Beautiful Boy apart from Candy is that central focus on a parental relationship? Was it informed particularly by your relationship with your own father at all?

Yeah, it’s absolutely fair to say that. The focus in Candy was the relationship between the couple. The focus in Beautiful Boy is specifically the father/son relationship. The mission statement, in a sense, [for] Felix and I, was that the centre of the film was the relationship between father and son – and more broadly, what’s going on in the family as this cyclone of chaos swirls through their lives. That’s part of the guiding principle that helped us structure the movie. We didn’t want to spend too much time in a kind of ‘drugalog’ with what’s going on for Nic in your Requiem for a Dream sense or whatever, anything like that, but that the love between father and son was the centre of it – and that included the radiant mothers. One of the things I love about the film is that ability to create that radiance. That principle helped us structure the film.

Given how Beautiful Boy focuses so much on fathers and sons, what do you think the film has to say about masculinity? If anything, that is.

That’s a great question. We’re in this really complex moment in which what’s labelled toxic masculinity is suddenly raring up with fangs bared in response to this huge culture shift.

At the centre of this family is this kid who I really related to – it’s one of the things that made the journey of writing the script really amazing – this skinny, deathly boy who wants to be a writer and he’s very sensitive. I feel like that describes how I felt or what I felt like at 18, 19, 20 years old, just trying to find his way and he’s trying to define himself and his life separately to his ultimately very loving upbringing and environment.

I think what happens because of his drug addiction, and in the story we try to tell, is that kind of surrender to full barred addiction will distort one’s masculinity – or in a sense really, one’s humanity, because he becomes his actions. That’s what happens in addiction. His actions are catastrophic and so what I find really interesting about the story is that it’s more about the challenge to David’s masculinity, the father. This is the guy that’s basically a really alpha male who is used to solving all problems that come his way. 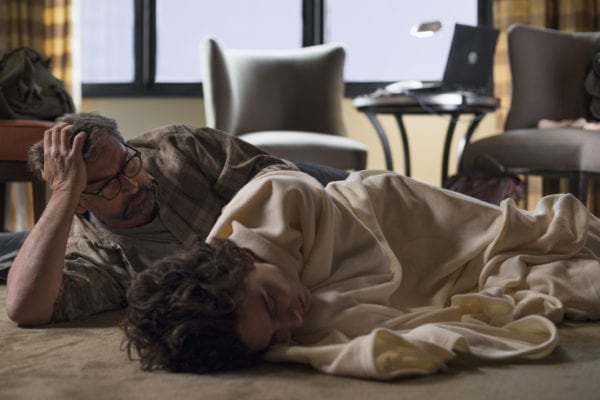 And here’s a problem that his sheer force of will can’t overcome.

Yeah, the movie is about this force that he encounters that he cannot solve. He can’t decipher it. He can’t decrypt it. He can’t find message. He can’t defeat with logic or reason, and it defeats him at every turn. His alpha masculinity is completely broken down by this situation which arrives in his family. That’s what I loved; it’s the central drama of the film. That’s the thing that happened in my life – [it’s] my guilt and shame retrospectively about the chaos that I caused in my family. It was something that was still so fresh when I wrote Candy that I didn’t approach it. Suddenly this opportunity for telling this new story it came to me, and it was about exactly that. That’s when I went from resisting it to seeing okay, this is a blessing. I should really move into this story and not away from it.

Just on the flip side, quickly – given the film is so focused on those two male characters, were you concerned particularly about trying to find a space for the female characters?

Yeah, really concerned. It pains me that, for simple reasons of cinema real estate, we weren’t able to expand those two amazing roles for Nic’s stepmother, Maura Tierney, and his mother, Amy Ryan. I love those characters, they’re so fierce and complex, and also I love both actors. It was a real challenge. [An] earlier draft, which was like a pre-draft, was a crazy 180 pages where Jeremy Kleiner had said to me, “for the very first draft, do not seek a page count. Just get all the things in there that we talked about that we talked about in the treatment”. It was like, “okay, here’s 180 pages”, which is completely crazy. The stories of the mothers were much broader – they’re much denser and more detailed in those earlier drafts.

In the whittling down process, we had very painful experiences having to ‘kill the baby’, as that expression goes, and get rid of scenes that we really, really loved. There was this amazing scene – it came out of real events in Nic’s book – Nic tweaking so badly on crystal meth that he’d gone home to his mother’s house to steal stuff, and had all this stuff piled up in the yard, but he’d somehow lost his mind and climbed up in the rafters of the garage. Once she came home, he was up there like a wild animal in the rafters babbling, [telling] her that she had to call the police. It was a distressingly awful situation. Cinematically, it was an amazing scene about her distress, but it’s just an example of many, many threads that we had to lose because our central world had to be the father/son relationship. That’s what the two books were about.

On another note, before this interview I read David Sheff’s original article that inspired his book, and your script for Beautiful Boy, and I noticed that in a lot of your stage directions you used the same imagery and descriptions that he did. Was that an intentional choice, to foreground David’s experience?

Yeah, it was really deliberate. The books were such a rich art form. The books are so rich and vivid and well written, they’re like a gift in terms of their electric brilliance. The challenge was the fact that they’re so good and there’s way too much stuff to choose from. There’s an abundance of riches and yet the problem was oh, my God, how to whittle it down, how to reduce it, reduce it, reduce it to the most central element of the story. We wanted to avoid things that felt like we were treading water with repeated beats – one of the problem with making addiction stories cinematic is that the behaviour is extremely compulsive and repetitive.

But, yeah, I made liberal use of the descriptions in the two books. It’s not just David’s. Yes, all over the script there are things that I’d just taken directly from David’s amazing descriptions of what was going on, but also from Nic’s. David’s book is more measured and it’s very measured in its description of the emotional distress of the family. Nic’s book is way more kinetic and chaotic. It’s a great book, describing the chaos that he was experiencing.