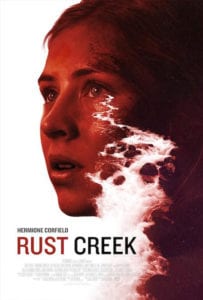 An overachieving college student gets lost on her way to a job interview. A wrong turn leaves her stranded deep in the Kentucky forest. The woman must defend herself against the harsh elements and a band of ruthless outlaws. She is forced into an uneasy alliance with a strange loner who has unknown intentions. 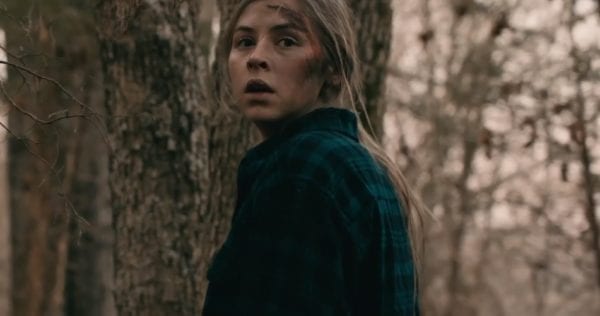 “Rape revenge” is the murkiest of horror’s tangential offshoots when it comes to intent, portrayal, and execution. Granted, Jen McGowan’s Rust Creek avoids such classification/stigmatic label – but how quickly this review’s tone could have changed. An independent girl’s backwoods road trip features all the trappings of I Spit On Your Grave: Wrong Turn, Baby. Good thing Julie Lipson’s screenplay (story by Stu Pollard) is a smarter bear trap, teasing an assault that could have been – one handsy motion aside – while still achieving *and earning* endangered escapist thrills. Brutality through endurance, always mindful of telling our protagonist’s story without (literally) stripping her bare-vulnerable for the misconstrued sake of character building.

In other words, the power and necessity of female creative direction.

Actress Hermione Corfield graduates from roles like “A-Wing Pilot Tallie” in Star Wars: The Last Jedi and “Record Shop Girl” in Mission Impossible – Rogue Nation to leading lady Sawyer. She’s a track athlete, collegiate overachiever, and has just earned an important job interview in Washington D.C. Wasting no time – even on Thanksgiving break – she hops in her red SUV and speeds towards professional dreams. Unfortunately, it’s a holiday weekend which means traffic jams clog major motorways. Sawyer gets lost deep in Kentucky’s desolate forest landscape thanks to a shortcut, where she encounters “good samaritans” Hollister (Micah Hauptman) and Buck (Daniel R. Hill). Quotations intended because this is where her fight for survival begins.

McGowan’s gender perspective benefits Rust Creek from the moment we first catch Sawyer running laps. She’s hardly a victim prototype. Her grey sweats define an ambitious, hungry student as impulsive as she is determined. No sexual objectification; no cringy leers as the camera pans over cleavage or tightly tucked booty shorts. Sawyer is a fighter of her own volition. No tragedy needed to spark her street fight against Hollister and Buck when they cross a line of decency. No monumental character shift required to paint Sawyer as the stone-cold badass she is from “Scene One,” while she rips off broken fingernails and endures festering wounds with nary a wince. Proof you can plot a woman’s embattled character arc *without* forced traumatic abuse of a sleazebag variety and *still* have her go through hell. 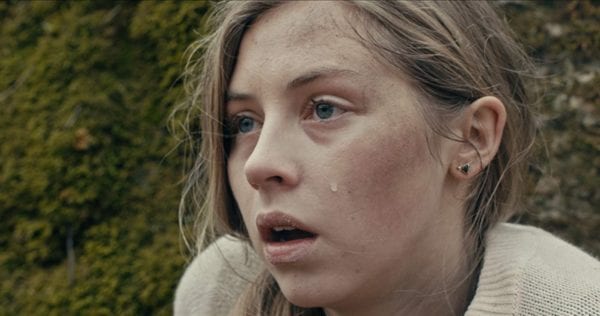 As Deliverance notes embroil a small town’s drug ring – American production meant to compete with incoming cartels – Rust Creek morphs from survival horror to possible kidnapping to unlikely companion piece. Hollister and Buck won’t take kindly to finding Sawyer – the latter who escapes their search party canvassing after nearly being crushed by her cliff-diving automobile – but the boys’ meth chef cousin Lowell (Jay Paulson) offers sanctuary. He cleans Sawyer up and stashes her from sight. Sawyer and Lowell’s chemistry cycles through stages of initial fear – lingering distrust – until Sawyer realizes her only hope is the pale lackey mixing toxic chemicals in a trailer. As Sawyer studies Lowell’s racket to pass the time, Corfield works with Paulson to enhance an already complicated scenario through best-case partnering.

Sawyer’s safety bakes into every nook and cranny of Rust Creek’s conflict. Hollister and Buck risk their illegal operation if she’s still alive, pushing Hauptman’s performance towards aggression as clues materialize (Lowell won’t event invite ‘em inside for a beer). With a missing girl in his backyard, Sheriff O’Doyle (Sean O’Bryan) starts sniffing around Hollister’s business – layering skittishness and paranoia into Hauptman’s powderkeg unease. Not to mention Lowell’s wellbeing hangs in the balance since he’s harboring a witness, which Paulson draws upon to make a case for his character’s “good guy” plea.

A stowaway girl, an impending drug deal, suspicious lawmen – McGowan gently folds these ingredients together as not to burst pocketed bubbles of tension whenever visitors disturb Lowell’s hideaway.

McGowan’s locational exploitation makes use of isolation, framing, and nature to intensity Sawyer’s lonely predicament. Through her point of view, the camera gazes upwards as branches click together like outstretched arms as in The Blair Witch. Rocky ravines provide both safe havens for tucked-away rest and dangerous terrain as Sawyer injures herself climbing. One can easily believe Hollister and Buck could carry out their illicit activities given zero neighboring eyes for miles just as we can buy how Sawyer’s predicament can’t easily be solved by sprinting out of Lowell’s kitchen. No connection to outside civilization, no plausible escape without aid.

Rust Creek doesn’t redefine outsider thrillers hinged on close-knit – and corrupt – communities, but it does exemplify why gender representation behind camera lenses becomes so essential. We’ve seen the male-written, male-directed version of Rust Creek countless times with plenty more skin. Jen McGowan empowers Sawyer instead of unimaginatively victimizing her, albeit a painful and arduous journey. Hermione Corfield explores this character who’s hunted simply out of wrong place, wrong time odds, only to find grit-spittin’ strength early and often. A breath of fresh air for films of this relative nature, not to mention how tension sneaks up like a trapper on the prowl.