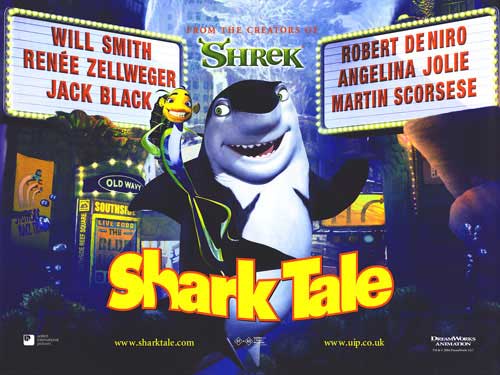 Shark Tale is unique in the shark movie genre, in that it takes the more traditional idea of sharks as movie protagonists, and subverts it into an animated children’s tale about the importance of being true to oneself – as opposed to pretending to be something you are not. This is layered with elements featuring the need to allow people to be different, and to not limit the potential of any individual. It is directed by Vicky Jenson, Rob Letterman and Bibo Bergeron, from a script by Letterman, and Michael J. Wilson.

The lead character of Shark Tale is a bluestreak cleaner wrasse named Oscar (voiced by Will Smith), who works at the local Whale Wash, while dreaming of fame and fortune. His best friend is an angelfish named Angie (Renee Zellweger), and she has a notable but secret crush on him. Oscar runs into debt with his boss, Sykes (Martin Scorsese) who operates as a loan shark, in addition to running the Whale Wash. Oscar’s attempts to gamble his way out of this trouble backfire, and cause more problems.

Oscar crosses paths with two sharks named Lenny (Jack Black) and Frankie (Michael Imperioli). They are the sons of Don Edward Lino (Robert De Niro), who heads up a particularly dangerous and brutal organised crime syndicate. Oscar is being tortured by two jellyfish associates of Sykes, but they flee when they see the sharks approach. The situation brings tensions to a head between the shark brothers, though.

While Frankie is a very violent heir to Don Lino’s criminal legacy, Lenny is a gentle-natured vegetarian who is constantly pressured and ridiculed by his dangerous family. On seeing Oscar being accosted, Lenny moves to help him, and Frankie becomes angered in his frustration at Lenny’s natural inclination to care about others. He charges at Oscar, but is accidentally killed by an anchor. Lenny flees the scene, and passing creatures see only Oscar with Frankie’s corpse. Oscar then becomes famous, and known as the ‘Sharkslayer.’

While Lenny and Oscar bond over their mutual secret, and Oscar takes full advantage of the fame and fortune he has stumbled into, the death of Frankie brings Oscar into conflict with Don Lino – who takes Angie hostage in retaliation. During an attempted rescue, a chase sequence ensues, and Oscar eventually traps Don Lino and Lenny inside the Whale Wash. With his community looking on, Oscar monologues to Don Lino about the virtues of Lenny, and the importance of accepting people for who they are. Don Lino concedes, and embraces Lenny, while Oscar makes peace with the sharks, Sykes, and Angie. And they all live happily ever after.

It is this redemption of the toothsome protagonist that adds to the uniqueness of Shark Tale within the shark movie genre. While it is the nature of most shark movies to see the protagonist retain its dead-eyed, cold-blooded killer status, the fact that Shark Tale is an animated family film means that the narrative can use that well-worn preconception to make its point in an even more dramatic fashion. 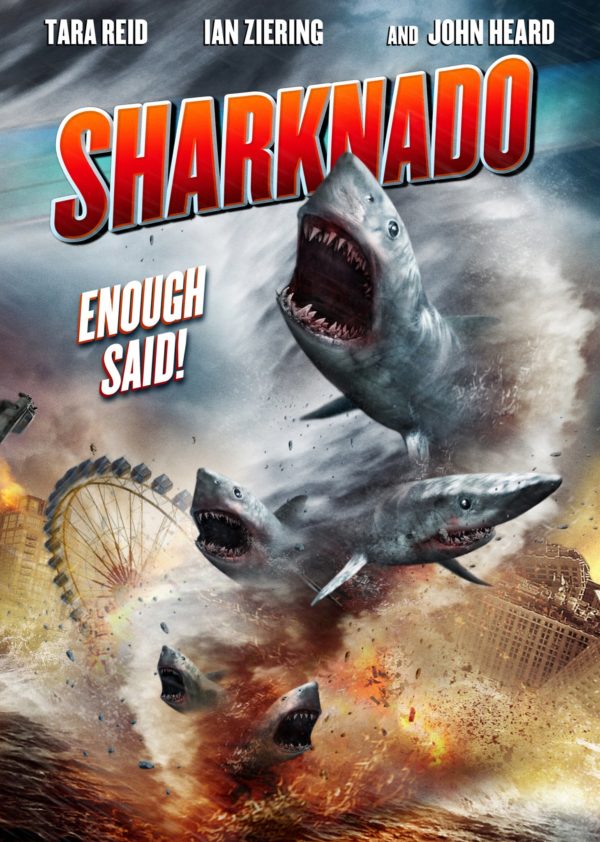 Many shark movies come in for ridicule – but few reach the heady, risible heights of Sharknado – a made-for-television, Syfy-network commissioned film so spectacular it has spawned five sequels in five years. The premise of this first film – written by Thunder Levin, and directed by Anthony C. Ferrante – sees a bizarre atmospheric phenomenon strike Los Angeles, causing a series of water spouts to form. These spouts suck hungry sharks out of the ocean, and bring them inland, in tornadoes and flood-water. A bar on the boardwalk, owned by Fin Shepard (Ian Ziering), is destroyed, and he sets off with a group of his friends/patrons to rescue his ex-wife, April (Tara Reid), and their teenage daughter.

There is very little else that needs to be said about the actual plot of the film, since it so closely resembles that of every other disaster movie in which a man is suddenly filled with the urge to prove himself to his ex-spouse by saving the day. The reason that Sharknado warrants inclusion in any list of notable shark movies is because it literally flips one of the core elements of the genre, and bases its entire concept on that subversion.

Most shark movies – particularly those that are high profile and well-known within popular culture – are based on human interaction with sharks taking place in shark territory. People, either on or in the water, are forced to reckon with these predators – placing those people in a situation where they are battling both a foe and the environment at the same time. In these instances, the sharks have the home-field advantage, as it were, and this is a key feature of the genre. 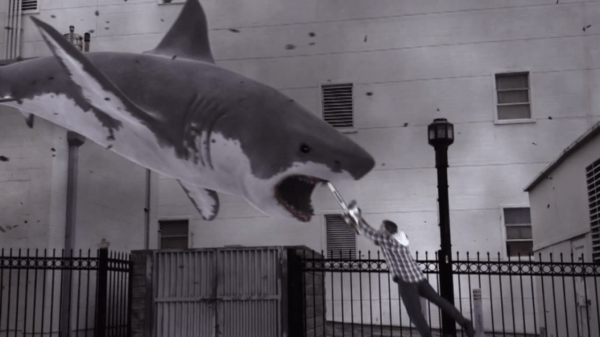 Sharknado subverts that entirely, by manufacturing a scenario in which the sharks are the territory invaders. The humans have the home-field advantage, and so we are given a tale that allows for sharks to be fought with military-grade bombs and a variety of other hardware, as opposed to those options being limited by a marine environment, in which such weaponry has to be improvised (as in Jaws). Though its premise is ridiculous, it does still manage to layer in some bigger themes, however – most notably that of climate change, as with any film about extreme weather in the modern age.

Indeed, Sharknado is proof that even the most outlandish B-movies can still deliver narratives that stand as significant contributions to the parent genre. Just when you thought it was safe to dismiss it…

A version of this article was originally posted in March 2018.